Emma Hinze and Pauline Sophie Grabosch gave the home fans something to cheer about Wednesday at the Berlin Velodrome on the opening day of the track cycling world championships.

Hinze and Grabosch beat defending champions Stephanie Morton and Kaarle McCulloch of Australia to win the gold medal in the women's team sprint, giving them a big boost of confidence ahead of the Tokyo Olympics. It was a strong ride by the duo from Germany, who have replaced Olympic bronze medalists Kristina Vogel and Miriam Welte in the event.

“It felt like I was flying around and around,” Hinze said with a breathless grin. “It's awesome to race in front of the home crowd, in front of family and friends. I've never felt that happy after a race.” 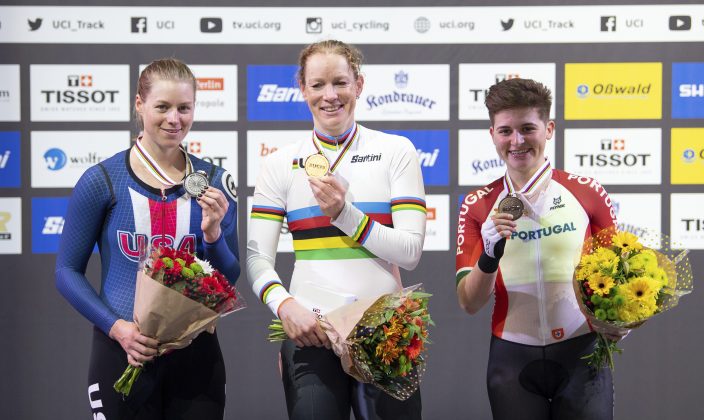 Winners pose with medals on the podium, with let to right, Jennifer Valente from the USA 2nd place, Kirsten Wild from the Netherlands 1st place, and Maria Martins from Portugal 3rd place, after medal presentation for the World Championships Scratch women's track cycle race in Berlin, Germany, Wednesday Feb. 26, 2020. (Sebastian Gollnowdpa via AP)

Germany finished in 31.163 seconds, 0.221 seconds ahead of Australia. China beat Russia for bronze.

“I guess it's a dream, which became true, and we're still speechless,” Grabosch said.

Several world records were broken Wednesday, including in the men's sprint, where the Netherlands set one during the heat races and then shattered its own mark with a time of 41.225 seconds to capture its third straight gold. 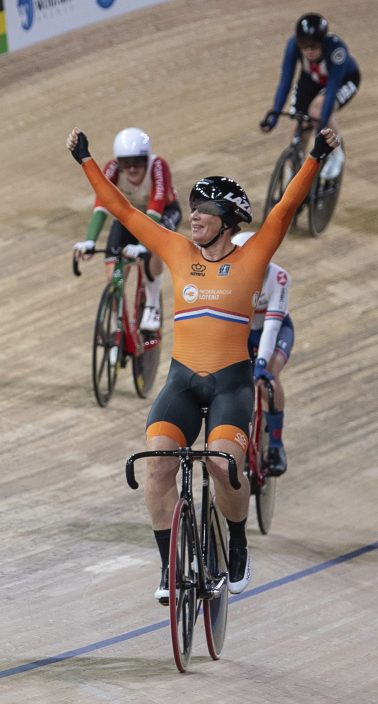 The team of Jeffrey Hoogland, Harrie Lavreysen and Roy van den Berg opened a quick lead over silver medalist Britain, then stretched it to more than a half-second by the end of the second lap. The final lap was merely a race against the clock as the trio of Dutch riders stormed across the finish line and thrust their arms in the air.

Australia captured its second medal of the world championships by beating France for the bronze.

Earlier in the day, the Danish men's pursuit team of Lasse Norman Hansen, Julius Johansen, Frederik Rodenberg and Rasmus Pederson broke the world record in qualifying. Then, the quartet lowered their time to 3:46.203 in the heat races to advance to the gold-medal race Thursday against New Zealand. Italy will face Australia for bronze. 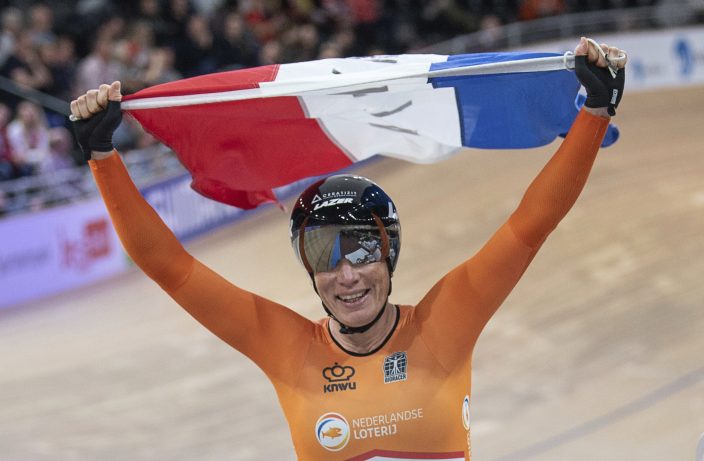 In the women's scratch race, Dutch standout Kirsten Wild went to the front in the closing laps and held off the rest of the field to win gold. Valente took second and Maria Martins of Portugal was a surprising third.

All eyes in the scratch race were on British star Laura Kenney, the gold medalist in both team pursuit and the omnium at the past two Olympics. The 27-year-old Kenney fractured her scapula in a crash at a World Cup event in Canada last month, but she opted against surgery so she could continue her preparation for the Tokyo Games. 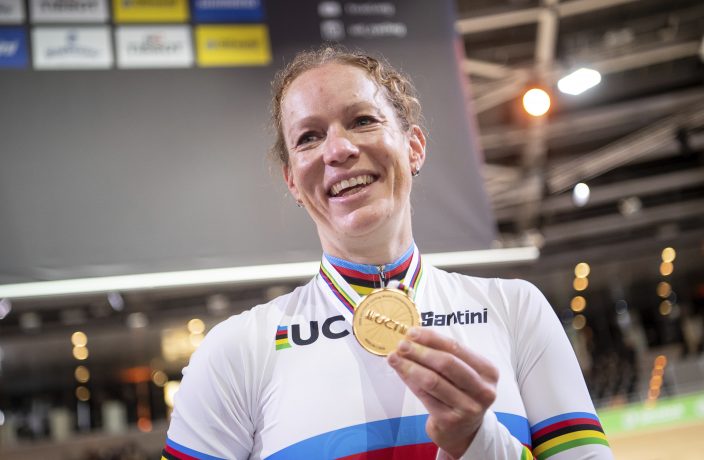 Kenney controlled the tempo for most of the 40-lap scratch race, and she came to the front with three to go. That pushed Wild to the outside, but the 2018 world champion had plenty of power to go the long way to the lead.

Wild held the rest of the field at bay to take the first gold medal of this year's world championships. Valente and Martins pulled alongside Kenney just before the line, sending her off the podium in fourth place.

“I'm super happy I could hold them off in the sprint and I could take the win,” said Wild, who finished second a year ago. “My strength is the sprint so for me it was perfect that the race was fast. There weren't too many attacks. It was perfect."