St. Louis Blues defenseman Jay Bouwmeester has been ruled out from returning to play in the regular season or in the playoffs.

General manager Doug Armstrong made the announcement on Wednesday.

In a news conference at the Enterprise Center, Bouwmeester spoke to reporters for the first time since he collapsed on the bench in the first period during a game at the Anaheim Ducks on Feb. 11. 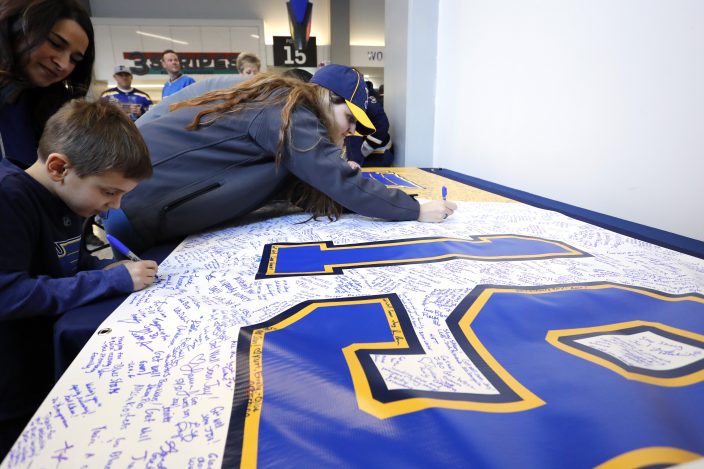 Fans sign a banner sending well wishes to St. Louis Blues' Jay Bouwmeester prior to the start of an NHL hockey game against the Nashville Predators Saturday, Feb. 15, 2020, in St. Louis. Bouwmeester suffered a cardiac episode while on the bench during a game Tuesday, Feb. 11, 2020, in Anaheim, Calif. (AP PhotoBilly Hurst)

"It was a scary thing, but its been going pretty good lately," he said. “We'll continue to evaluate things as it goes. I'm at the point now where I feel pretty good.”

Armstrong discussed Bouwmeester's status for the remainder of this season.

"To clarify, Jay and I have both spoken over the last week or so,” Armstrong said. “We both understand that he won't participate in the regular season or playoffs for us. We've talked about longer-term things that may or may not happen, but we both feel, it's February. We don't have to make long-term decisions at this point. He's going to take time, get back in with his family and be around the team and he'll address those things as the summer progresses.” 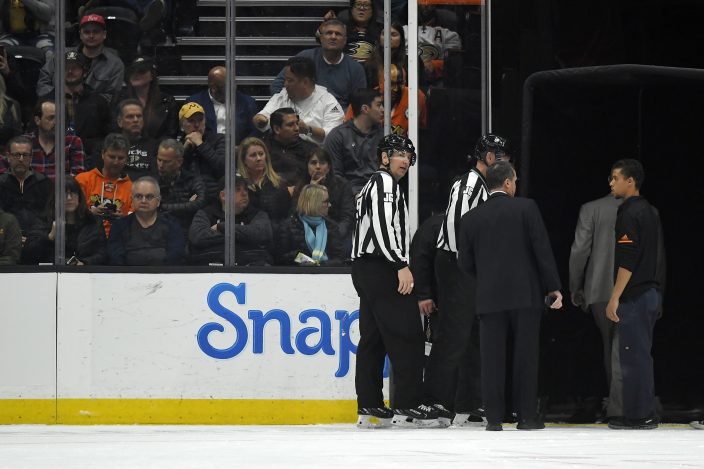 Officials leave the ice after the game between the Anaheim Ducks and the St. Louis Blues was postponed following a medical emergency involving Blues defenseman Jay Bouwmeester during the first period of an NHL hockey game Tuesday, Feb. 11, 2020, in Anaheim, Calif. (AP PhotoMark J. Terrill)

The Blues were hosting their annual fathers trip when they played in Anaheim.

Bouwmeester said there was no warning anything was about to happen.

"Everything up to that point was normal," Bouwmeester said. “I hadn't been sick, or had much going on. It was completely out of the blue.” 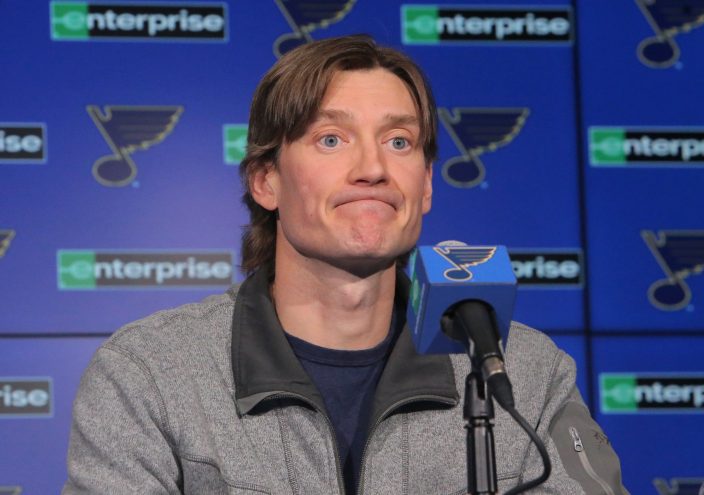 St. Louis Blues defenseman Jay Bouwmeester reacts to a question about his injury during a press conference, Wednesday, Feb. 26, 2020, at the Enterprise Center in St. Louis. Bouwmeester says he is feeling better since suffering a cardiac episode during an NHL game, but he is not ready to make a decision on his hockey future. Bouwmeester commented publicly Wednesday for the first time since he collapsed on the Blues' bench during a game at Anaheim earlier this month. (J.B. ForbesSt. Louis Post-Dispatch via AP)

Bouwmeester said he's been moved by the response he has received from people.

"The outreach and support people have shown has been pretty overwhelming," Bouwmeester said. "The people that were around at the time, as well as my dad being there on the trip, there were a lot of things that were absolute best-case scenario. He was able to relay information and that was extremely helpful to everyone.

“It's all been so humbling. It's a small world. People really do care.”

The 36-year-old Edmonton native was hospitalized at the UC Irvine Medical Center in Orange County, California, and spent five nights in the hospital. Bouwmeester had a cardioverter defibrillator implanted into his chest. It is a device that monitors heart function. It also can deliver a shock to the heart if an arrhythmia happens to restore a regular heartbeat.

“I'm at the point now that I feel pretty good,” Bouwmeester said. “The weird thing about this whole thing is you go from something that happened totally out of the blue and unexpected to being in the hospital for a couple of days. Now there are some restrictions as to what I can do. But I feel pretty normal. That's a good thing.”

Bouwmeester said he hasn't thought about his future in the sport.

The game in which Bouwmeester collapsed was postponed. It will be played March 11. It will begin with a 1-1 score, as it was at the time of the postponement, but still follow a full 60-minute format.

The Blues have placed Bouwmeester on long-term injured reserve. St. Louis has since acquired defenseman Marco Scandella from the Montreal Canadians for a 2020 second-round pick and conditional 2021 fourth-round pick.

Bouwmeester is an unrestricted free agent after this season. He signed a one-year deal for $3.25 million for this season.

In his 17-year NHL career, Bouwmeester has played 1,240 games. He has 88 goals and 336 assists. He was a first-round pick by the Florida Panthers. From 2004 to 2014, Bouwmeester played in 737 consecutive games, the ninth-highest total all time.

He missed only four games last season, when the Blues won the franchise's first Stanley Cup.

The Burton snowboard company is do ...

Bouwmeester back in St. Louis, 'on the road to recovery'