George Springer could only stand there all alone and listen.

The Houston Astros leadoff man had no choice when he stepped into the batter's box a bit too early and was showered with loud boos Wednesday at an exhibition game against the New York Mets.

Mets pitcher Noah Syndergaard turned and looked at the scoreboard clock that showed 1:09 p.m. — he waited for the minute to change so the game would officially reach the 1:10 start time, leaving Springer nowhere to go as the crowd heckled him. 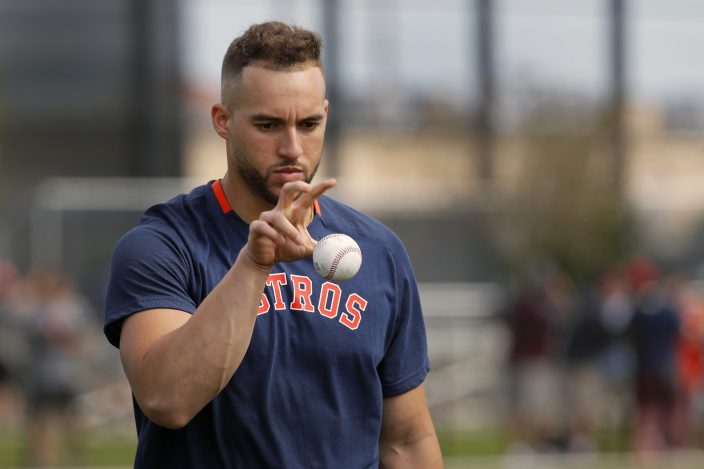 The normal tranquility of a February game again was broken as a split squad of Astros continued the team's latest stop on their spring training tour of derisive boos and catcalls, the result of their exposed sign-steal scheme.

Two days after José Altuve, Alex Bregman, Carlos Correa and Yuli Gurriel got jeered for a game at Detroit's park in Lakeland, it was the Mets' turn to host at newly renovated Clover Park. 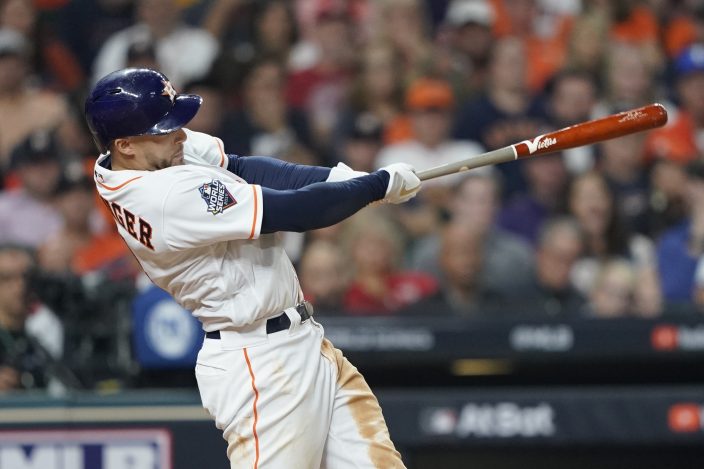 FILE - In this Oct. 22, 2019, file photo, Houston Astros' George Springer hits a home run during the seventh inning of Game 1 of the baseball World Series against the Washington Nationals in Houston. Springer asked for a raise from $12.15 million to $22.5 million and was offered $17.5 million in the biggest gap. (AP PhotoDavid J. Phillip, File)

Vilified this offseason by the baseball world due to the their scam, the Astros brought a pedestrian lineup from their West Palm Beach complex to face the Mets. Springer and fellow outfielder Michael Brantley were the top Astros who started.

So it wasn’t mainly the names on the back of the jerseys that angered the small mid-week crowd in attendance at New York’s spruced-up ballpark, which had $57 million of renovations and additions put in starting a year ago.

It was the logo and colors worn by Houston, ironically a similar orange-and-blue color pattern to what the Mets wore.

Jim Masotti, a Connecticut native who lives in Port St. Lucie seven months of the year, sported a dark New York Yankees T-shirt and deplored the cheating scam. But he stopped short of saying the title should be stripped from the Astros.

“As a Yankees fan, it’s extremely discouraging,” said Masotti, who followed Springer's career as a star at UConn. “I think it’s a travesty for the integrity of baseball. What happened is something that may not go away for a while, unfortunately.”

After Springer worked a two-out walk in the bottom of the ninth inning in Game 6 of the AL Championship Series in Houston last October, Altuve hit a walk-off homer off Yankees reliever Aroldis Chapman that sent the Astros to their second World Series in three years.

“The Yanks ended up being on the short end of this whole thing. As a Yankees fan, I’m very disappointed,” Masotti said.

A native of New Britain, Connecticut, and the MVP of 2017’s scandalous World Series, Springer drew the loudest boos. He had three at-bats and departed after a fifth-inning bloop single.

“The only guy I feel for — I’m a UConn alum — is Springer. I saw him play in college. I feel bad for him, I really do,” Masotti said.

Springer flied out in the first, and Brantley batted next. Brantley grew up playing baseball in this area, starred in high school in nearby Fort Pierce and is an offseason resident of Port St. Lucie.

Despite the local roots, he also drew a heaping dose of boos from his locals, though not like Springer did. Brantley joined the Astros last year and struck out to end the World Series.

The Astros did have a few supporters.

Wearing a dark Astros T-shirt with the No. 1 of Correa on the back, Jeff Edwards traveled from his home in Cypress, Texas, to see the club in spring training.

“I wanted to come over and support them,” said Edwards, who was taking in spring training for the first time. “There’s joking, but there always is. We knew this was coming.”

Edwards questioned why Houston would try to pull off such a stunt – “It’s a damn stupid scheme,” he reiterated – and said many of the Astros on the field receiving criticism don’t deserve it.

“Many of these players weren’t even part of it, and they’re getting the brunt of it,” he said. “But the Astros have a chance now to go out and prove how good they really are."

NOTES: Mets GM Brodie Van Wagenen said the prognosis on J.D. Davis (jammed left shoulder) was encouraging. “He got an MRI today, and it didn’t show a ton of inflammation, which is good. ...V ery positive. Sounds like we’re in a pretty good spot,” Van Wagenen said. Davis began rehab Wednesday; the team will reassess the outfielder in a week. ... Syndergaard made his spring debut with two scoreless innings, allowing a hit while fanning two.