Leaders of a new Salt Lake City Olympic bid committee vowed Wednesday to be transparent and frugal as they design a plan based around existing venues and experience from hosting the 2002 Winter Olympics but that will also include new, modern ideas.

The committee held its first meeting as it sets out to assess whether Salt Lake City should bid for the 2030 or 2034 Winter Olympics. There's no timeline for that decision.

Committee chair Cindy Crane told board members that every conversation they have about the Olympics should be considered public as the part of a completely open process. Crane, a former CEO of a major utility company, said after the meeting that the remark was made to establish ground rules and was not a direct reference to a bribery scandal that nearly derailed the plans for the 2002 Winter Olympics hosted by Salt Lake City.

FILE - In this Feb. 9, 2002 ,file photo, Georg Hackl, of Germany, speeds past an Olympic logo during a practice run for the men's singles luge at the 2002 Salt Lake City Winter Olympics in Park City, Utah. Salt Lake City may shift its focus to bidding for the 2034 Winter Olympics rather than the games four years earlier following the announcement last month that Sapporo, Japan will bid for 2030, organizing committee members said Wednesday, Feb. 12, 2020. (AP PhotoElise Amendola, File)

But, she said, “The strength of our operating principles are to make it very, very clear that those days are well behind us and not in our path forward."

The bribery scandal broke in 1998, three years after Salt Lake City was chosen over cities in Canada, Sweden and Switzerland. Salt Lake’s bid committee doled out $1 million in cash, scholarships, medical care, gifts and other favors to International Olympic Committee members and their families. That included ski trips, NBA tickets, plastic surgery, knee replacements, violins and housing and salary for children of IOC members, according to report by an ethics panel.

It led to the expulsion of six IOC members, the resignation of four others and severe warnings for several others, though none faced criminal charges. U.S. prosecutors brought criminal charges against two Salt Lake bid leaders, but both men were acquitted by a judge halfway through a federal trial. 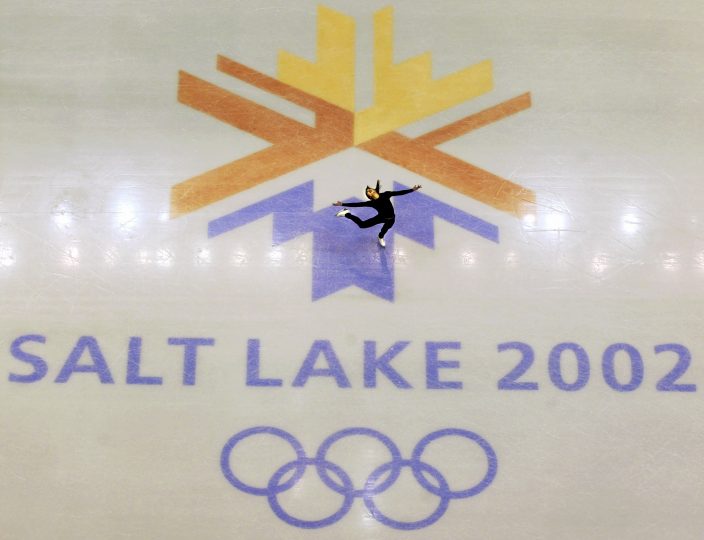 Now decades later, the IOC is struggling to find cities willing to take on the financial and societal burden of hosting the Winter Olympics while also having the climate and venues needed for winter sports. Utah has estimated it could host the games for about $1.4 billion, a figure that would be far less than other cities since Utah would use venues built in 2002 that have been maintained.

An exploratory committee estimated it would cost about $10 million to put together a bid, but it might only cost half of that, said Fraser Bullock, president of the committee and key organizing player in Salt Lake City's 2002 Olympics.

The U.S. Olympic and Paralympic Committee chose Salt Lake City two years ago over Denver and Reno, Nevada, as the next American city to bid for a Winter Olympics, but hasn’t chosen which year it wants Utah to pursue.

Sapporo, Japan, said earlier this year it will bid for the 2030 Games. It's unknown when the IOC will choose hosts for the 2030 and 2034 Games because it recently abandoned its old practice of awarding Olympics every two years, and seven years ahead of the games themselves.

Bullock said it's imperative that the committee start thinking creatively how to make sure a second Olympics in Salt Lake City would be fresh and new and not just a repeat of 2002. He floated the idea of having an event in downtown Salt Lake City, such as the “Big Air” snowboarding competition. Another idea would be to have outdoor hockey at the area's soccer stadium used by Real Salt Lake of Major League Soccer, he said. A slew of new sports have been added to the Winter Olympics since Salt Lake City hosted, he said.

“It's very compelling to have the new disciplines and move them around to different places, engage the community,” Bullock said. “The IOC loves to see community engagement.”

How would overwhelmed hospitals decide who to treat fir ...

A nurse with asthma, a grandfather ...

Celebrity birthdays for the week of April 5-11

Celebrity birthdays for the week o ...