Philadelphia All-Star center Joel Embiid sprained his left shoulder in Wednesday night's game against the Cavaliers, adding another worry for the 76ers, who are already without guard Ben Simmons.

Embiid collided with Cavaliers center Ante Zizic while being fouled late in the first quarter. The 7-footer held his shoulder in obvious pain but stayed in the game and missed both free throws.

The Sixers pulled Embiid at the next time stoppage and he walked to the locker room while rubbing his shoulder. He briefly returned to the bench in the second quarter, but went back for more evaluation and treatment. At halftime, Embiid rejoined his teammates on the bench with a wrap on his injured shoulder. 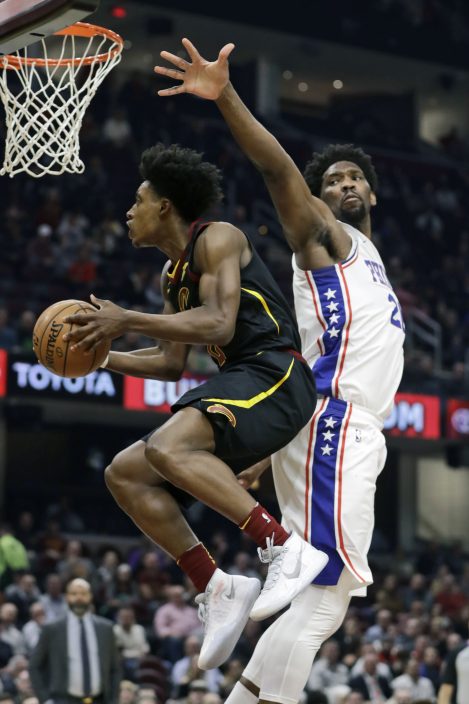 Cleveland Cavaliers' Collin Sexton, left, drives to the basket against Philadelphia 76ers' Joel Embiid in the first half of an NBA basketball game, Wednesday, Feb. 26, 2020, in Cleveland. (AP PhotoTony Dejak)

The Sixers didn't give any specifics on Embiid other than to say his shoulder was sprained and he would not return.

His injury comes as the Sixers are preparing to play an indefinite period without Simmons, who missed his second straight game because of a nerve impingement in his lower back. The team hasn't given a timeline on when Simmons will be back.

After facing the Cavs and the New York Knicks on Thursday, Philadelphia will begin a four-game road trip in Los Angeles on Sunday. The Sixers have struggled this season away from home, where they are 27-2.

How would overwhelmed hospitals decide who to treat fir ...

A nurse with asthma, a grandfather ...

Celebrity birthdays for the week of April 5-11

Celebrity birthdays for the week o ...