New York's governor says he believes President Donald Trump is punishing his home state for being too liberal.

In the past few weeks, New York has come out on the losing end on a series of federal acts.

The Army Corps of Engineers slashed funding for a study of a colossal offshore sea wall that could potentially protect New York City from major hurricanes after Trump tweeted it was “costly, foolish,” and would also “look terrible.” 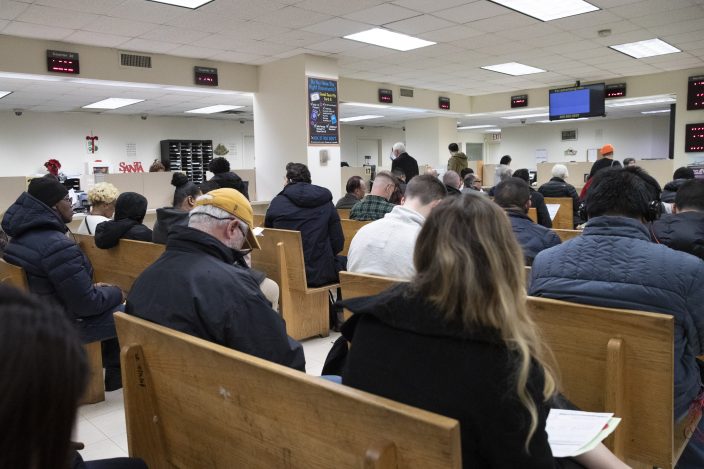 FILE - In this Dec. 16, 2019, file photo, people wait to be served in a Department of Motor Vehicles office in New York. New York Gov. Andrew Cuomo told reporters Wednesday, Feb. 26, 2020, that President Donald Trump is punishing blue states, including New York, over their politics as the president runs for re-election. Among the policies in New York the Trump Administration are unhappy with are a new state law allowing undocumented immigrants to obtain driver's licenses and barring federal officials from accessing the state motor vehicle database. (AP PhotoMark Lennihan, File)

“Sorry, you’ll just have to get your mops & buckets ready!” the president wrote.

Earlier this month, the Department of Homeland Security barred New Yorkers from enrolling in federal security programs for trusted travelers, a move taken in retaliation for a new state law that let unauthorized immigrants get driver's licenses and barred certain federal agencies from accessing the state's motor vehicle database.

State transportation officials have also complained that federal highway officials are holding up approval of a plan to reduce traffic congestion in New York City by charging new fees to drive in certain pats of Manhattan.

Gov. Andrew Cuomo and other state Democrats said Wednesday it's all evidence that the Republican president is punishing blue states including New York over their politics.

“I think the presence of their political motivation has been documented over and over again,” Cuomo said.

Trump has made his disdain for New York's Democratic leaders plain, calling them “sleazy," inept and worse. He called New York City Mayor Bill de Blasio the “worst mayor in the history of New York City.” He announced last fall that he'd change his residency to Florida. And he tweeted recently that “it’s very hard” to work with New York's leaders.

“All they do is sue me all the time!” he tweeted, not untruthfully.

The state sued Trump University over its business practices and more recently sued over alleged misconduct at Trump's charitable foundation, forcing him into a $2 million settlement. Meanwhile, Manhattan's district attorney filed a brief with the Supreme Court on Wednesday in his battle to get copies of Trump's tax returns as part of a criminal investigation.

Administration officials and Trump himself, however, have dismissed allegations that those personal disputes have anything to do with the administration's policy decisions regarding New York state.

One of the latest state-federal spats emerged this week over the Trump administration’s move to scuttle an Army Corps of Engineers study —inspired by the 2012 Superstorm Sandy — into whether a multi-billion-dollar sea wall could protect parts of the city and New Jersey from surging seas.

The idea of a huge wall around New York's harbor hadn't been universally loved. Trump was only one of several critics who decried it as potentially ineffective. But even some local politicians and environmental groups that had criticized the proposal decried the surprise discontinuation of the coastal resiliency study.

New York City Comptroller Scott Stringer, a Democrat, called the decision to suspend the study “reckless," and said it would expose the region "to the ravages of the next superstorm.” New Jersey Department of Environmental Protection Commissioner Catherine McCabe, also a Democrat, said she’s “deeply disappointed” that the corps’ work — including smaller resiliency projects — was suspended.

Robert Freudenberg, vice president for energy and environment at the Regional Plan Association, a nonpartisan infrastructure think tank, said the cancellation of the study is “part of a disturbing pattern.”

“Can our congressional delegations shake funds loose to continue this study?” he asked. “And if not, what can our states do?”

Trump’s budget, meanwhile, lacks funding for other infrastructure projects that New York leaders had once hoped would get easy approval with a New York native in the White House, including costly proposals to build a new train tunnel beneath the Hudson River and $3 billion in federal funding for a subway expansion project.

Those enormously costly projects might have also failed to become funding priorities in any administration, but Cuomo says he sees evidence of a vendetta.

“Because this is not just the federal government taking an isolated action that is hurting the state,” Cuomo said earlier this week after the state lost a federal health care grant worth $600 million this year. "There is a continued pattern and series of these actions. Connect the dots and you see the line.”

Days after raising hopes of a retu ...