And the rapidly spreading virus that has infected more than 81,000 people globally and left more than 2,750 dead, mostly in China, continues to threaten the Tokyo Olympics which begin July 24.

The three biggest soccer leagues in Asia have gone into recess, as the governments of China, South Korea and Japan try to contain the fallout of the rapidly spreading virus. The surge of postponements of sports events has spread from China, where the outbreak started, to South Korea and Japan. 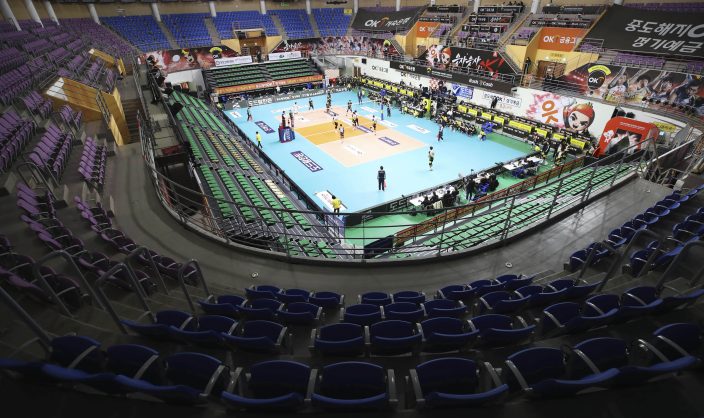 Stadium seats are empty during the pro volleyball V-league between OK Savingbank Rush&Cash and KB Insurance Stars in Ansan, South Korea, Wednesday, Feb. 26, 2020. The volleyball game held without spectators as a precaution against the COVID-19. (Hong Ki-wonYonhap via AP)

Japan's professional baseball league says it will play its 72 remaining preseason games in empty stadiums because of the threat of the spreading coronavirus. The regular season is to open on March 20.

“This was a bitter decision to make,” Commissioner Atsushi Saito was quoted as saying. “Because we can't determine the situation, I won't say anything right now about (opening day). “If possible, we all want to go ahead on March 20.”

Outside of sport, worries over the ever-expanding economic fallout of the COVID-19 crisis multiplied Thursday, with factories idled, trade routes frozen and tourism in trouble, while a growing list of nations braced for the illness to breach their borders. 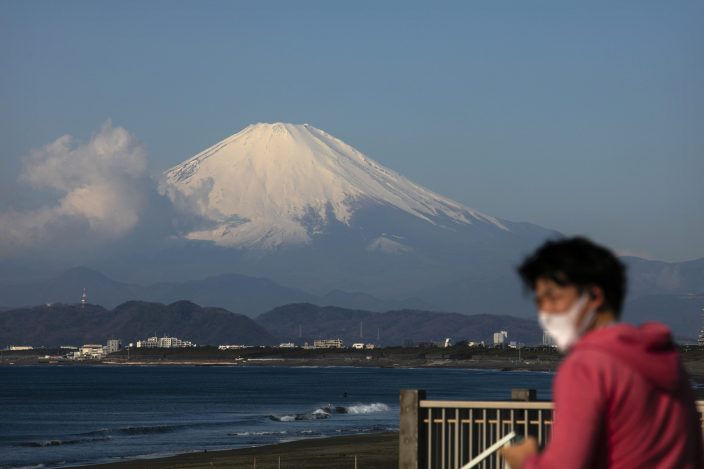 A man wearing a mask visits a beach as snow-capped Mount Fuji is visible in the distance in Fujisawa, Japan, Thursday, Feb. 27, 2020. According to local businesses in the area, the number of visitors has dropped significantly since the outbreak of COVID-19. (AP PhotoJae C. Hong)

Japan's top soccer league, the J-League, has halted all play until March 15. That announcement came less than a week after South Korean authorities postponed the start of the K-League season, which came in the wake of the suspension of the lucrative Chinese Super League. The Korean domestic basketball season will finish with matches in empty stadiums.

Continental competition has been disrupted, with Chinese clubs excluded from the start of the competitions including the Asian Football Confederation's Asian Champions League. Other countries in Asia have refused to allow Chinese teams to enter, or placed Chinese sports teams in quarantine.

On Thursday, the governing body for Super Rugby said a match between the Australia-based Brumbies and Japan's Sunwolves set for Osaka on March 6 would likely be relocated. If that wasn't possible, the teams would receive two competition points each, as they would if the match was drawn.

Other matches involving the Sunwolves, who play some of their home matches in Singapore, were likely to be affected in the the tournament that involves clubs from South Africa, New Zealand, Argentina, Australia and Japan..

The Hong Kong Sevens, the annual highlight of the rugby sevens global competition, has been pushed back to later in the year. Major events in China including the Formula One Grand Prix and the track and field world indoor championships were among the first to be postponed.

The staging of the Tokyo Olympics remain a serious threat because of the virus. On Thursday, five-time Olympic swimming gold medalist Ian Thorpe said Australia's athletes should consider their long-term health before deciding to compete in Japan in July.

“I would most definitely be concerned,” said Thorpe, who still has a profile in Japan long after retiring from competitive swimming. “What we need ...is to use some of the best expert disease specialists to find out what is the risk to the team. What is the risk to the other nations and how can we have an Olympic Games, one that is safe, that doesn't put athletes at risk?"

Thorpe’s comments come a day after International Olympic Committee veteran Dick Pound warned the Tokyo Games could be canceled due to the coronavirus.

Pound told The Associated Press that any decision on whether the Olympics can proceed could be put off until late May.

“In and around that time, I’d say folks are going to have to ask: ‘Is this under sufficient control that we can be confident about going to Tokyo or not?'” Pound said.

If the IOC decided the Games can’t go ahead as scheduled “you’re probably looking at a cancellation”, he said.

Thorpe said “the decision should come down to each individual athlete. But whether or not they want to compete, that they should take their health into consideration first.”