India accused a U.S. government commission of politicizing communal violence in New Delhi that killed at least 30 people and injured more than 200 as President Donald Trump was visiting the country.

The violent clashes between Hindu and Muslim mobs were the capital's worst communal riots in decades and saw shops, Muslim shrines and public vehicles go up in flames. Though the rioting had largely subsided, the rising toll was confirmed by hospital officials Thursday.

On Wednesday, the U.S. Commission on International Religious Freedom said it was deeply troubled by the violence and cited accounts that police had not intervened in attacks against Muslims, which police and India's federal government have denied. 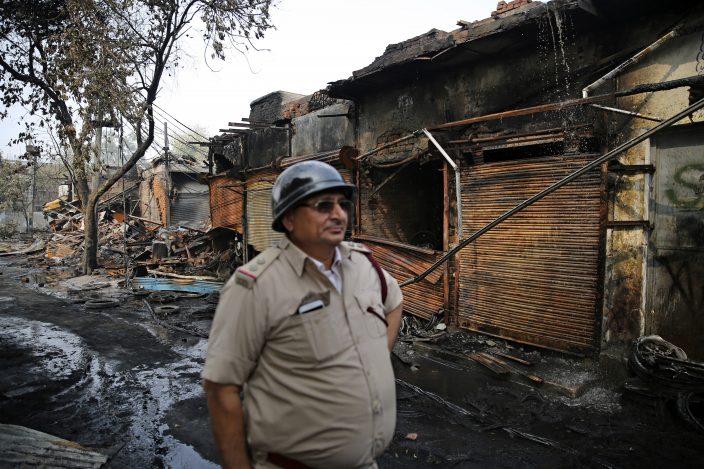 A fire fighting officer stands at the Gokul Puri tyre market which was burnt in Tuesday's violence in New Delhi, India, Wednesday, Feb. 26, 2020. At least 20 people were killed in three days of clashes in New Delhi, with the death toll expected to rise as hospitals were overflowed with dozens of injured people, authorities said Wednesday. The clashes between Hindu mobs and Muslims protesting a contentious new citizenship law that fast-tracks naturalization for foreign-born religious minorities of all major faiths in South Asia except Islam escalated Tuesday. (AP PhotoAltaf Qadri)

“The government is failing in its duty to protect its citizens,” Commissioner Anurima Bhargava said.

India’s External Affairs Ministry said the commission’s comments were “factually inaccurate and misleading” and appeared to be “aimed at politicizing the issue.”

On Thursday, burned shops and public vehicles stood charred near a highway in Chandbagh, a Muslim-dominated locality. Streets were littered with broken glass and charred petrol bombs as dozens of police in camouflage and helmets patrolled.

Muslims affected by the violence allege Hindu mobs screamed pro-Hindu slogans and rioted with impunity as the police appeared to aid the marauding crowds. Muslim rioters, too, have been violent, and a number of Hindus, including security personnel, are among the dead and injured.

Most of the violence, however, appeared to be targeting Muslims who complained that while Hindu mobs went on a rampage, the police went missing. Police have denied the allegations.

The violence began Sunday when clashes between supporters and opponents of India's new citizenship law quickly escalated into full-blown religious riots between Hindus and Muslims in working-class neighborhoods on the outskirts of the sprawling capital.

Hours before the clashes, local politician Kapil Mishra, who is affiliated with Prime Minister Narendra Modi's Bharatiya Janata Party, appeared at a rally against the citizenship law's opponents and issued an ultimatum to the police to clear out the demonstrators. He told the crowd at the rally if police wouldn't clear out the demonstrators, he and his followers would do it themselves.

Many people, including Hindus, believe Mishra and his Hindu nationalist supporters stoked the latest riots.

The law that passed in December fast-tracks naturalization for foreign-born religious minorities of all major faiths in South Asia except Islam. Nationwide protests followed, with many opponents saying the law is discriminatory and breaks from India's secular traditions.

The supporters of the law, including leaders from Modi's party, have often called the protests anti-Indians funded by Pakistan.

Trump's first state visit to India included a lavish reception in Modi's home state of Gujarat and talks with the Indian leader, but the U.S. leader said they didn't discuss the violence. Trump declined to comment about the citizenship law, saying he wanted to leave that to India, before departing.

India's riot toll rises to 46 as capital remains on edge