A former Philippine foreign secretary warned Friday that the president’s decision to end a key U.S. security pact will undermine the ability of American forces to help the country deal with major disasters and deter aggression in the disputed South China Sea.

“Other countries wanted to immediately respond but were constrained by the lack of legal arrangements for their troops to enter the Philippines,” del Rosario told a Manila forum where the repercussions of President Rodrigo Duterte’s decision to terminate the VFA were discussed. 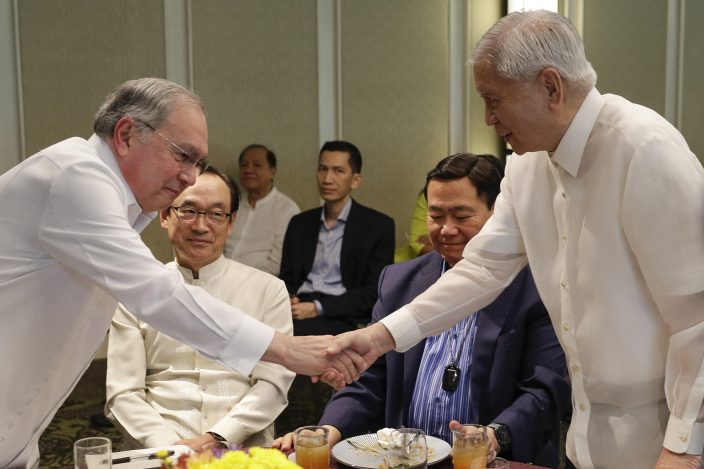 Duterte’s administration notified the U.S. government two weeks ago that it intends to abrogate the 1998 agreement, which allows the entry of large numbers of American forces for joint training with Filipino troops, including disaster-response maneuvers, and lays down the legal terms for their temporary stay. The termination will take effect after 180 days unless both sides agree to keep the agreement.

“What is unfolding before us is a national tragedy which should be resisted,” del Rosario said. “As a democratic and republican country, we do not believe that one man alone can make this damaging choice for our people.”

The move by Duterte, known for his disdain of U.S. security policies while praising China and Russia, would be a major setback for the two countries’ decades-long treaty alliance.

Haiyan was one of the most ferocious typhoons on record and left more than 7,300 people dead or missing, flattened entire villages, swept ships inland and displaced more than 5 million people.

Del Rosario, who was foreign secretary when Haiyan struck, said the U.S. government delivered 2,500 tons of relief supplies and evacuated more than 21,000 people to safety.

Duterte defended his decision Wednesday, saying the Philippines can survive and address a long-running communist insurgency and threats by Muslim extremists in the largely Roman Catholic nation’s south without American military assistance.

“Do we need America to survive as a nation?” Duterte asked. “Do we need ... the might and power of the military of the United States to fight our rebellion here and the terrorists down south and control drugs?”

“The military and police said, `Sir, we can do it,’” Duterte said.

Philippine Ambassador to Washington Jose Manuel Romualdez told the forum there are efforts to find a way to keep American special forces who provide counterterrorism training, intelligence and advice to Filipino troops in the southern Philippines.

There should be efforts to study how the VFA can be “polished” or improved using other similar status of forces agreements, including one the Philippines forged with Australia, Romualdez said.

“From what I’m told, the door is not totally shut,” he said, without elaborating. “But, again, the bottom line always falls on sovereignty and that is the reason why it is a very ticklish and a very sensitive issue for both our countries in discussing what we want to do moving forward.”

Del Rosario said the country’s alliance with Washington appears to have deterred China from undertaking reclamation and construction in Scarborough Shoal, a disputed fishing area off the northwestern Philippines that China effectively seized after a tense standoff in 2012.

China has claimed virtually the entire South China Sea, where the U.S. military presence has been seen by some rival claimants as a crucial counterweight in a busy waterway where they fear an armed conflict could erupt.

Philippines notifies US of intent to end major security pact