U.S. markets are heading for their worst week since the financial crisis with the final tally of economic damage from a spreading virus still unknown.

That doesn't mean there isn't potential promise in a select group of companies, either because their stocks have been beaten up so badly in recent days, or because their products may needed to combat the novel coronavirus.

On Friday, companies continued to issue warnings about weaker sales as the outbreak shuts down industrial centers, empties shops and restricts global travel. 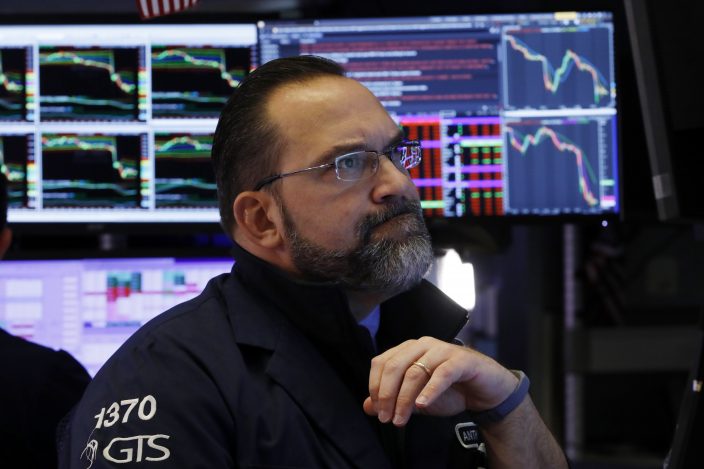 Specialist Anthony Matesic works at his post on the floor of the New York Stock Exchange, Friday, Feb. 28, 2020. Stocks are opening sharply lower on Wall Street, putting the market on track for its worst week since October 2008 during the global financial crisis. (AP PhotoRichard Drew)

Here's a look at some of the companies that steered clear of, or emerged from the fray on Friday:

Shares of vaccine maker Novavax Inc. are up more than 38% midday, while others in the sector — like Gilead Sciences and Co-Diagnostics — are experiencing pullbacks. Novavax announced earlier this week that it was starting animal testing for its vaccine candidates for the virus. Shares of Allied Healthcare Products Inc. more than doubled. The company makes respiratory health products that are in short global supply.

Perhaps no other group has been damaged more than cruise operators with a nightmare narrative emerging from the Diamond Princess, a ship that docked in Japan with 3,700 people aboard. They were all quarantined when one passenger who had disembarked tested positive for the virus. Infections spread across the ship, eventually afflicting 700 passengers and crew.

Shares of cruise operators plunged 30% or more as shipboard infections rose. It was a different story Friday, with some on Wall Street believing that the sell-off was overdone.

Another hard hit sector is computer chip makers with extensive production facilities in China. However, recognizing that the viral outbreak will end eventually, Wall Street overcame its fears and vaulted some companies out of the danger zone by reassessing fundamental performance.

Advanced Micro Devices is one of the companies with high exposure to China, but it posted solid fourth-quarter financials in its most recent quarter and has been holding its own against bigger rivals. The stock is up 2% Friday and has climbed more than 10% since the start of the year.

Nvidia Corp. is benefiting from a strong revenues and profits in the fourth quarter as well. Also, Nvidia makes graphics chips for gaming and artificial intelligence. What better way to ride out a quarantine than gaming? Its stock gained 5% midday.

Fear and chaos in global markets also created some “winners" on Friday.

The ticker “ZM” has been among the hottest ticker symbols lately. It belongs to Zoom Video Communications, a videoconferencing company that helps people work remotely. On the expectations that entire offices will be doing just that, it's shares have soared 46% in recent weeks.

Soaring on Friday was the company that owns the ticker “ZOOM." Zoom Technologies is a telecommunications company based in China that lists 10 full-time employees. It appears that Zoom Technologies is riding a wave of ticker confusion. The over-the-counter stock jumped more than 43% Friday.