Bahrain on Saturday threatened legal prosecution against travelers who came from Iran and hadn't been tested for the new coronavirus, and also barred public gatherings for two weeks as confirmed cases across the wider Mideast grew to over 520.

The tiny island nation off the coast of Saudi Arabia has been hard-hit with cases and shut down flights to halt the spread of the virus, which causes the illness named COVID-19 by experts.

All of Bahrain's cases link back to Iran, whose death toll of 34 killed is the worst outside of China, the epicenter of the virus. Iran alone has 388 cases of the virus, including top officials, and experts fear that number may be far greater, something Iranian officials themselves have begun to hint. 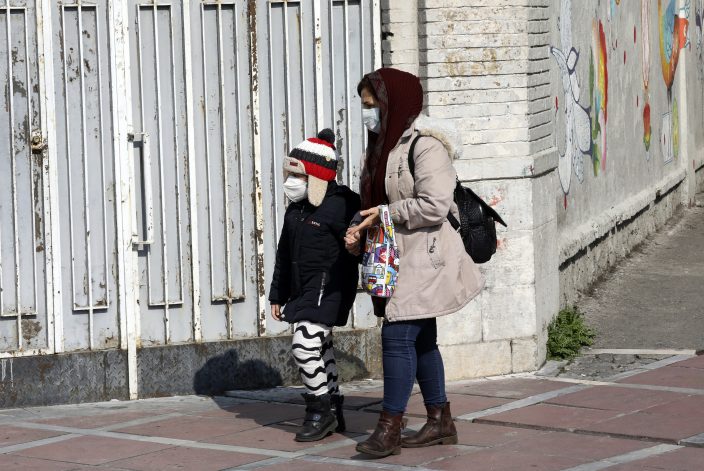 People walk as they wear masks in downtown Tehran, Iran, Thursday, Feb. 27, 2020. Amid fear and uncertainty caused by the spread of a new virus, Iranians are taking extra caution to avoid getting infected, as authorities canceled Friday prayers in Tehran, Qom and other cities. (AP PhotoVahid Salemi)

Bahrain's Interior Ministry said in a statement that 2,292 people had come to the kingdom from Iran before the announcement of the outbreak there. Of those, only “310 citizens” had called authorities and undergone testing, the ministry said, raising the possibility of the untested being arrested and charged if they refuse.

The ministry "affirmed that the required legal proceedings would be taken against anyone who returned from Iran in February and didn’t call to make appointments for the tests," the Interior Ministry said. “It highlighted that preventing the outbreak of the infection is the responsibility of individuals and society as a whole.”

Sunni-ruled Bahrain has engaged in a yearslong crackdown on all dissent in the island kingdom since its 2011 Arab Spring protests, which saw its majority Shiite population demand greater political freedoms. Militants have launched small, sporadic attacks in the time since which Bahrain security forces blame on Iran, the Mideast's Shiite power.

Meanwhile Saturday, Saudi Arabia announced it would bar citizens of the Gulf Cooperation Council from Islam's holiest sites in Mecca and Medina over concerns about the virus' spread. The GCC is a six-nation group including Bahrain, Kuwait, Oman, Qatar, Saudi Arabia and the United Arab Emirates.

Saudi Arabia on Thursday closed off the holy sites to foreign pilgrims over the coronavirus, disrupting travel for thousands of Muslims already headed to the kingdom and potentially affecting plans later this year for millions more ahead of the fasting month of Ramadan and the annual hajj pilgrimage.

It represented an unprecedented move, one which wasn’t taken even during the 1918 flu epidemic that killed tens of millions worldwide,

Iran's president says economy is a factor in virus response