President Donald Trump lobbed fresh criticism at the Democratic presidential field Monday and brushed off any concern about holding a big stadium rally as the new coronavirus spreads. He was headed for North Carolina to rev up his supporters on the eve of Super Tuesday's big round of primaries.

“I think it's very safe,” Trump said of campaign rallies, adding that the Democratic candidates are having plenty of rallies themselves.

The threat of the virus didn’t deter fans of Trump from attending Monday’s rally in Charlotte, where people in the stands shared buckets of chicken fingers and dunked their hands into shared vats of popcorn while they awaited the president's arrival. 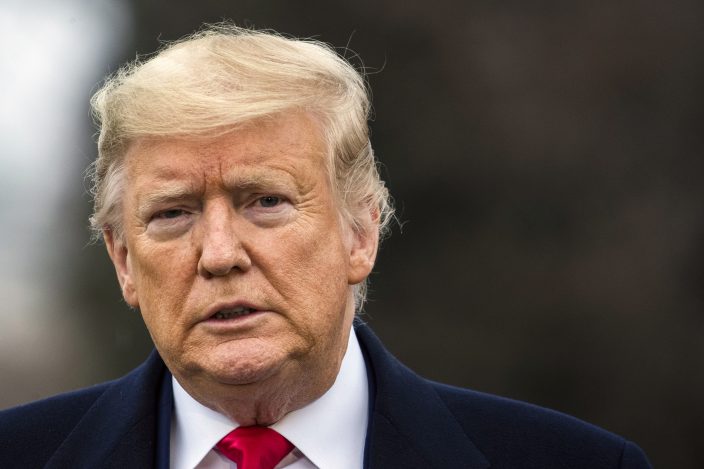 President Donald Trump talks to members of the media before leaving the White House, Monday, March 2, 2020 in Washington, to attend a campaign rally in Charlotte, N.C. (AP PhotoManuel Balce Ceneta)

The coronavirus outbreak has killed more than 3,000 globally and upended life for many around the globe. In the U.S., the number of infections has surpassed 100, with six dead.

Before leaving Washington, Trump offered reassurances about the government's response to the virus, saying “our professionals are doing, really, an incredible job.” But he had one eye clearly focused on the unsettled Democratic race to decide who will face him in November.

Trump has offered daily commentary on the Democratic race, alternately boasting that no Democrat has a chance against him, ridiculing the top tier of candidates with derisive nicknames, and arguing that the party’s establishment is trying to steal the nomination from Vermont Sen. Bernie Sanders.

North Carolina, a perennial swing state, is among the 14 states, one territory and voters abroad that will cast their ballots Tuesday, races that represent about a third of all delegates.

Trump's rally in Charlotte follows his campaign’s pattern of churning out robust counter-programming throughout the Democratic nominating process. In recent weeks, the president has held rallies in each of the four early voting states for the presidential nomination.

It’s a crucial moment in nomination battle: Former Vice President Joe Biden scored a big victory in South Carolina Saturday, and is making the case that moderates need to consolidate behind him to stop Sanders, a Democratic socialist, to give Democrats a shot at beating Trump in November.

Trump speculated there may have been a “quid pro quo" for Buttigieg — the offer of a job in the next Democratic administration for dropping out and endorsing Biden. “It's rigged against Bernie, there's no question about it,” he said.

The president and the GOP are giving North Carolina, which has been decided by close margins over the last three presidential election cycles, plenty of attention.

Republicans have picked Charlotte to host the Republican National Convention. Trump also visited Charlotte last month as part of a series of revitalization and “opportunity now” summits, programs he and administration officials have highlighted as he tries to chip away at the Democrats' electoral advantage in minority communities.

Trump erupts at campaign team as his poll numbers slide

Trump's focus on his base complicates path to reelection

Amid virus fears, Trump moves away from rallies — for now