Thousands of migrants massed on Greece’s borders with Turkey, and security forces struggling to keep them at bay. Five years on it feels like deja vu, yet the European Union seems just as ill-prepared as it was last time around.

In 2015, hundreds of thousands of people moved on Greece's land and sea borders, most fleeing from war in Syria or Iraq in search of safety in a prosperous Europe.

But this time, the Europeans say, they’ve been blackmailed by a ruthless Turkey that invaded northern Syria and because of a growing number of battlefield casualties has begun transporting thousands of desperate people, few of them Syrians, toward the EU. 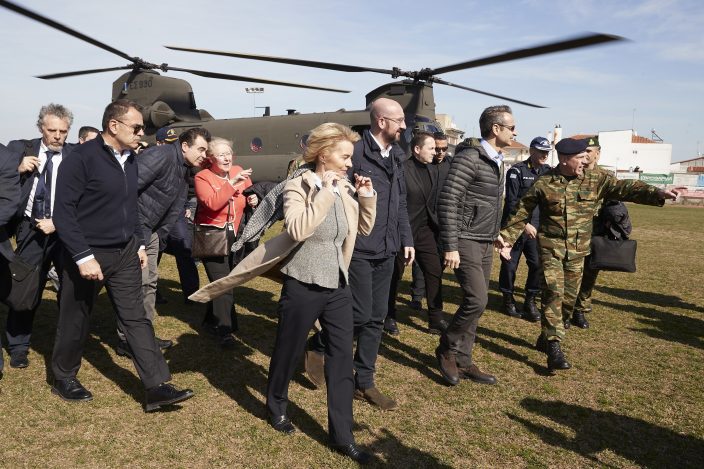 “The tens of thousands of people who tried to enter Greece in the past few days did not come from Idlib. They have been living safely in Turkey,” Greek Prime Minister Kyriakos Mitsotakis said this week. “Europe will not be blackmailed by Turkey over the refugee issue.”

As he spoke at a podium near the border zone, top EU officials stood proudly side by side, praising his country as a “shield” protecting the 27-nation bloc and upholding sacrosanct European values.

Under normal circumstances, those values would include the right for people in fear of their lives to apply for international protection and not to be pushed back from the borders. 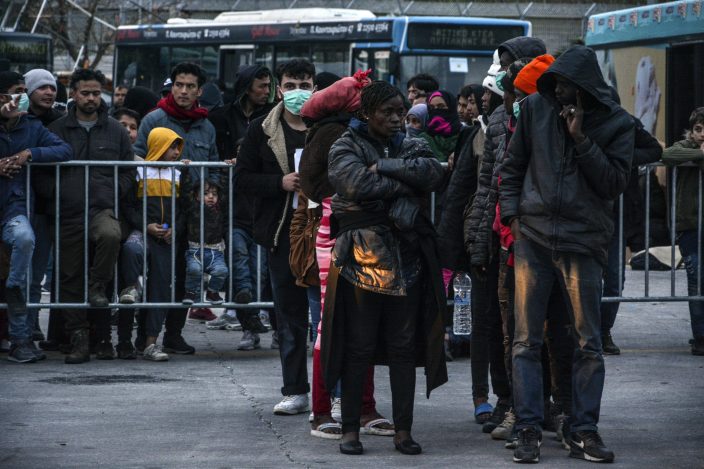 Migrants stand as others wait to enter buses at the port of Mytilene on the northeastern Aegean island of Lesbos, Greece, on Wednesday, March 4, 2020. Turkey made good on a threat to open its borders and send migrants into Europe last week. In the past few days hundreds of people have headed to Greek islands from the nearby Turkish coast in dinghies. (AP PhotoPanagiotis Balaskas)

But these are not normal times. Greek security abuses or its suspension of asylum applications - illegal under international and European law, according to the U.N.'s refugee agency - appear to have been set aside for now. These are “exceptional circumstances,” ministers and commissioners say.

While acknowledging that both Greece and Turkey need help to cope with their migrant challenges, the International Organization for Migration said Thursday that “international legal obligations must be upheld, in particular with respect to those who may be in need of international protection.”

Still, it should never have come to this. For all the EU promises about never allowing the 2015 migrant influx to happen again, it quite simply has and far too easily. In five years, the EU has failed to solve a key political riddle: who should be obliged to process and host asylum-seekers and should European partners not on the front line be forced to help? 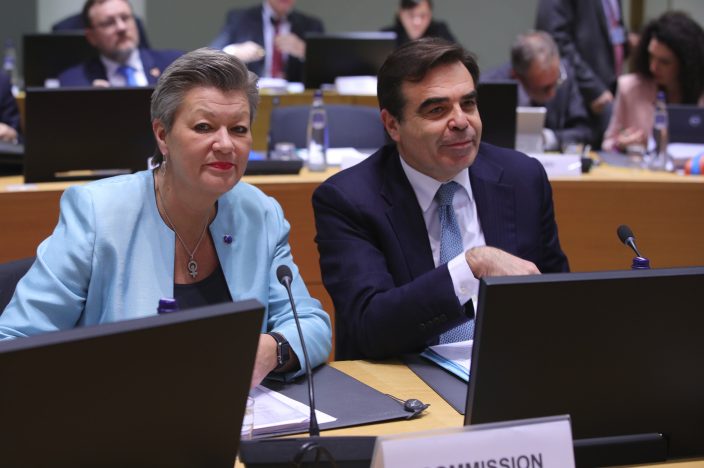 European Commissioner for Home Affairs Ylva Johansson, left, and European Commissioner for Promoting our European Way of Life Margaritas Schinas wait for the start of a meeting of EU Interior Ministers in Brussels, Wednesday, March 4, 2020. Greek authorities fired tear gas and stun grenades Wednesday morning to repulse a push by migrants to cross its land border from Turkey, as pressure continued along its frontier after Turkey said its own border with Europe was open to whoever wanted to cross. (AP PhotoOlivier Matthys)

“Europe has not been up to the task of dealing with the migration crisis. I hope this crisis will serve as a wake-up call for everyone to assume their responsibilities,” Mitsotakis said.

The 2015 migrant emergency was eminently manageable. Turkey hosts more refugees than all EU countries combined. But Greece and Italy felt abandoned by their partners; countries like Hungary that erected fences, or Austria, which turned back migrants bound for Germany or Sweden.

A quota system meant to share the refugee burden failed. 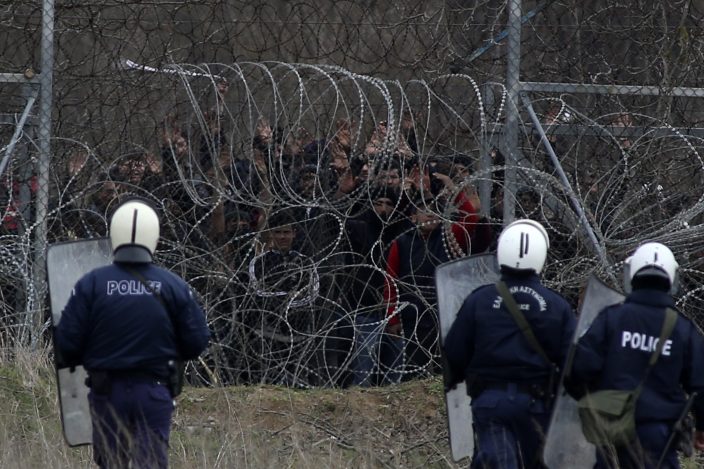 Greek riot police guard as migrants stand on a fence as they try to enter Greece from Turkey at the Greek-Turkish border in Kastanies on Wednesday, March 4, 2020. Facing a potential wave of nearly a million people fleeing fighting in northern Syria, Turkey has thrown open its borders with Greece to thousands of refugees and other migrants trying to enter Europe, and has threatened to send "millions" more. (AP PhotoGiannis Papanikos)

Since taking office late last year, European Commission migration officials have been working on a new Pact for Migration, aimed at kick-starting a vital reform of Europe’s asylum rules, which has been stalled for years.

They say the reform must be all encompassing rather than piece-meal and should involve countries that migrants leave or transit to reach Europe, as well as “robust borders and meaningful and effective solidarity” between EU nations. More people who don’t qualify to stay would be sent home.

But it’s tough to draw up effective policy in a time of crisis, when national interests make compromise difficult, and the expected unveiling of the pact has been delayed, officials at migrant agencies familiar with its aims say.

“This, I dare to say, will be our last chance. Europe cannot fail twice,” European Commission Vice President Margaritis Schinas said, underlining the importance of getting the balance right this time. The failure after 2015 sparked a backlash, with far-right and anti-migrant parties reaping the benefits at the ballot boxes.

But for this kind of policy to succeed, EU countries will rely increasingly on unpredictable allies of convenience like Turkish President Recep Tayyip Erdogan. Turkey has troops in Syria, but also in lawless Libya — another source of people trying to reach Europe — giving him great political leverage.

Erdogan wants more refugee money beyond the 6 billion euros ($6.7 billion) that the EU has agreed to provide, but he also wants European help to establish a safe area in northern Syria where people can find shelter and, ultimately, where Syrians in Turkey might be sent back.

Despite the accusations of blackmail more, not less, European help is likely.

After emergency talks Wednesday, EU interior ministers acknowledged “the increased migratory burden and risks Turkey is facing.” They affirmed support for the EU-Turkey migrant deal, saying that both sides “stand to benefit from the continuation of this cooperation and commitment.”

Aid ship with 403 migrants rescued off Libya docks in Italy