A tight, three-way fight for the men’s World Cup overall title was ensured Sunday when a super-G race was cancelled due to the weather conditions.

Just two races — and a maximum 200 points to be won — remain in an early finish to the season next weekend in Slovenia. The scheduled March 18-22 finals meeting in northern Italy was cancelled Friday due to the spreading coronavirus.

Aleksander Aamodt Kilde leaves his native Norway with a 54-point lead over Alexis Pinturault of France, and 161 over his teammate Henrik Kristoffersen. 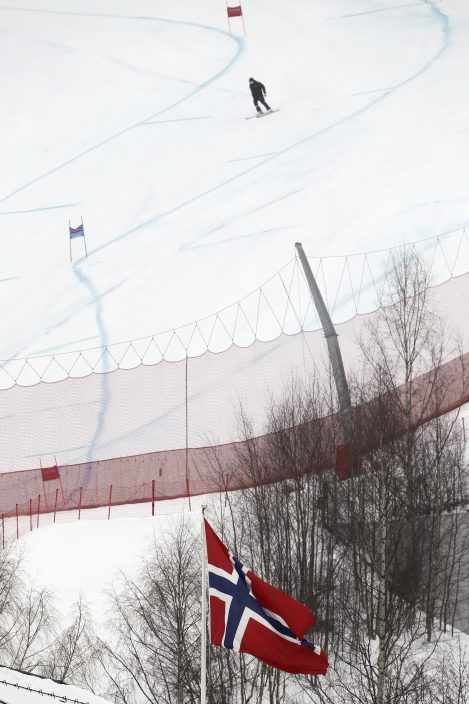 A Norwegian flag waves as a race official comes down the course after an alpine ski, men's World Cup super-G was cancelled due to bad weather, in Kvitfjell, Norway, Sunday, March 8, 2020. (AP PhotoGabriele Facciotti)

The giant slalom and slalom races in Kranjska Gora next weekend promise the closest finish since the now-retired Marcel Hirscher won the first of his eight straight overall titles in 2012.

Sunday’s cancellation in Norway handed the season-long super-G title to Mauro Caviezel, whose slender lead in the standings could not be challenged.

The 31-year-old Swiss was rewarded with his first career crystal trophy for a consistent season and top-5 finishes in all six super-G races. Caviezel stayed just three points ahead of Vincent Kriechmayr of Austria, who won two races and never finished outside the top 10.

Switzerland has completed a season sweep of trophies in the men’s and women’s speed disciplines.

Beat Feuz won his third downhill season title, and Corinne Suter got her first crystal trophies in downhill and super-G.

Kilde perhaps lost the most Sunday as a standout super-G racer who, with a high-ranking finish, could have ended Kristoffersen’s title bid. He took the lead from Pinturault by finishing runner-up in the downhill on Saturday.

Though Kilde is having a career-best season in giant slalom, he never started a World Cup slalom and likely has only one chance to score significant points in Slovenia.

Pinturault and Kristoffersen both have multiple career wins in giant slalom and slalom races.