In a whirlwind week, teachers came up with digital versions of everything from high-school English discussions to kindergarten gym classes, city officials scrambled to find laptops for students in need, and parents grappled with how they would keep kids' attention on schoolwork.

The New York City school system, the nation's largest with 1.1 million students, is taking the plunge into online education on Monday, joining districts around the U.S. in an unplanned, unprecedented test of virtual teaching during the coronavirus shutdowns.

Among the many wondering just what it will look like is Wilson Almonor, a junior who traveled an hour from his Bronx home to his Manhattan high school Thursday to try to get a loaner laptop. He left empty-handed, though he said he was told he’d get a call this week about a loaner tablet. 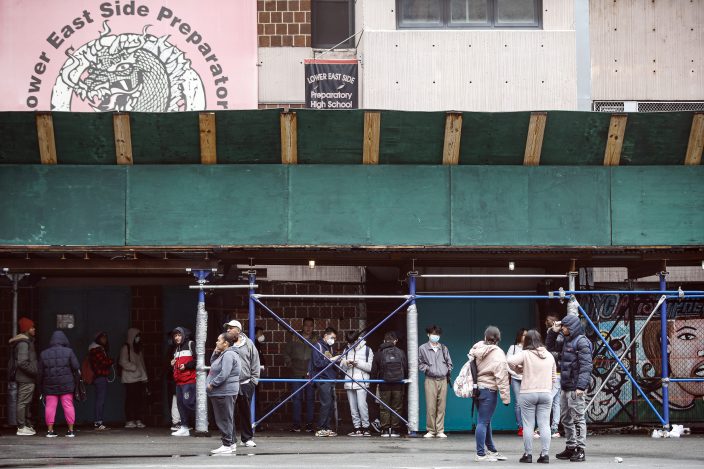 “I’m not used to online classes. I don’t know if it’s going to really help me,” said Almonor, who is concerned about keeping up with his Advanced Placement classes and staying on track to graduate, and about how he’ll ask questions of teachers in the digital cloud.

Plus, “when we are in school, we’re learning but we’re also having fun,” said Almonor, who arrived from Haiti in 2018 to join his mother, who works with the elderly.

Virtual school — sometimes known by “distance learning” or other terms — has existed for decades. But it’s far from ubiquitous in U.S. schools because of digital inequities among students, concerns about implications for teachers, and other factors. 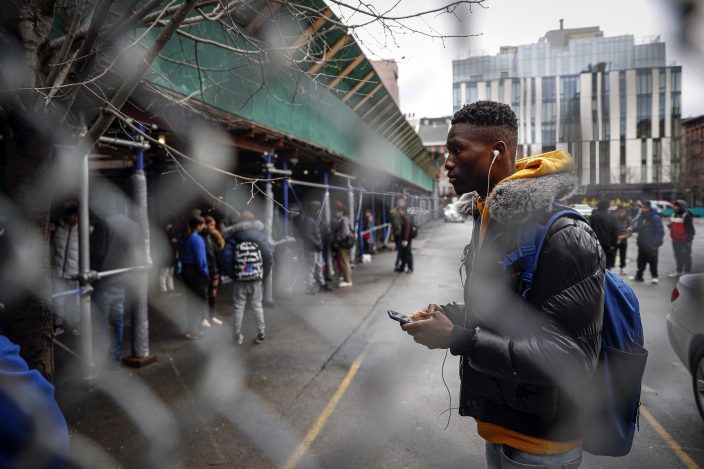 Student Laye Diakite lingers on premises after waiting to receive a school laptop for home study at the Lower East Side Preparatory School, Thursday, March 19, 2020, in New York, as coronavirus restrictions shuttered classrooms throughout the city. (AP PhotoJohn Minchillo)

Ready or not, schools everywhere are getting a crash course. In the U.S., more than 118,000 public and private schools in 45 states have closed, affecting 53 million students, according to a tally kept by Education Week.

“We're about to go into the very big unknown, but we’re excited,” New York City schools chancellor Richard Carranza said Friday. To him, it’s an opportunity to take the concept to a grand scale.

Some other experts aren’t so optimistic. They say too few U.S. educators have been trained to teach effectively online, and no one should expect too much of stopgap programs rolled out within days during a stressful time for teachers, students and families. 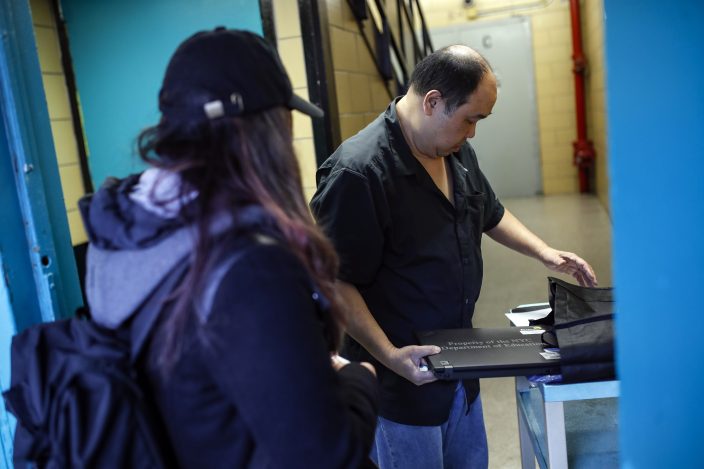 “It has the potential to be awesome, but not this way,” said Michael Young, a University of Connecticut professor who specializes in education technology.

Educators, too, acknowledge that distance learning can only go so far.

In suburban Atlanta, the Fulton County school district has sped up computer purchasing and lent Wi-Fi hotspot devices to some of its 94,000 students. Superintendent Mike Looney credits teachers with delivering inventive and rigorous online instruction. 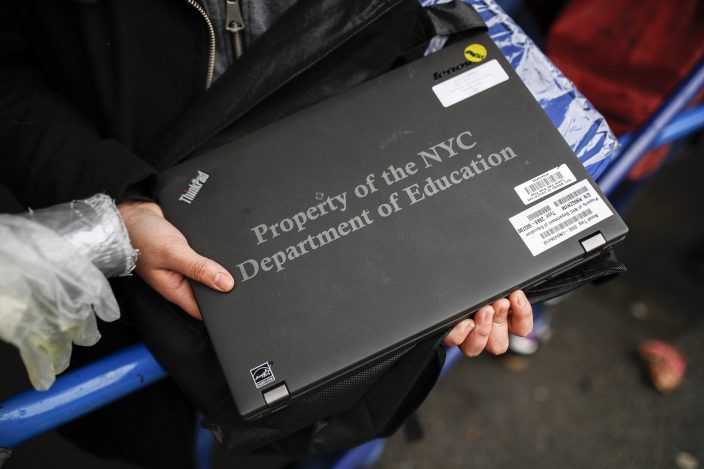 Still, “I don’t want to give anyone the false pretense that the digital learning tools are as effective as a classroom teacher,” he said.

Some school districts, including Philadelphia’s, have decided against requiring online learning during their shutdowns, saying it wouldn’t be fair to students without computers and high-speed internet at home. They're distributing packets on paper.

In New York, Carranza said the school system will start distributing 25,000 tablets Monday, while working toward getting 300,000 in all and making pencil-and-paper packets available in the meantime. Students also can work on smartphones, though their small screens aren’t ideal.

Schools and teachers have been strategizing about how best to engage their students, sharing pointers in training sessions and Facebook groups.

“It won’t be perfect. But we need to get this done,” teachers union president Michael Mulgrew said.

Jane Paul, an elementary school physical education teacher in Brooklyn, plans to post videos for students to view on their own schedules. She intends to check in with individual students regularly but thinks convening a virtual class would be unworkable for families who might be sharing devices or juggling school time with parents’ work hours.

“Everybody has to understand the challenges, and we have to make allowances for them,” Paul says.

John Bernor, on the other hand, is going to try to preserve real-time discussions among his 11th-grade English students, as he feels the interactions help clear up questions and misconceptions.

He realizes that students at his technology-focused Manhattan high school might be caring for younger siblings and sharing devices, so he’s making allowances, too. He’ll record the discussions, and he’s prepared for typos from students working on phones.

“This might not be the time when I’m harping on ‘you used the wrong ‘there,’” he said.

Broome Street Academy, a Manhattan charter high school where nearly half the students are homeless or in unstable housing, already had emphasized getting students connected for extra help online before the crisis. Eighty-five percent showed up when Broome Street started remote-only learning March 16, said Eric Weingarten, CEO of The Door, the social services group that runs the school.

But he worries that students may miss out on legal, mental health, medical and other help that are normally right down the hall but now virtual at The Door, now shut until at least March 30.

“We have these built-in supports, and now those aren’t as easy to provide,” he said.

Parents, too, are having a distance learning experience — carving out space for their own work and their kids’, trying to keep small ones engaged through a school day, making sudden peace with screen time.

With second- and third-grade sons, Dr. Steven Radowitz isn’t sure how effective online education can be for their age group. “I really don’t want them in front of a screen, but I guess we do the best we can,” the Manhattan primary care physician said.

Andrea Francis and her 11-year-old son, Ayden, are ready to go. She’s not working because of medical problems and didn’t have a computer, but his Manhattan school loaned them one Thursday, and he was itching to get on it for his math club’s webinar.

But with school out at least through April 20 and middle school starting next year, Ayden doesn’t want to miss out on the school dance, his fifth-grade “senior trip” and everything else that goes with being in school in person.

“I’m not going to be with my friends,” he mused. “And I’ll miss my school and learning, even though we’re still getting work.”

Associated Press journalists John Minchillo and Karen Matthews in New York and Jeff Amy in Atlanta contributed to this report.

The Associated Press receives support for health and science coverage from the Howard Hughes Medical Institute’s Department of Science Education. The AP is solely responsible for all content.

Some US schools are pulling the plug on distance learning