A fixture on television, actress Julie Bowen of “Modern Family” is doing the same thing as millions of other people during the widespread coronavirus shutdown.

She's sitting at home, watching more television than she normally would.

In a world turned upside down by disease, TV viewership is growing. It's a rare bit of good news for an industry that has steadily shrunk, and its executives hope to seize an opportunity by anticipating what a stressed audience wants to see. 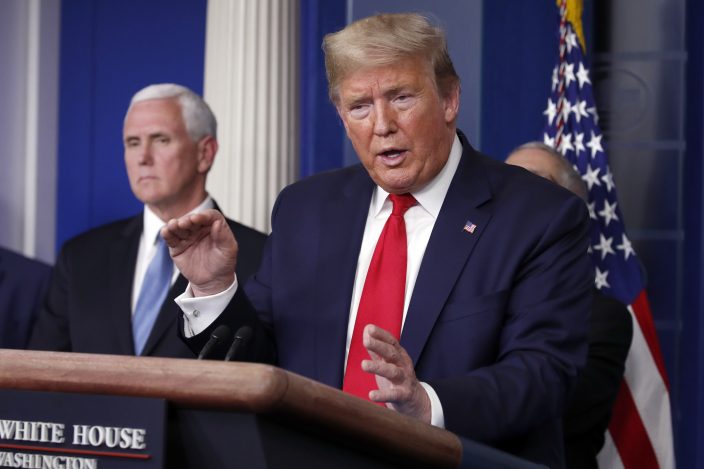 Bowen and her children binged on the NBC comedy, “Brooklyn Nine-Nine.”

“I'd never seen it and it's super fun,” she said. “I'm trying really hard to stay away from anything grim or reality-based right now. I don't want any heavy drama. Can't do it.”

Television usage last week was up 8% over what it was in February, according to the Nielsen company. That may not seem like much, but this is the time of year when that statistic usually goes in the opposite direction: with Daylight Savings Time and moderating weather, more people spend time outside and away from the TV. 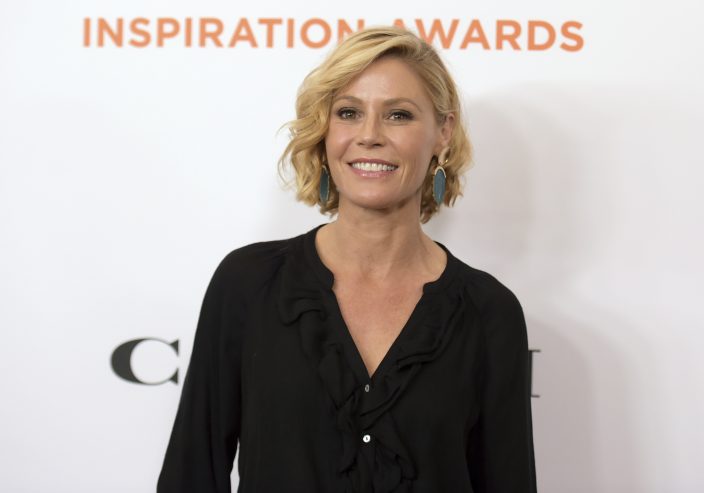 FILE - This June 1, 2018 file photo shows Julie Bowen at the Inspiration Awards benefiting Step Up in Beverly Hills, Calif. In a world turned upside down by disease, TV viewership is growing. It's a rare bit of good news for an industry that has steadily shrunk, and its executives hope to seize an opportunity by anticipating what a stressed audience wants to see. Bowen of “Modern Family” and her children binged on the NBC comedy, “Brooklyn Nine-Nine.” (Photo by Richard ShotwellInvisionAP, File)

Not surprisingly, news programming is the biggest beneficiary.

In fact, if you're looking for breakout coronavirus TV stars, consider David Muir of ABC's “World News Tonight" or Lester Holt of NBC's ”Nightly News." Both broadcasts had larger audiences last week than anything shown in the prime-time hours.

Twenty years ago the network evening news was considered on the brink of extinction. But more than 32 million people tuned into these broadcasts, along with the “CBS Evening News with Norah O'Donnell,” each night for a rundown of the day's top developments. 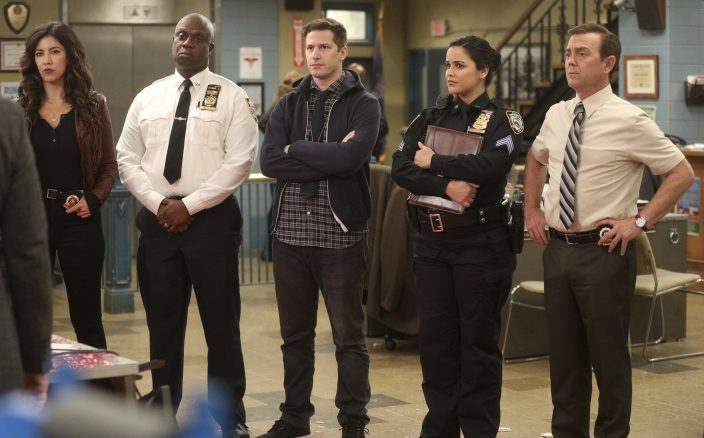 This image released by NBC shows the cast of the comedy series "Brooklyn Nine-Nine," from left, Stephanie Beatriz, Andre Braugher, Andy Samberg, Melissa Fumero and Joe Lo Truglio. In a world turned upside down by disease, TV viewership is growing. Actress Julie Bowen of “Modern Family” said she and her children binged on the NBC comedy, “Brooklyn Nine-Nine.”(Jordin AlthausNBC via AP)

Other programs that reported, or talked, about the news hit milestones last week. CBS' “Sunday Morning” had its biggest audience last weekend since 1994, and “Face the Nation” since 1991. ABC's “The View” had its most-watched week since January 2019. Same for NBC's “Today” show.

The original TV star-turned-politician, President Donald Trump, is on cable television nearly every day with news conferences, and reached 4.4 million viewers for a Fox News town hall on Tuesday. The impact of that exposure will be seen in November. 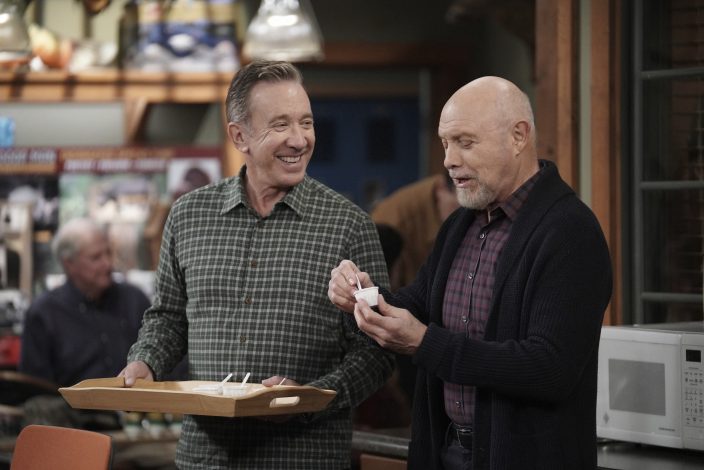 This image released by Fox shows Tim Allen, left, and Hector Elizondo in a scene from the comedy series "Last Man Standing," that aired on Thursday, March 19. With millions of people stuck at home due to the coronavirus outbreak, television viewership is on the rise. Broadcast networks see their 8 p.m. shows doing well in part, they suspect, because many are being shown after expanded local news. Fox's “Last Man Standing” last week, for example, was up 50 percent in live viewing, Nielsen said. (Michael BeckerFox via AP)

“I've started laughing at his little jokes,” wrote Rebecca Fishbein on Jezebel. “I catch myself touching my hair (not my face!) when he talks about an increase in testing capacity. I swooned when he told a reporter he had his own workout routine ... I think I have a crush???”

Anayo Michel, who owns a dance studio in Valley Stream, New York, credits her incessant watching of CNN's Dr. Sanjay Gupta for a decision to ask some of her instructors — before most people realized how disruptive the outbreak would be — to videotape classroom instruction.

You can only take so many medical updates, however. Bernadette Scully, who's retired, said her husband drives her nuts by keeping Fox News on all day at the cottage in Cranberry Lake, New Jersey, where they are self-quarantining.

“It makes me stressed because you hear it all the time,” she said. “My husband says, ‘don’t listen to it.' But you can't not listen to it.”

The news is seeping into prime time entertainment in an unexpected way. Broadcast networks see their 8 p.m. shows doing well in part, they suspect, because many are being shown after expanded local news. Fox's “Last Man Standing” last week, for example, was up 50% in live viewing, Nielsen said.

Otherwise, programmers are waiting to see what these captive viewers want to watch.

“We're dealing with what everybody in the country is dealing with right now,” said Nancy Daniels, who runs the Discovery Channel, Science Channel and Animal Planet, “which is what will tomorrow bring? What will next week bring? Or next month?”

Daniels said the Discovery-owned networks have shifted daytime lineups to run marathons of some of their most popular shows, reasoning that shut-ins would appreciate the familiarity. On HGTV, that means multiple episodes of “Property Brothers” and “Love it or List it.”

“We want viewers to feel like they're hanging out with friends,” said Jane Latman, HGTV president.

Fox feels it has an obligation and opportunity to give people a respite from the news with escapist and hopefully positive fare such as “The Masked Singer,” said Dan Harrison, Fox Entertainment executive vice president for program planning and content strategy.

“We are all assuming that people would be flocking to see whatever they consider ‘comfort food’ when it comes to programming right now,” said Jeff Bader, NBC president of program planning, strategy and research. “For some people that would be comedy, but for other people it could be old movies or reality shows. One of my colleagues likes horror movies to escape reality.”

So far, “Blacklist” is NBC's biggest coronavirus-era winner. Even a long-running success got a boost: CBS' “NCIS” drew about 13 million viewers on Tuesday, its biggest audience in more than a year and a 22% increase over the previous new episode, on March 10.

Bowen's “Modern Family” may benefit. The multiple-Emmy-winning ABC comedy signs off after 11 seasons on April 8. The network also hopes to gather families with a David Blaine magic special, while CBS will air a James Corden prime-time special.

HBO's streaming service just had its best week since last summer, as viewers have sought favorites like “Big Little Lies” and “Westworld,” and oldies like “Sex and the City” and “The Sopranos," said Cheryl Idell, WarnerMedia's top researcher.

Showtime, sensing an opening, is offering a free 30-day trial to non-subscribers.

Between March 3 and 14, Tivo reported a 600% increase in viewing of pandemic-themed fare, like “12 Monkeys,” “Contagion” and “Outbreak.” The most-requested item on Cinemax's on-demand platform over the past two weeks has been “Contagion.”

Not everyone is willing to push the pandemic button, however. NBC announced Wednesday that it was yanking an episode of “New Amsterdam” about a flu epidemic in New York City that had been scheduled to run April 7.

Closed schools have been a lifeline for networks aimed at young people, which for years have been hard hit by parents who prefer on-demand viewing or try to limit screen time. Daytime viewing of children's programming was up 31% last week over the same week a year ago, said the research firm Comscore.

Lisel Doreste-Hamilton, a teacher in Port Orange, Florida, said she just subscribed to Disney programming for her daughter, Celia.

“She's been watching two Marvel movies a day,” she said.

Even with all the people stuck at home, CBS had fewer viewers in prime time than the same week a year ago. The cancellation of March Madness is the likely culprit.

Then there's ESPN, left without the chief pillar of its business — live sports programming, and no idea when it will return. It is scrambling to fill the time, importing professional wrestling, airing again its award-winning documentary, “OJ: Made in America,” and negotiating with leagues to rerun old games and events. There's been a lot of talk about NFL free agency and the upcoming draft.

Then, of course, there was ESPN's coverage of the Cherry Pit Spitting Championship from Eau Claire, Michigan.