There must be no government restrictions on mass gatherings or travel restrictions throughout the U.S. and Canada, provided the commissioner will consider "appropriate substitute neutral sites where economically feasible." The commissioner must determine, after consulting with the union and medical experts, "that it does not pose an unreasonable health and safety risk to players, staff or spectators to stage games in front of fans in each of the 30 clubs’ home ballparks." MLB and the union will discuss the economic feasibility of playing games at neutral sites or without fans. The commissioner has the right to suspend or cancel games after the start of the season if government restrictions or travel conditions change. 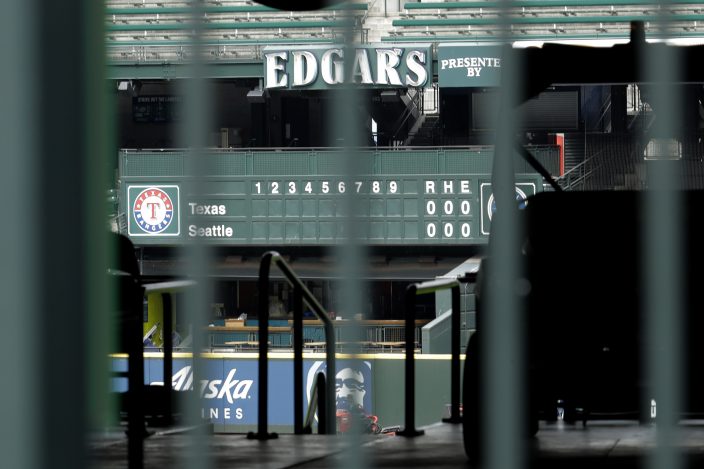 The manual scoreboard at T-Mobile Park in Seattle is seen through the bars of an entry gate, Thursday, March 26, 2020, on the day that would have been the Mariners' Opening Day baseball game against the visiting Texas Rangers. Earlier in the month, Major League Baseball called off the start of the season due to the outbreak of the new coronavirus. (AP PhotoTed S. Warren)

The sides will discuss "the possibility of playing a reasonable number of regular season games beyond the initially scheduled end of the regular season" and “reasonable changes to the roster rules to protect the health and safety of players at the beginning of the season.” Initial discussions are to end by April 10. MLB will propose a schedule "using best efforts to play as many games as possible, while taking into account player safety and health, rescheduling needs, competitive considerations, stadium availability, and the economic feasibility of various alternatives."

Discussions shall include "one-time changes to the structure, format, qualification rules" and "potential ways to expand the postseason beyond its current format."

Each player signed to a major league contract at the start of the season shall have his salary determined by multiplying his full-season salary by the number of games scheduled (not adjusting for weather-related postponements or cancellations) divided by 162, minus any advanced salary. In the event of an additional interruption or delay, the salary shall be determined by multiplying his full-season salary by the games played by the player's club divided by 162. Thresholds and amounts for bonuses, escalators and vesting options would be reduced by using the same formula. A player previously at spring training who is unable to report because of travel restrictions or visa issues would be placed on the restricted list and receive up to 30 days of salary.

Each team shall contribute $94,444.44 per day for 60 days, a total of $170 million, either from March 26 through May 24 or until the start of the season, whichever is earlier, to allocate among players on the 40-man roster, 60-day injured list and those with major league contracts on outright assignments to the minor leagues. The payments will be made in equal installments on the normal payroll schedule. A player with a split contract (different salaries in the minor leagues and major leagues) receives $275 daily if his salary while in the minors is $46,000 to $91,799, $500 daily if $91,800 to $149,999 and $1,000 daily if $150,000 or more. The remainder of the $170 million will be split among the rest of the players with major league contracts who want advances; each player has the right to opt out. Amounts will be reimbursed through payroll reductions.

Teams will pay players' travel costs for leaving and returning to spring training.

If there is no season, the union would be reimbursed for up to $2 million of any spring training allowances advanced to players from March 13-26, using international signing bonus pool taxes and/or the industry growth fund.

Any payment due from April through June for signing bonuses, deferred compensation and termination pay may be delayed to no later than Sept. 1, but with interest at the rate specified in the collective bargaining agreement.

If games are played, a player would receive service equal to days in the major leagues multiplied by 186 (days in the original season's schedule), divided by the number of days in the revised schedule after excluding interruptions in play. A full service year remains 172 days.

The union waives claims to additional salary or service time.

Trades, waivers, injured list placements, designations for assignment and releases are frozen. Optional assignments to the minor leagues and assignments of players to be named will be frozen at noon EDT Saturday. Retention bonus decisions and opt outs will be reset to five days prior to the revised opening day. No trade discussions among clubs or contract discussions among clubs, players and agents are permitted until spring training resumes. Teams have the right to release minor league players not represented by the union. The sides will discuss changes to offseason deadlines.

MLB has the right to delay the dates of the 2020 and 2021 drafts to as late as July 20 and the signing deadline to as late as Aug. 1. MLB may reduce rounds from 40 to 5 in 2020 and to 20 in 2021. Signing bonuses may be paid at up to $100,000 within 30 days of approval by the commissioner office and 50% of the remainder due on July 1 in each of the following two years. Signing bonus slot values will remain frozen at 2019 levels, Bonuses for undrafted players are capped at $20,000. Competitive balance round picks may not be traded. If fewer than 81 regular-season games are played by any team this year, MLB may modify the 2021 draft order.

For 2020-21 and 2021-22, MLB has the right to delay the international amateur free agent signing period to Jan. 15 through Dec. 15 from its usual July 2 through June 15. Signing bonus pool amounts will remain frozen at 2019-20 levels. Teams may not trade signing bonus pool allotment.

Thresholds will remain the same. The amount of tax owed by a club shall be determined by multiplying the amount by the number of games played and divided by 162. If no games are played, no tax is owed.

The amount for 2020 will remain the average of the contracts of the 125 highest-paid players with no adjustments for reduced amounts paid in salaries and bonuses due to a shortened season.

If no games are played, players non-tendered after the 2019 season who did not sign contracts with provisions for 2021 would become free agents again on a date to be agreed to by MLB and the union.

Existing suspensions with 80 games or fewer remaining to be served may not be carried over into 2021.

Extended for all players with major and minor league contracts, under either the major league or minor league health care plans.

The union will not challenge decisions by MLB to not enforce its debt service rule in 2020 and 2021.

A player shall return home unless it is impracticable or unsafe, or he requires medical care that can be provided only at a team facility.

Minimum amounts for the 2020 postseason player pool are eliminated. If the format is changed, the parties will negotiate the adjustments.

Players agree to reasonably cooperate through the 2020 postseason on MLB and team promotional efforts.

Japan advocate for daughter, others abducted to NKorea ...