Celtics coach Brad Stevens can only remember leaving his home on a few occasions over the past two weeks.

It is part of the new status quo for coaches and players across the NBA since the coronavirus pandemic sparked a rolling shutdown of professional sports across the globe. The league suspended its season March 11 after Utah Jazz All-Star Rudy Gobert became its first player to test positive for the COVID-19 strain.

It has left the 42-year-old coach, like everyone else, searching for ways to adjust to a new reality and daily routine. 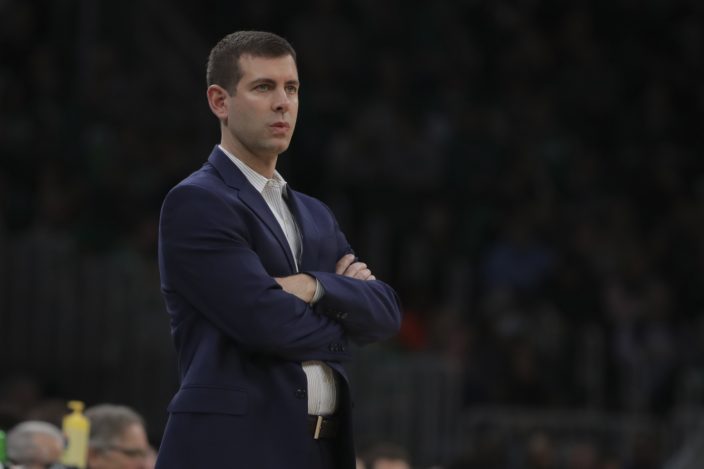 Boston Celtics head coach Brad Stevens watches his players during the first half of an NBA basketball game against the San Antonio Spurs, Wednesday, Jan. 8, 2020 in Boston. (AP PhotoCharles Krupa)

The new coronavirus has caused a global pandemic that has sickened at least 597,000 and killed more than 27,000 worldwide, crippled economies and forced restrictions on the movement of millions of people in an effort to stop the virus from spreading further and overwhelming health care systems.

The NBA has lost 100 games so far with no clear timeline for when the season might resume — if at all.

Stevens said he's passing the time the same way many are across the country.

“I try and do everything that we're asked to do,” he said. “We get out and we go for walks. ... But, my thoughts are with everybody who's really facing this thing. And, it's just that you feel so bad.”

Stevens spends his days trying to stay connected to both his family and Celtics’ family the best he can.

He and his wife, Tracy, put together a PowerPoint presentation for his 14-year-old son and 10-year-old daughter to help explain the scope of the pandemic both in New England and worldwide.

He’s also been hopping on video conference calls with his players and coaching staff, though he said they’ve been light on basketball and heavy on just making sure everyone is staying safe.

“We're like the rest of the world, you know that basketball is taking a far back seat,” he said.

Stevens said the day Gobert’s positive test became public “will be something that I think we all remember.”

As a precaution, Celtics players and staff were also tested, but those tests all came back negative. Stevens said Smart is also doing well.

“Obviously the days following that we enter this kind of new world,” Stevens said. “We're calling sitting at home an inconvenience. What a joke like this is. There's so many people that are working so hard every day to try to help our communities and help the secure putting their own selves at risk. And, I think any time you turn on the TV, it hits home more.”

While Stevens doesn’t think it would be appropriate right now “to be hammering basketball” with his players, they are getting some work done during their downtime.

All of the players have received exercise bikes and a personal set of weights they can use to do voluntary home workouts. Stevens is also getting some of the postseason film study he normally wouldn’t complete until after the season done now.

“It helps us dial in to what we need to do should we be able to resume playing and what we need to focus on when we get back to practice,” he said. “It would be a unique situation to be off for as long as we're gonna be off to have the re-acclimate and recondition. But you do already have a system in with those 15 guys.”

For now, Stevens said he’s just concentrating on keeping busy rather than trying to predict when he might be able to dive back into basketball full-time.

“I think there's a lot to determine,” he said. “And I think you can't determine any of that until you have a timeline. And it's just almost impossible to get a timeline right now."