China has sent a plane loaded with medical personnel and supplies to aid Pakistan in the fight against the spread of the coronavirus in one of the world's most populous nations, the Pakistani foreign ministry said Saturday.

Across the Middle East, the outbreak has raised concerns that health systems strapped by multiple wars, refugee crises and unstable economies won't be able to handle a growing numbers in cases. Iran is battling the worst outbreak in the region. Iranian state TV raised Saturday that the virus death toll by another 139 people, pushing the total fatalities to 2,517 amid 35,408 confirmed cases.

China has sought to portray itself as a global leader in the fight against the outbreak, which began a few months ago in its Wuhan province. The plane carrying aid to Pakistan was expected to arrive later Saturday. 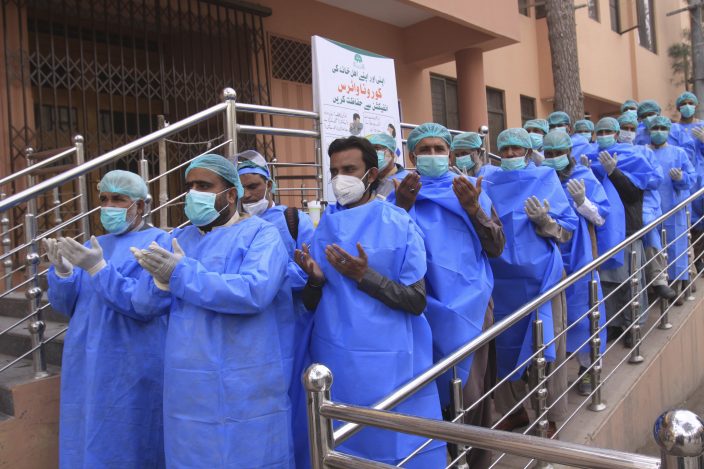 Hospital staff pray before joining their shift, outside a hospital setup for coronavirus infected patients in Quetta, Pakistan, Thursday, March 26, 2020. The virus causes mild or moderate symptoms for most people, but for some, especially older adults and people with existing health problems, it can cause more severe illness or death. (AP PhotoArshad Butt)

Pakistan is a key link in China's ambitious multi-billion-dollar One Road Project linking south and central Asia with China. China is also a key military supplier for nuclear-armed Pakistan, having supplied the country with missiles capable of carrying atomic weapons.

Pakistan, with a population of 220 million, currently has 1,321 confirmed cases of the virus, including 10 deaths from the illness it causes, COVID-19. Most of the infected people there were travelers returning from neighboring Iran.

Most people infected by the virus only experience mild symptoms, such as fever and cough, and recover within a few weeks. But the virus can cause severe illness and death, particularly in older patients or those with underlying health problems. 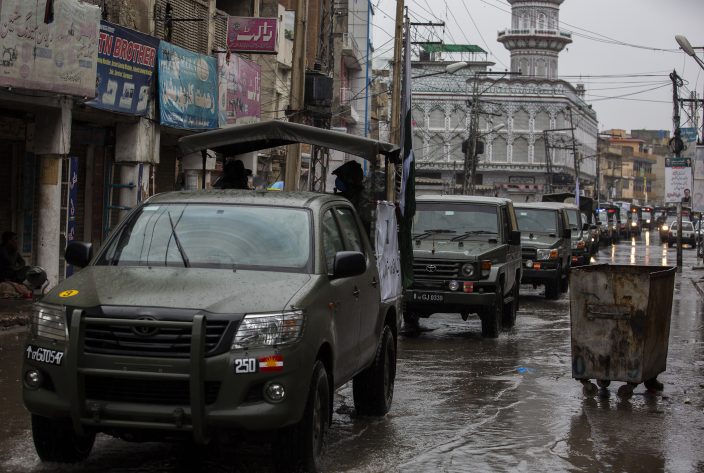 Pakistani soldiers patrol outside a mosque in Rawalpindi, Pakistan, Friday, March 27, 2020. Authorities imposed nation-wide lockdown appealed people to avoid public gatherings like Friday congregations and offer their prayers at home as a preventive measures to contain the spread of coronavirus. The virus causes mild or moderate symptoms for most people, but for some, especially older adults and people with existing health problems, it can cause more severe illness or death. (AP PhotoB.K. Bangash)

Pakistan has closed its borders with both Iran and Afghanistan, but has come under widespread criticism for its initial lax response to the virus.

Even as the pandemic spread to the country, Pakistani authorities allowed tens of thousands of Islamic clerics from around the world to congregate for three days outside the eastern city of Lahore. Some 200 of the clerics are now quarantined at the site of the gathering, a sprawling compound belonging to an Islamic missionaries group, Tableeghi Jamaat.

Many of the visiting clerics at the conference returned to their home countries, some of them carrying the coronavirus. The first two reported cases in the Gaza Strip attended the three-day gathering in Pakistan, and are now under quarantine in Gaza. Other linked cases have emerged elsewhere in the Middle East and Central Asia. 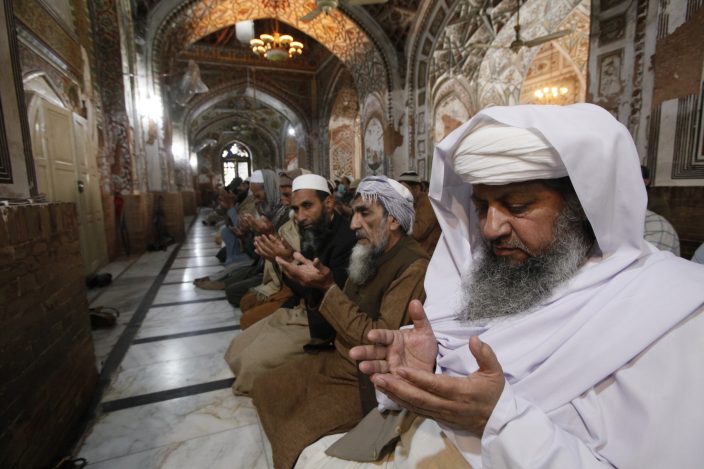 Pakistani worshippers attend a Friday prayers in Peshawar, Pakistan, Friday, March 27, 2020. Authorities imposed nation-wide lockdown and appealed to people to avoid public gatherings as a preventive measure to contain the spread of coronavirus. The virus causes mild or moderate symptoms for most people, but for some, especially older adults and people with existing health problems, it can cause more severe illness or death.(AP PhotoMuhammad Sajjad)

As of Saturday, the government still had not ordered mosques closed nationwide, instead relying on recommendations to worshippers not to gather for weekly Friday prayers. Pakistani officials are reluctant to defy local hardcore Islamic leaders, who can whip up mobs to protest any perceived insults to religion. Some of these clerics have even taken to social media urging the faithful to fill the mosques, saying it is their religious obligation.

The southern Sindh province has imposed a wider lockdown, but without closing mosques. In the eastern Punjab province, only groceries and pharmacies are open.

In Iran, officials have repeatedly insisted they have the outbreak under control despite concerns it could overwhelm the country's health facilities.

Iran's government has faced widespread criticism for not acting faster to contain the virus. Only in recent days have authorities ordered nonessential businesses to close and banned travel between cities — long after other nations in the region imposed sweeping lockdowns.

Authorities in Gaza, which has been under an Israeli and Egyptian blockade since the Hamas militant group seized power there in 2007, have reported nine cases.

Gaza's health care infrastructure has been severely eroded by years of conflict and isolation. A major outbreak in the territory, which is home to more than 2 million Palestinians, could be extremely difficult to contain.

Another major areas of concern is Yemen, where the rebel Houthis have been at war with a Saudi-led coalition for five years. The war has killed more than 100,000 people, displaced millions more and driven the Arab world's poorest country to the brink of famine.

Sudan’s Health Ministry reported two more confirmed cases, bringing the total cases to five, including one death. Both of the new cases were Sudanese travellers returning from abroad last week, one coming from France, and another from the United Arab Emirates.

Sudan has been rocked by over a year of political turmoil and protests that were triggered by a plunging economy.

With Italy at risk, Europe Central Bank could boost sti ...

The European Central Bank could so ...

Will open seats be familiar sight in sports as virus fa ...

Empty seats have been the norm the ...

Lebanon to reinstate total lockdown amid spike in infections

Saudi Arabia triples taxes, cuts $26B in costs amid pandemic