More than a fifth of Detroit's police force is quarantined; two officers have died from coronavirus and at least 39 have tested positive, including the chief of police.

For the 2,200-person department, that has meant officers working doubles and swapping between units to fill patrols. And everyone has their temperature checked before they start work.

An increasing number of police departments around the country are watching their ranks get sick as the number of coronavirus cases explodes across the U.S. The growing tally raises questions about how laws can and should be enforced during the pandemic, and about how departments will hold up as the virus spreads among those whose work puts them at increased risk of infection. 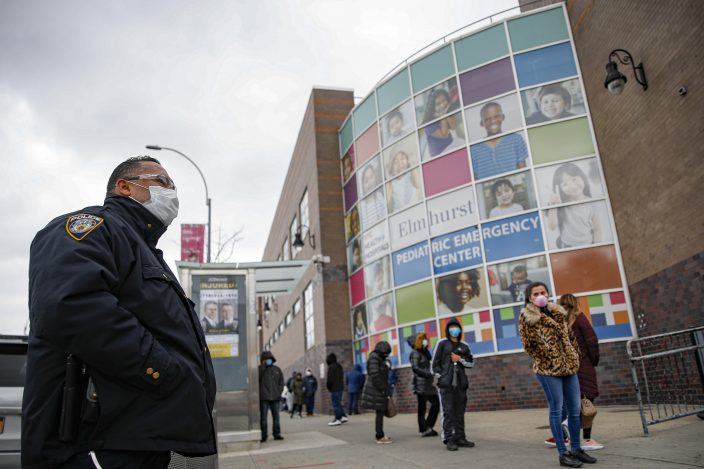 An NYPD officer wears personal protective equipment while maintaining order along a line to enter COVID-19 testing site at Elmhurst Hospital Center, Wednesday, March 25, 2020, in New York. Police have stepped up efforts to pressure New Yorkers to practice social distancing at the epicenter of the crisis. It's part of a global challenge that law enforcement and health officials say is critical to containing the coronavirus. (AP PhotoJohn Minchillo)

“I don’t think it’s too far to say that officers are scared out there,” said Sgt. Manny Ramirez, president of Fort Worth Police Officers Association.

Nearly 690 officers and civilian employees at police departments and sheriff’s offices around the country have tested positive for COVID-19, according to an Associated Press survey this week of over 40 law enforcement agencies, mostly in major cities. The number of those in isolation as they await test results is far higher in many places.

Anticipating shortages, police academies are accelerating coursework to provide reinforcements. Masks, gloves and huge volumes of hand sanitizer have been distributed. Roll call and staff meetings are happening outside, over the phone or online. Precinct offices, squad cars and equipment get deep cleaned in keeping with Centers for Disease Control and Prevention guidance. 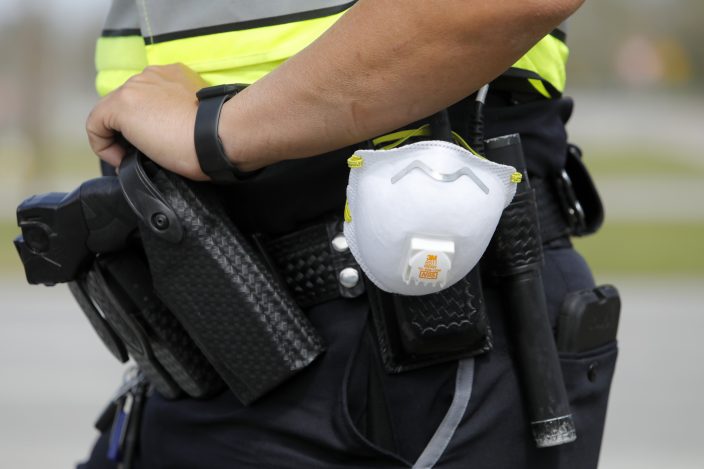 Yet, many are worried it's not enough. This week, groups representing American police and fire chiefs, sheriffs, mayors and county leaders asked President Donald Trump in a letter to use the Korean War-era Defense Production Act to ensure they have enough protective gear.

“We’re in war footing against an invisible enemy and we are on the verge of running out" of protective supplies, said Houston Police Chief Art Acevedo, president of the Major Cities Chiefs Association. “We’ve got hospitals calling police departments, police departments calling each other, and it’s time to nationalize in terms of our response.”

Police are accustomed to meeting staffing crunches by canceling vacations and leave, putting officers on 12-hour on, 12-hour off schedules and, when necessary, by shifting detectives and other specialized personnel to patrol. 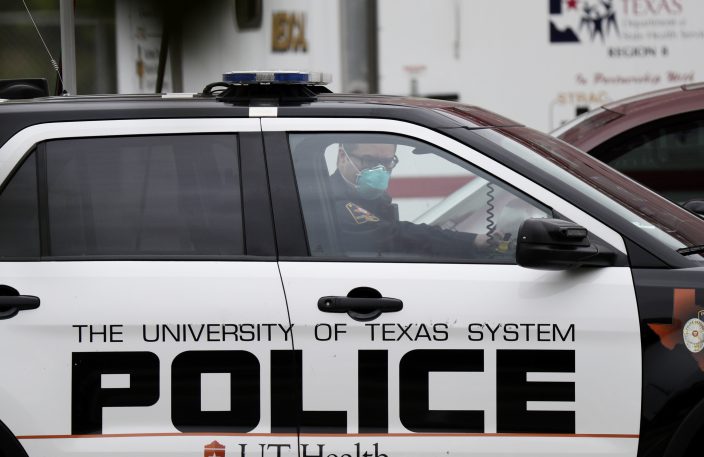 A police officer wears a mask as he speaks to a man at the check point for a coronavirus drive-thru test facility, Monday, March 16, 2020, in San Antonio. According to the World Health Organization, most people recover in about two to six weeks, depending on the severity of the illness. (AP PhotoEric Gay)

And officers are used to risk. It's part of the job. But at a time when Americans are being advised to stay six feet from each other to combat an insidious virus that can live on surfaces for days, the perils and anxieties are new.

This crisis is unlike any American police forces have dealt with before, said former Boston Police Commissioner Ed Davis.

“We're in unprecedented territory here,” said Davis, who led the police department when the Boston Marathon bombing happened in 2013. 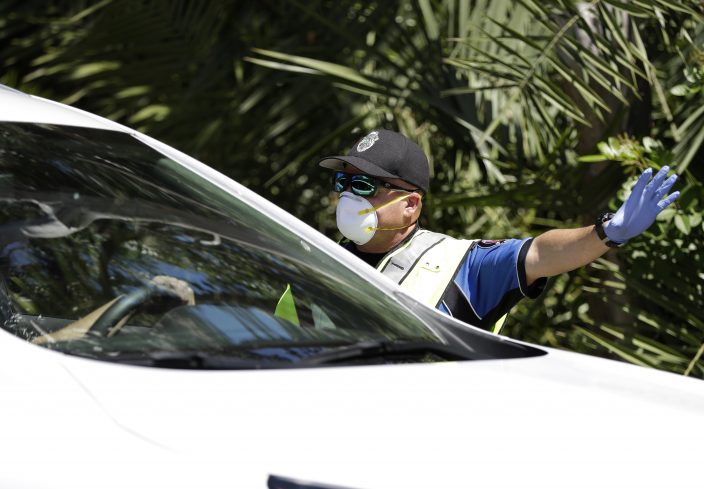 Police check cars and pedestrians at a checkpoint at the entrance to the Village of Key Biscayne, Fla., Monday, March 23, 2020. The village issued an emergency order, banning all travel, starting Monday, within the village by non-residents, with a few exceptions. (AP PhotoWilfredo Lee)

Streets are less crowded as people hunker in their homes. But police must prepare for the possibility of civil unrest among people who become anxious or unhappy about government orders or hospitals that get overrun with patients, he said.

In New York, which has rapidly become the American epicenter of the pandemic, more than 500 NYPD personnel have come down with COVID-19, including 442 officers, and the department's head of counter-terrorism was hospitalized with symptoms. Two NYPD employees have died. On a single day this week, Friday, 4,111 uniformed officers called in sick, more than 10% of the force and more than three times the daily average.

Leadership at America’s largest police department maintains that it’s continuing enforcement as usual. But they’ve also said that if the disease continues to affect manpower the NYPD could switch patrol hours, or pull officers from specialized units and other parts of the city to fill gaps -- steps also taken after the Sept. 11, 2001, terrorist attacks.

But the U.S. is now leading the world in the number of confirmed cases; more than 100,000. Over 1,700 people have died in the country. And doctors say cases are nowhere near peaking.

“They need to have ways so that if one person goes down, who’s going to back that person up, so departments are having to be innovative,” he said.

In big cities and remote areas alike, officers are being told to issue tickets or summons rather than making arrests for minor crimes. More crime reports are being taken by phone or online. These steps to limit exposure come as police must beef up patrols in shuttered business districts and manage spikes in domestic violence.

In Detroit, officials say many of those quarantined should return to duty soon. In the meantime, an assistant chief recently released from quarantine is heading up day-to-day operations while Chief James Craig is out.

Many officers are also worried about whether they'll be able to draw workers compensation benefits if they get sick, since the coronavirus is not spelled out in the list of covered conditions.

“No one really knows,” said Robert Jenkins, president of the Florida State Lodge of the Fraternal Order of Police union, which covers 22,000 officers. “Unfortunately, we have to be out there. We don’t have a choice.”

While the pandemic has so far hit American cities hardest, rural law enforcement agencies with few staff are in some ways most vulnerable.

In the tiny West Texas community of Marfa, Police Chief Estevan Marquez instructed his four officers not to pull over cars for minor traffic infractions, especially if they're passing through from areas already hit by the virus.

He can't afford for anyone to get sick.

Risks complicate reopenings as WHO warns 1st wave not o ...

The risks of reigniting coronaviru ...