In tiny Munfordville, Kentucky, the closure of the public library has cut people off from a computer used only for filling out census forms online. In Minneapolis, a concert promoting the once-a-decade count is now virtual. In Orlando, Florida, advocates called off knocking on doors in a neighborhood filled with new residents from Puerto Rico.

Across the U.S., the coronavirus has waylaid efforts to get as many people as possible to participate in the count, which determines how much federal money goes to communities. The outbreak and subsequent orders by states and cities to stay home and avoid other people came just as the census ramped up for most Americans two weeks ago.

Thousands of advocates, officials and others who spent years planning for the U.S. government's largest peacetime mobilization are scrambling to come up with contingency plans for pulling it off amid a pandemic. 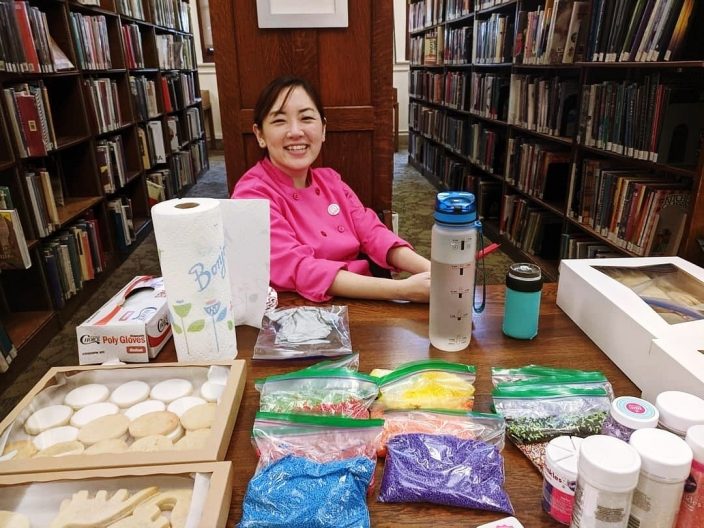 In this Oct. 29, 2019, photo, provided by Itha Cao, Jasmine Cho sits with all her cookie decorating supplies at a census awareness event at the Carnegie Library in Pittsburgh. The coronavirus has waylaid efforts to get as many people as possible to take part in the census. Pittsburgh had commissioned Cho, who uses cookie decorating to highlight Asian American and social justice issues, to lead decorating workshops with a census theme. An October session drew almost 50 people and grabbed attention, but workshops planned for March and April were canceled. (Courtesy of Jasmine Cho via AP)

“Right now, everybody is faced with figuring out how to outreach to our communities not being face to face,” said Jennifer Chau, leader of a coalition of Asian American, Native Hawaiian and Pacific Islander organizations in Phoenix that passed out 300 reusable boba tea cartons in January to anyone who signed a card pledging to complete their census form.

Nonprofits and civic organizations leading census outreach efforts are pivoting to digital strategies. Texting campaigns, webinars, social media and phone calls are replacing door-knocking, rallies and face-to-face conversations. But it comes at a cost: Experts say connecting with trusted community leaders in person is the best way to reach people in hard-to-count groups that may be wary of the federal government.

"It's making it exponentially more difficult to get the kind of accurate count that is needed for this census. There's no sugarcoating it. It's really tough," said Arturo Vargas, CEO of NALEO Educational Fund, a Latino advocacy group. “Thank goodness for technology. We wouldn't be able to do what we're doing without it.” 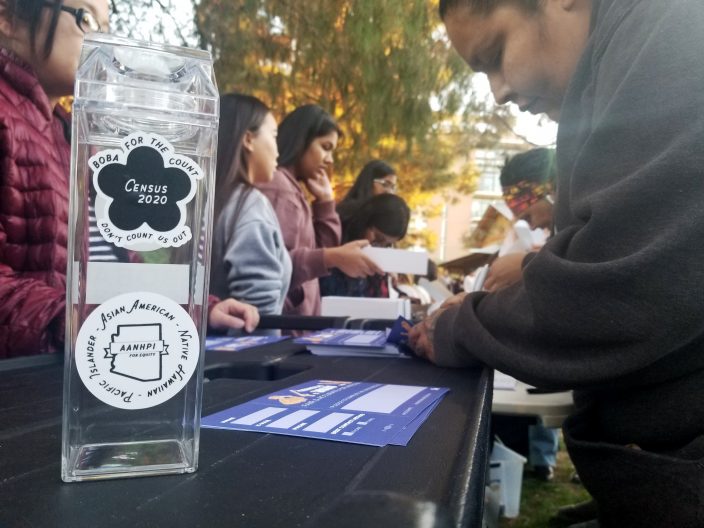 In this Jan. 3, 2020, photo, a woman fills out a pledge card for the U.S. Census in exchange for a reusable boba tea carton at a boba drink competition in Phoenix. The coronavirus has waylaid efforts to get as many people as possible to take part in the census. (AP PhotoTerry Tang)

Although the U.S. Census Bureau is spending $500 million on outreach efforts, including advertising, it's relying on more than 300,000 nonprofits, businesses, local governments and civic groups to encourage participation in their communities.

The groups are recalibrating their messaging to address the upheaval in people's lives, including job losses and stay-at-home orders, and to focus on how census numbers help determine the distribution of federal aid or medical supplies their communities may get during the coronavirus crisis. The groups also are emphasizing that if people answer the questionnaire online, by phone or by mail now, they can avoid having a census taker sent to their house to ask them questions come late spring and summer.

“We want people to understand that even though we have this health emergency going on, there's a connection to the census with how the distribution of funds to states is all going to rest on how many people there are in a community,” Minnesota's demographer Susan Brower said. 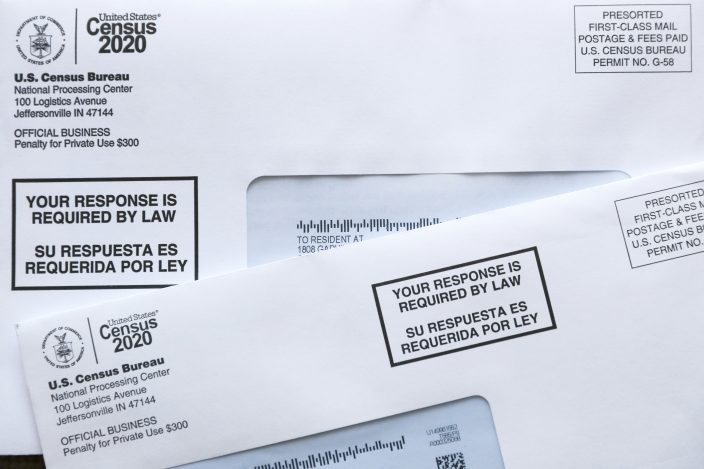 In this Tuesday, March 24, 2020 photo, forms from the U.S. Census Bureau arrive at a home in Orlando, Fla. The coronavirus has waylaid efforts to get as many people as possible to take part in the census. (AP PhotoJohn Raoux)

The 2020 census will help determine how many congressional seats and Electoral College votes each state gets, as well as the distribution of some $1.5 trillion in federal spending.

The coronavirus has forced the U.S. Census Bureau to delay the start of tallies of homeless people and other transient populations such as racetrack workers, college students, prisoners and nursing home residents. It has pushed back the deadline for wrapping up the count by two weeks, to mid-August.

“Of all of our worst nightmares of things that could have gone wrong with the census, we did not anticipate this set of actions," said Al Fontenot of the Census Bureau. “But our staff has been extremely resilient about looking for solutions." 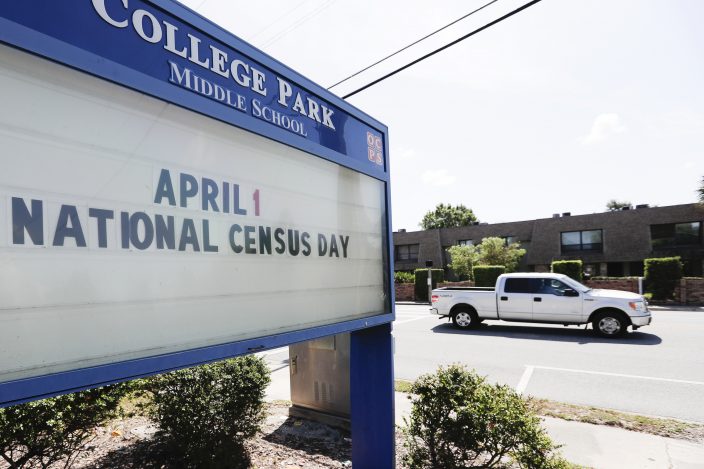 In this Tuesday, March 24, 2020 photo, a sign at a middle school in Orlando, Fla., reminds residents that April First is census day. The coronavirus has waylaid efforts to get as many people as possible to take part in the census. (AP PhotoJohn Raoux)

On the plus side, more people at home now have time to answer the questionnaire, and the deadline extension offers chances to reach out to more people, Brower said.

In some places, outreach done well before the virus spread in the U.S. is paying off, but organizers aren't sure it will last. For the first week that people could start answering the 2020 questionnaire, New York City — which had dedicated $40 million to outreach efforts — was well ahead of its 2010 pace of self-responses. But now it's the epicenter of the U.S. outbreak.

The coronavirus causes mild or moderate symptoms for most people, including fever and cough that clear up in two to three weeks. For others, especially older adults and people with existing health problems, it can cause more severe illness, including pneumonia and death.

More than 30% of U.S. residents already had answered the census questionnaire as of Friday. Most of the temporary census takers hired by the government won't be sent out until May to knock on the doors of homes where people haven't yet responded.

"We are trending much better than 10 years ago, even in this craziness," said Sheena Wright, president and CEO of United Way of New York City.

That's despite events meant to generate participation getting canceled or delayed.

Pittsburgh had commissioned Jasmine Cho, who uses cookie decorating to highlight Asian American and social justice issues, to lead decorating workshops with a census theme. An October session drew almost 50 people and grabbed attention, but workshops planned for March and April were canceled.

“I'm hopeful that under the current quarantine measures, that people will actually pay more attention to their census mailings and take the time to complete it,” Cho said.

The self-described “cookie activist” and the city are in talks to make an online instructional video about census-themed cookie decorating.

San Francisco was supposed to ring in Census Day on April 1 with one of its famous cable cars rolling through iconic neighborhoods, but that became a casualty of COVID-19. Money from a $3.5 million budget earmarked for food and venues for census form-filling parties and town halls in the Bay Area will now go toward video marketing and printed materials, according to Stephanie Kim of the United Way Bay Area.

“It's been hard to have to pivot on all the activities and events they were planning for for a long time,” Kim said. “So many organizations had planned for big community get-togethers.”

Atlanta is home to 2 potential contenders for Biden ...

Neither public rivals nor personal ...

Congress is at a crossroads in the ...