The world changed remarkably this past week — yet again, just as it did the week before, as the coronavirus marched across the world. No corner of the planet was safe, it seemed: If the virus itself wasn't upending lives, it was the isolation that spread as the world locked down or the economic repercussions of the fight.

Associated Press journalists across the planet chronicled it. This guide to some of their words and images is a diary of a world at once on pause and in the middle of the biggest fight of its generation.

More than perhaps anyone, front-line medical professionals are seeing the virus' effects up close — and taking the biggest risks. This series of portraits from Italy, showing some of them up close, puts faces with the facts. And in Iran, another hard-hit area, belief in a false treatment that was poisonous killed hundreds. 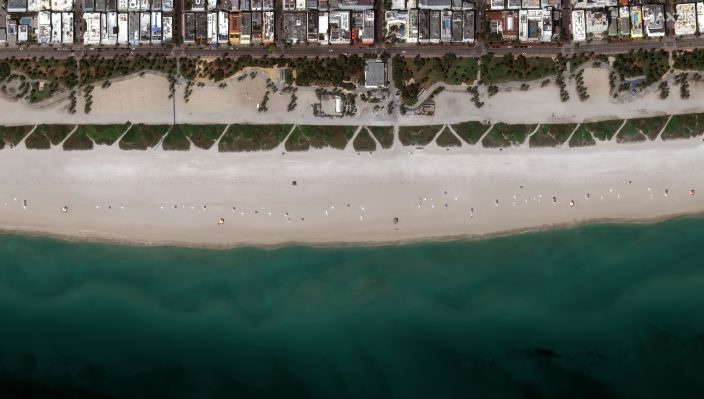 This Friday, March 27, 2020, satellite image provided by Maxar Technologies shows an empty area in Miami Beach, Fla. amid an outbreak of the new coronavirus. The new coronavirus causes mild or moderate symptoms for most people, but for some, especially older adults and people with existing health problems, it can cause more severe illness or death. (Satellite image ©2020 Maxar Technologies via AP)

New York City became a terrifying epicenter of the virus in the past week as a “cacophony of coughing” overran emergency rooms and health care workers worried they might be next. And as more was asked of Americans, an important question emerged: Are they ready for a once-in-a-generation kind of sacrifice?

In addition to covering breaking news, the AP is focusing on several overall areas in its coverage. Here's a look at some of the most significant work from those areas over the past week.

HEALTH AND SCIENCE: THE VIRUS, AND FIGHTING IT 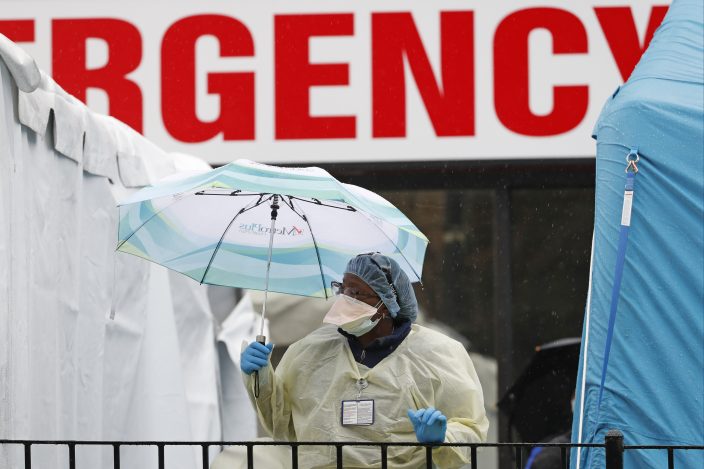 A medical worker holds an umbrella as she checks to to see if anyone is waiting in line outside a COVID-19 testing center at Elmhurst Hospital Center in New York, Saturday, March 28, 2020. The hospital is caring for a high number of coronavirus patients. (AP PhotoKathy Willens)

Scientists are scrambling to find ways to protect people from the coronavirus including collecting the blood of recovered patients to harvest the antibodies they’ve already produced to fight the virus. The excitement about treating the new virus with a malaria drug now used against lupus and rheumatoid arthritis along with an antibiotic is raising hopes, but the evidence that it works is thin.

With capacity also stretched thin, U.S. hospitals are rushing to find beds for a coming flood of patients, opening older closed hospitals and repurposing other medical buildings. And in the world's most densely populated cities, how do you practice social distancing?

The distancing rules are affecting U.S. seniors in nuanced ways. Some are resilient and say the coronavirus crisis reminds them of World War II rationing and past disease epidemics. Others are isolated and lonely in senior homes that have imposed visitor bans. Those struggling with mental illness and substance abuse face challenges, too, from a pandemic that requires distancing and isolation. 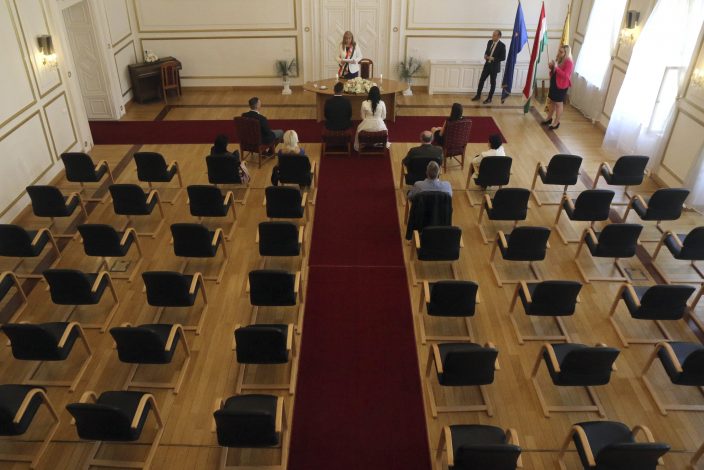 Groom Gyorgy David Jablonovszky and his bride Timea Jablonovszky attend their wedding ceremony along with their family members at the town hall of Miskolc, Hungary, Saturday, March 28, 2020. The couple celebrate today without wedding guests because of the government regulations to prevent the COVID-19 coronavirus pandemic. The new coronavirus causes mild or moderate symptoms for most people, but for some, especially older adults and people with existing health problems, it can cause more severe illness or death. (Janos VajdaMTI via AP)

And in Europe, political leaders are hailing a potential breakthrough in the fight against COVID-19: simple pin-prick blood tests or nasal swabs that can determine within minutes if someone has, or previously had, the virus. The tests could reveal the true extent of the outbreak, but some scientists have challenged their accuracy.

The effects of the pandemic reverberated through the world economy. Businesses shut down, millions of people lost jobs, and governments scrambled to put together aid packages. Feel like you had whiplash? You’re not alone. Never before have economies screeched to such a sudden, violent stop. 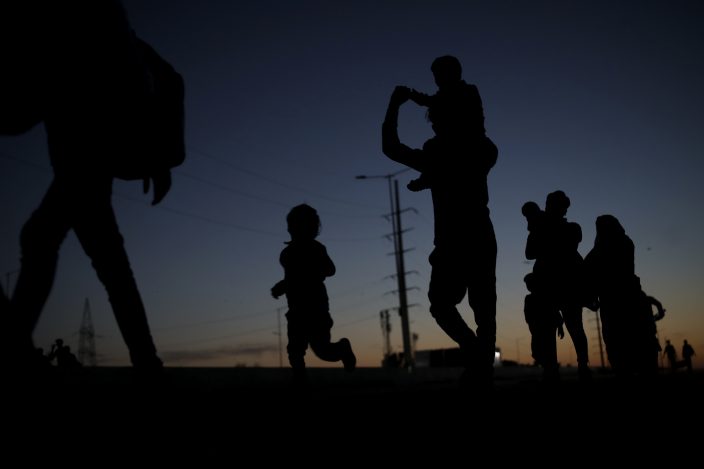 An Indian migrant laborer's family is silhouetted as they make the journey to their village by foot, following a lockdown amid concern over spread of coronavirus in New Delhi, India, Saturday, March 28, 2020. Authorities sent a fleet of buses to the outskirts of India's capital on Saturday to meet an exodus of migrant workers desperately trying to reach their home villages during the world's largest coronavirus lockdown. Thousands of people, mostly young male day laborers but also families, fled their New Delhi homes after Prime Minister Narendra Modi announced a 21-day lockdown that began on Wednesday and effectively put millions of Indians who live off daily earnings out of work. (AP PhotoAltaf Qadri)

Some economists see a downturn that could rival the Great Depression. The U.S. reported astronomical unemployment figures, quadrupling the previous record for claims, set in 1982. Congress passed a $2.2 trillion emergency relief package, which led to examinations of the ways that might help people stay afloat and answers about the one-time checks for most Americans and enhanced unemployment benefits included in the package.

President Donald Trump vowed that the U.S. economy would be open for business by mid-April, but experts warned that it’s not as easy as flipping a switch.

In Europe, the crisis is already challenging farmers, with closed borders preventing seasonal workers from showing up to harvest crops. And in Wuhan, China, the epicenter of the outbreak, we started to get a sense of how things might look when restrictions ease, with millions of people heading back to work as authorities began lifting the last of the controls that confined them to their home.

In places just starting lockdowns, people whose jobs could continue came to terms with the realities of working from home, admiring each others’ kitchen cabinets on video conference calls and dealing with interruptions from kids and pets. And in a bit of brighter news, volunteers around the world banded together to sew masks for hospital workers facing shortages of protective equipment.

GOVERNMENTS: ARE THEY ACCOUNTABLE?

Questions of accountability are at the core of the coronavirus saga. Who is doing what, and are they doing right? Are abuses of power taking place? Where can — and should — nations, government and businesses do better to protect people?

From Washington, a $2 trillion legislative package to shore up the economy was carefully written to prevent President Donald Trump and his family from profiting from the fund. But the fine print reveals that businesses owned by Trump and his family still may be eligible for some assistance.

The nation's governors are trying to get what they need from Washington, and fast. But that means navigating the disorienting politics of dealing with Trump, an unpredictable president with a love for cable news and a penchant for retribution.

The Pentagon was racing to shield vital missions even as it faced urgent calls for help on the civilian front. And for prisons around the United States, plagued for years by violence, misconduct and staffing shortages, the coronavirus pandemic throws gasoline on the fire. The Federal Bureau of Prisons has a scattershot policy on COVID-19 safety, and both advocates and even prison guards are calling for quick reform.

The world is getting used to a new normal of curfews, economic devastation and deep travel restrictions. For the people of Gaza, Sarajevo, Lebanon and other places that have known war and siege, this is all too familiar. Recalling life under siege in Kashmir, one man remembers: “It helped us to rediscover the family and social talk."

Overlooked people and communities everywhere are struggling with the new coronavirus. There are the Americans who’ve had their water shut off in an age when hand washing could save your life, and the smaller communities that are dealing with the crisis. Two families in San Francisco, one rich and one poor, face very different struggles as they navigate this frightening time. In this view from rural America, we meet people and communities filled with fear that, despite the natural social distancing there, the pandemic is coming.

And in Europe, the mostly deserted streets of virus-riddled Spain are still populated with homeless people, as documented in a sobering photo essay.

THE RIPPLE EFFECT: SOCIETY AND CULTURE

As the virus spreads, life changes — for right now and, maybe in some cases, for the long term as well.

People stuck at home changed entire family configurations, leading to some couples trying to figure out new challenges — and some partners and children becoming potentially more vulnerable to abuse.

Other families drew closer, some by taking walks in their neighborhood, as seen in this profile of a Virginia community. More restaurant- and takeout-focused diners turned to — or turned back to — cooking. And laughter, long a go-to expression in tough times, was bursting forth in unusual, virus-specific ways.

In Lebanon, COVID-19 managed to do what a string of wars could not: shut down nightlife. In France, where going out for the morning baguette is an irrepressible part of life, the push to isolate was creating new conversations about it.

And an American milestone, baseball's opening day, passed without a single crack of a bat in ballparks that were empty and desolate.

AP’s new daily series “One Good Thing” is designed to tell stories about the kindness of strangers and those individuals around the world who sacrifice for others during the outbreak.

That means a sailmaker in Maine making masks and university veterinary departments loaning ventilators to ill-equipped hospitals. And in Berlin, “United We Stream” was dreamed up as a way to keep the moribund nightlife financially healthy while entertaining a quarantined city.

GROUND GAME: INSIDE THE OUTBREAK

The PGA Tour now has a dedicated p ...