Roger Penske, at 83 and considered high risk for the coronavirus as a 2017 kidney transplant recipient, still makes the daily three-minute commute to his Bloomfield Hills, Michigan, office.

He works 12 or more hours a day from his conference room at Penske Corp., which has a skeleton crew practicing social distancing. Penske has 60,000 employees across the world in an organization in constant flux because of the COVID-19 crisis.

That would be enough for the leader of any corporation, but this pandemic is marring his debut as owner of Indianapolis Motor Speedway and the IndyCar Series. His cloak-and-dagger purchase was done in six weeks last year, the sale completed in January, and the most important thing to Penske since taking over was gearing up for his first chance to host “The Greatest Spectacle in Racing.” 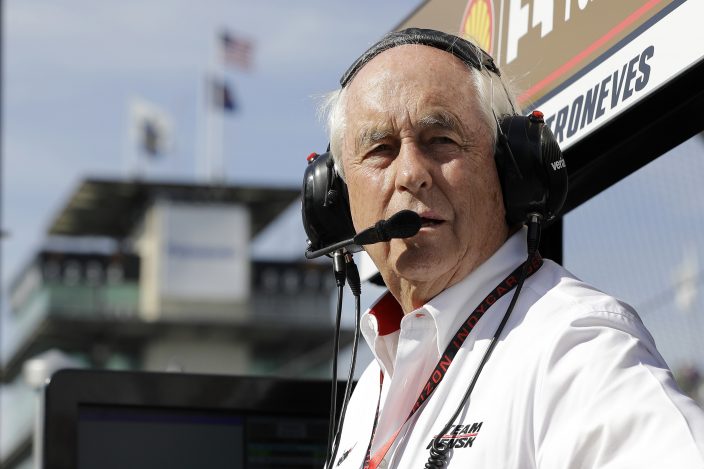 FILE - In this May 16, 2017, file photo, car owner Roger Penske watches practice for the Indianapolis 500 auto race at Indianapolis Motor Speedway, in Indianapolis. Penske, at 83 and considered high risk to the coronavirus as a 2017 kidney transplant recipient, still makes the daily three-minute commute to his Bloomfield Hills, Mich, office. He works 12 or more hours a day from his conference room at Penske Corp., which has a skeleton crew all practicing social distancing. Penske also had the small matter of planning his first Indianapolis 500. (AP PhotoDarron Cummings, File)

The Indianapolis 500 won’t be run on Memorial Day weekend for the first time since 1946 after Penske on Thursday postponed one of America’s crown jewel sporting events until Aug. 23. “I took the road that gave us the longest distance, five months," he said. "If this thing isn’t over in five months, we’ve got bigger problems.”

It's a rotten way to usher in a new era at both Indianapolis Motor Speedway and IndyCar, the little series that can and wants to but just can’t reach the next level. But now it has Penske, the American industrialist who turned his racing hobby into a mighty empire. He agreed last fall to become just the fourth owner of national landmark Indianapolis Motor Speedway in a deal with the Hulman-George family, which had controlled American open-wheel racing since Tony Hulman bought the dilapidated speedway on the corner of 16th Street and Georgetown Avenue in 1945 at the end of World War II.

Indy was Penske’s personal playground long before Tony George offered him a chance to bid on property everyone believed impossible to pry from the Hulman-George group. His Team Penske drivers won the Indy 500 a record 18 times, and the speedway suites and hospitality areas for decades have been the backdrop for Penske to celebrate his partners and employees.

The water tower for the town of Speedway, Ind., proclaims itself the Racing Capital of the World outside the grounds of the Indianapolis Motor Speedway in Indianapolis, Saturday, March 28, 2020. Roger Penske, at 83 and considered high risk to the coronavirus as a 2017 kidney transplant recipient, still makes the daily three-minute commute to his Bloomfield Hills, Mich, office. He works 12 or more hours a day from his conference room at Penske Corp., which has a skeleton crew all practicing social distancing. Penske also had the small matter of planning his first Indianapolis 500. (AP PhotoMichael Conroy)

The Captain was the perfect man to give the speedway a good cleaning and take the Indy 500 to even greater prestige in the sporting landscape. And the IndyCar Series got the right guy to help its push for relevance. Then came the pandemic, which first put the start of the season on hold and now has delayed the iconic 500.

“It’s a shame Roger has to go through this in his first year of owning Indianapolis Motor Speedway,” said four-time 500 winner A.J. Foyt, also a team owner, “but you couldn’t have a better man in charge."

In a wide-ranging interview with The Associated Press, Penske insisted his commitment remains steadfast to the speedway and the IndyCar Series as the world waits for the pandemic to end. 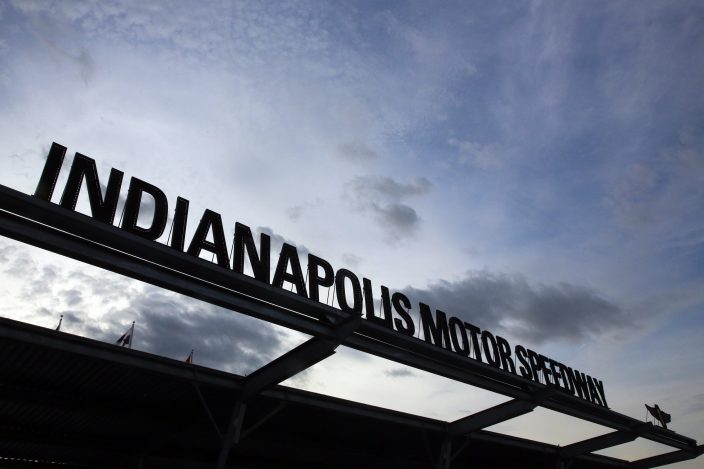 FILE - In this May 26, 2019, file photo, the sun begins to rise at the main entrance to the track before the Indianapolis 500 IndyCar auto race at Indianapolis Motor Speedway in Indianapolis. Roger Penske, at 83 and considered high risk to the coronavirus as a 2017 kidney transplant recipient, still makes the daily three-minute commute to his Bloomfield Hills, Mich, office. He works 12 or more hours a day from his conference room at Penske Corp., which has a skeleton crew all practicing social distancing. Penske also had the small matter of planning his first Indianapolis 500.(AP PhotoR Brent Smith, File)

“This was a commitment we made not for one year; it’s a lifelong commitment for our family and the company and all of our people,” Penske said. “The disappointment certainly is there. But you know, I’ve looked at it as an opportunity to show people that we’re still committed to the sport. We want to rally the team, let them know we are supporting them.”

Penske had his heart set on opening the speedway gates in May to a glistening property he intends to make as pristine and revered as Augusta National. He’s put so much personal effort into pumping up the Indy 500 — from dumping an additional $2 million into the purse to push it to a record $15 million to upgrading the decrepit bathrooms and adding hand dryers — that giving up Memorial Day weekend and Indianapolis' celebration of the national holiday was not easy.

So why not wait a little longer and see if the country opens up, just in case the race that draws crowds in excess of 300,000 could happen?

“You have to make a decision, you just have to, with the number of people involved,” Penske said. “If we wait all the way until May to make these decisions, and you make a last-minute decision, now you don’t have a television partner because you don’t know what the Olympics are doing. Then the Olympics opened up, so I said, ‘Look, I want those dates.'”

Among other issues Penske addressed:

Penske noted that North Carolina, where probably 99% of NASCAR teams are located, as is his entire Team Penske operation, is on lockdown, so there aren’t any cars to be built. He’s put a team of Penske officials in charge of exploring laws in each state to build a clearinghouse so teams from any series can determine what, if anything, they are eligible for under the $2 trillion coronavirus response bill.

He also said the full-time IndyCar teams will be paid as scheduled from the series' bonus programs.

“We’ve committed the first three commitments through their leaders circle to pay them. We’re doing everything we can to help them," Penske said.

IndyCar had hoped to open its season with the road course race at Indianapolis on May 9, but that event has been moved to July 4, mere hours after NASCAR’s debut with the Xfinity Series on the same circuit. It will be an unprecedented doubleheader if it goes off as scheduled, and the idea of the two series merging on one weekend seemed a pipe dream until Penske’s announcement.

Even though NASCAR is expected to revamp its schedule in 2021, Penske Entertainment CEO Mark Miles, in that role for the Hulman-George family, seemed only lukewarm to sharing a weekend with stock cars. Now it’s on the schedule to happen with Penske dealing directly with NASCAR President Steve Phelps and executive Steve O’Donnell. It saved the road course race from becoming a mundane IndyCar event and instead created what could be a first of its kind as the Cup Series is scheduled to run the oval the next day.

“Everybody had their fingerprints on it one time or another,” Penske said. “Ben Kennedy came and looked at the track himself to get a look at the track before we could get Xfinity on it. Then with the coronavirus, when it looked like (May 9) was going to be in trouble, we talked about was there an ability for us to run the IndyCar race with The Brickyard? And that was the discussion with Steve Phelps and then the work with O’Donnell and General Motors. We hope we can do something really special.”

One loss for IndyCar’s Grand Prix is that Australian V8 SuperCars champion Scott McLaughlin will no longer make his IndyCar debut in that event, Penske said, because of the hectic schedule and lack of practice time.

— Rest of the IndyCar schedule:

For now, IndyCar is scheduled to start the season with a doubleheader at Belle Isle in Detroit, the one race Penske promotes, at the end of May. It can be adjusted if needed, Penske said, because Belle Isle could run later in the year. He also said he’s hopeful a return can be worked out with St. Petersburg, Florida, which had the street course built to host the March 15 season opener until the race was called off 48 hours before green flag.

“At the end of October, there’s open dates there,” Penske said. “And, you know, we’ll see how we come out at the end of the other end. But I think the one thing is the most important race that we have has at least 150 days and, you know, running that is the priority.”

Penske continues to work alongside “a very small group” accessing his conference room, and “we’re practicing social distance and we’re cleaning every time anybody comes in or out.”

His transportation operations have been suspended in Germany, Italy, Spain and the U.K., and his race teams can’t currently work.

Penske said he’ll tune in to iRacing for the first time on Saturday when IndyCar drivers and NASCAR’s seven-time champion Jimmie Johnson will stage a virtual race to give fans content. He said he’s had no exposure to esports, noting his grandchildren play hockey and lacrosse.

As to the notion that Penske will ensure that IndyCar and the Indy 500 weather the coronavirus, he’s heard the praise from fellow team owners on his conference calls and appreciates their faith.

“It was a huge relief to get something decided with the 500, not only for me, but the community and the industry. It needed to be locked down,” Penske said. “Within this small group, the team owners, I’ve built the credibility with them both on and off the track. And that means more to me than the next ticket. I’ve got to use every tool I have, all the people we have contacts with, in order to help our teams make the series the best we can. It’s going to be great once we get on the track.”

Barr says he didn’t give tactical order to clear protes ...