The walk to the starting grid for Tony Kanaan began in his Indianapolis kitchen, through the foyer, past the trophy case, up the stairs, down the hall, through the master bedroom, master bathroom and finally into the closet.

That’s where the former Indianapolis 500 winner tucked away Saturday to participate in a full day of iRacing on a simulator in the one place his wife will tolerate the rig. Kanaan participated in two virtual races, a legends event won by three-time Indianapolis 500 winner Dario Franchitti. Then he joined the first of a six-week series that launched Saturday to give IndyCar fans content during the coronavirus pandemic.

IndyCar followed the lead of NASCAR and other racing series in throwing together something - anything - to fill the void created when COVID-19 brought sports to a halt. IndyCar suspended the start of its season 48 hours before the March 15 opener in St. Petersburg, Florida, and on Thursday the Indianapolis 500 was postponed until August. 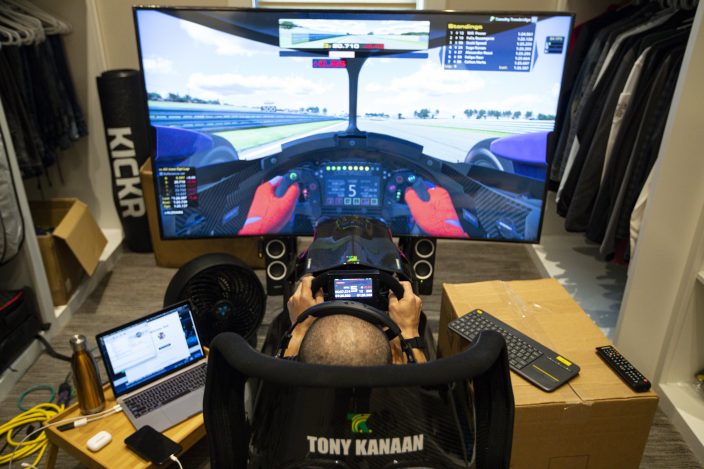 IndyCar driver Tony Kanaan, of Brazil, practices on his racing simulator in his home in Indianapolis, Saturday, March 28, 2020. Kanaan, along with other IndyCar drivers and NASCAR's Jimmie Johnson will compete in the series' inaugural virtual racing event Saturday. (AP PhotoMichael Conroy)

NASCAR had a successful launch of its iRacing series last Sunday and it was the most-watched televised esports event ever with more than 900,000 viewers. IndyCar couldn’t get a television deal so its inaugural race was streamed online from virtual Watkins Glen International Speedway, the venue decided by fan vote.

YouTube streams from IndyCar and iRacing combined for about 45,000 viewers to watch a virtual race called by NBC Sports' regular booth of Leigh Diffey, Townsend Bell and Paul Tracy. The invocation was done remotely, as was the National Anthem, sung by Chicago Blackhawks regular Jim Cornelison.

The field included NASCAR’s seven-time champion Jimmie Johnson, who made his iRacing debut last weekend in a stock car using SIM settings more suited for IndyCar or sports car. Johnson has been using his rig to prepare for potential races in other series upon his retirement from full-time racing at the end of the season. He was scheduled to test an IndyCar next month in Alabama but that’s been canceled amid the pandemic. 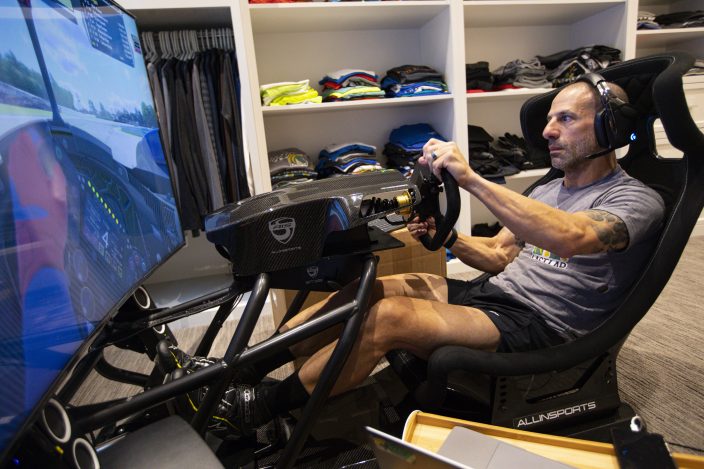 IndyCar driver Tony Kanaan, of Brazil, practices on his racing simulator in his home in Indianapolis, Saturday, March 28, 2020. Kanaan, along with other IndyCar drivers and NASCAR's Jimmie Johnson will compete in the series' inaugural virtual racing event Saturday. (AP PhotoMichael Conroy)

He wore a T-Shirt honoring late open-wheel driver Greg Moore for his virtual IndyCar debut, which he streamed live on his social media channels. Most drivers tried to give viewers an inside look of their experience, including James Hinchcliffe, the popular Canadian who played the part wearing a stereotypical flannel shirt and Team Canada red hat with ear flaps. But a technical glitch stopped his his SIM before the green flag and Hinchcliffe didn’t get to race, er, play, after all.

Hinchcliffe had to go to an Indianapolis-area friends’ house to participate in the race because he doesn’t own a simulator, same with Robert Wickens, who hasn’t raced since his spinal cord injury in a 2018 crash but hoped to be in the iRacing event.

Wickens struggled to find a simulator with a steering wheel equipped with hand controls so he could bypass pedals. The IndyCar community stepped in and Wickens was able to get a simulator from Cary and Todd Bettenhausen, the twin sons of former IndyCar racer Gary Bettenhausen. A steering wheel designed by IndyCar steward Max Papis’ innovation company was shipped from North Carolina, but alas, did not arrive in Indianapolis in time for Wickens to participate. 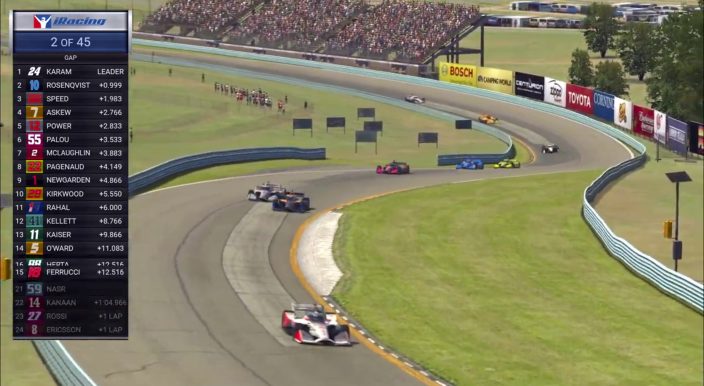 Much like NASCAR’s first event last week, the iRace had a wide range of talents because the younger drivers use iRacing as a training tool, while veterans are new to the gaming rage. Participating in the series requires having the technology – which can be difficult to not only secure in a hurry, but also have installed in a drivers’ home during a lockdown – and the desire to be a good sport for fans starving for entertainment.

Teams also viewed it as an opportunity to showcase their sponsors at a time there’s almost no way for promotion or activation. It was important to many organizations to have their car and sponsor represented, which got Scott Speed a slot in Marco Andretti’s place when Andretti declined to participate.

Australian V8 SuperCars champion Scott McLaughlin entered the virtual event as one of four Team Penske drivers, but it is the closest he’ll get to a race now that his IndyCar debut has been put on hold. He was scheduled to run May 9 on the road course at Indianapolis Motor Speedway but those plans were scrapped when the race was moved to July 4. 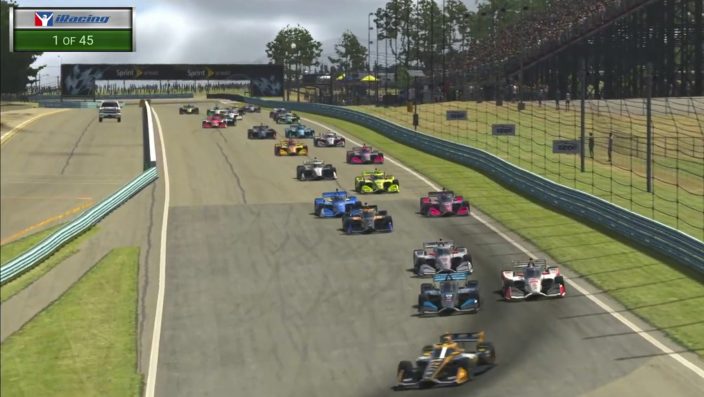 The race results were not surprising as the top iRacers led the way. Sage Karam, who turned 25 in March, won the race with no prior experience at Watkins Glen. Felix Rosenqvist, last year's IndyCar top rookie, was second.

The Penske crew of Will Power and McLaughlin were third and fourth, followed by Indy Lights champion Oliver Askew, who is 23. 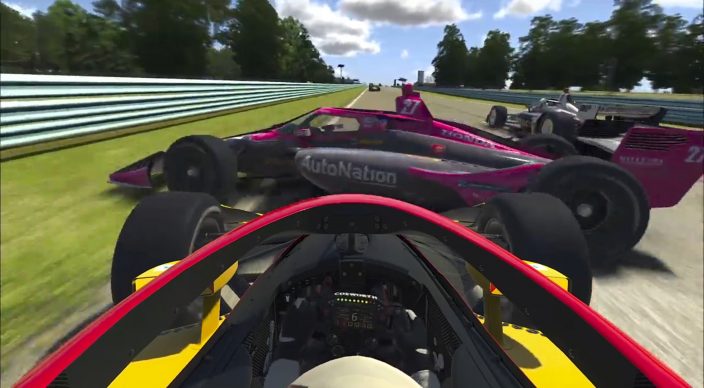