The billions of tax dollars headed for hospitals and states as part of the $2.2 trillion coronavirus response bill won't fix the problem facing doctors and nurses: a critical shortage of protective gowns, gloves and masks.

The problem isn’t a lack of money, experts say. It’s that there’s not enough of those supplies available to buy. What’s more, the crisis has revealed a fragmented procurement system now descending into chaos just as demand soars, The Associated Press has found.

Hospitals, state governments and the Federal Emergency Management Agency are left bidding against each other and driving up prices. 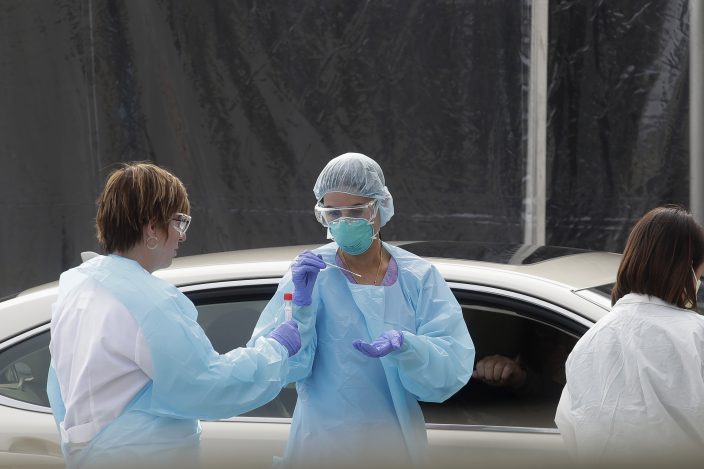 FILE - In this March 12, 2020, file photo, health care personnel test a person in the passenger seat of a car for coronavirus at a Kaiser Permanente medical center parking lot in San Francisco. The Associated Press has found that the critical shortage of testing swabs, protective masks, surgical gowns and hand sanitizer can be tied to a sudden drop in imports of medical supplies. (AP PhotoJeff Chiu, File)

For more than a week, governors have pushed back against administration assurances that supplies are available now, bitterly complaining to President Donald Trump that there's no coordination.

“It’s pretty much every state for itself,” said Virginia's secretary of finance, Aubrey Layne, who is deeply involved with his state’s effort to buy medical supplies.

Masks that were priced at $2.50 a week ago are now being quoted as high as $9, he said, and suppliers make clear that there are “plenty of people out here” looking to buy, even at the high prices. 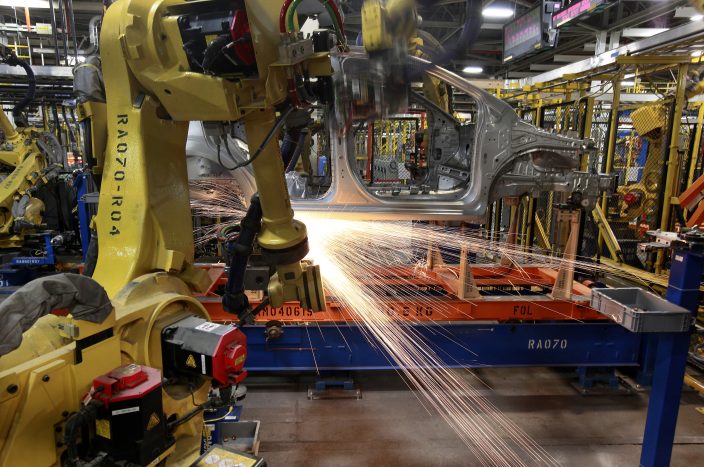 In this May 19, 2011 photo, robots weld a Chevrolet Sonic at the General Motors Orion Assembly plant in Orion Township, Mich. General Motors, Ford, jet engine maker Rolls-Royce and other companies are talking to their governments about repurposing idled factories to produce vital goods to fight the coronavirus such as ventilators and surgical masks. On Friday, March 20, 2020 President Donald Trump invoked the Korean War-era Defense Production Act, allowing the government to marshal the private sector to fight the COVID-19 pandemic. Although it allows the government to steer factories to overcome shortages, makers of heavy goods such as cars and trucks can't just flip a switch and produce something else. (AP PhotoPaul Sancya)

“There is a lot of opportunism going on,” Layne said.

Doctors and nurses in hot spots like New York and New Orleans are caring for feverish, wheezing COVID-19 patients without adequate masks, gloves or gowns.

Can the $100 billion carved out for hospitals in the stimulus package solve that? “It is not about throwing money at this problem,” said Lisa Ellram, a professor of supply chain management at Miami University of Ohio.

Just like consumers who today wander past empty shelves in the toilet paper aisle, state governments and hospitals are finding their suppliers’ warehouses are bare.

The AP reported last week that imports of critical medical supplies were plummeting due to factory closures in China, where manufacturers had been required to sell all or part of their goods internally rather than export to other countries. In this Nov. 11, 2014 photo, Ron Hudgins welds a 2015 Ford F-150 cab at the Dearborn Truck Plant in Dearborn, Mich. General Motors, Ford, jet engine maker Rolls-Royce and other companies are talking to their governments about repurposing idled factories to produce vital goods to fight the coronavirus such as ventilators and surgical masks. On Friday, March 20, 2020 President Donald Trump invoked the Korean War-era Defense Production Act, allowing the government to marshal the private sector to fight the COVID-19 pandemic. Although it allows the government to steer factories to overcome shortages, makers of heavy goods such as cars and trucks can't just flip a switch and produce something else. (AP PhotoPaul Sancya)

Now that bottleneck has tightened as the pandemic sweeps through the world, shuttering potential backup factories from one country to the next. Many manufacturers have been ordered to shut down or limit production throughout Southeast Asia and Latin America, including in India and Mexico. In Malaysia, where 75 percent of the world’s medical gloves are made, AP found factories were shut down and only allowed to reopen with half staff, who are now locked in hostels at their workplaces.

Shipments of medical gloves are down 23% so far this month compared with 2019, and medical gown imports are down 64% for the same period, according to trade data compiled by Panjiva and ImportGenius, services that track imports and exports.

No medical-grade N95 masks, made almost entirely in China, have arrived at U.S. ports so far this month. 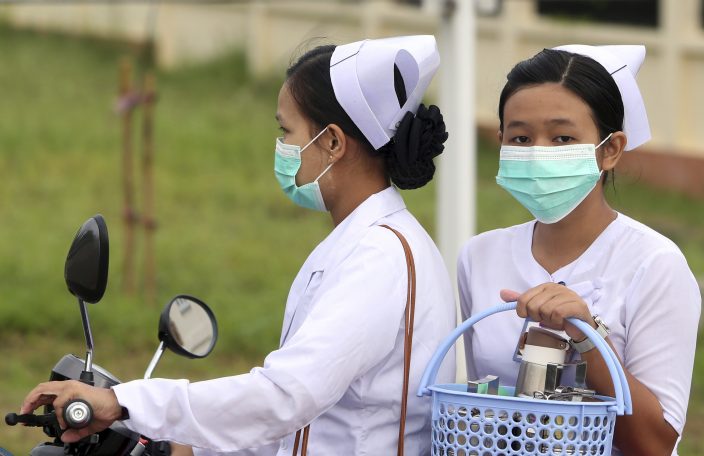 FILE - In this July 25, 2017 file photo, nurses cover their faces with masks to protect from the spread of the swine flu outside the Naypyitaw hospital in Naypyitaw, Myanmar. On Tuesday, March 10, 2020, the U.S. Centers for Disease Control and Prevention posted guidance to doctors and nurses that surgical masks are OK to wear when treating patients who may be sick from the new coronavirus — a decision made in reaction to possible shortages of a more protective respirator masks. (AP PhotoAung Shine Oo)

An Oregon Nurses Association member who spoke on condition of anonymity out of concern for her job said she’s allowed one N95 mask a day to protect against tiny particulates.

A colleague has already tested positive for COVID-19, she said. Her own test was lost so she’s being retested. But she continues to work treating patients even though she has minor symptoms.

Six weeks ago, the Center for Global Development warned that the U.S. should get ready to rapidly scale-up medical supply manufacturing. Minnesota’s 3M Co. was already ramping up, but only in the past week have many others followed.

A frenzied push to increase domestic production is too little and too late, said Prashant Yadav, a visiting fellow at the center.

Trump on Friday announced that he was using his power under the Defense Production Act to order General Motors to begin manufacturing ventilators — work that had already been underway, AP reported.

Yadav said that in addition to more supplies, states and hospitals need a better way to allocate medical supplies to the places they’re needed most.

“The real challenge is not having a clear dashboard-like function that can help match demand and supply. Just infusing more cash doesn’t create that,” he said Friday.

Before the crisis, hospitals typically bought masks, gloves and other equipment through independent purchasers that bargain with suppliers to keep costs down. But those groups haven’t been able to fill orders.

Soumi Saha, director of advocacy at Premier, which purchases equipment for roughly 4,000 hospitals, said 56% of hospitals didn't receive their orders for N95 masks in February. She said traditional wholesale markets are depleted and hospitals are turning to the gray market, rife with scams and counterfeit products. In a 72-hour period last week, Premier fielded more than 130 requests from hospitals to evaluate unregulated suppliers, none of which were legitimate, Saha said.

“The short-term solutions are patchwork. We need to start implementing longer term solutions now or I don't know how much longer the Band Aid can hold on,.” she said.

The new nonprofit Project N95, launched by tech entrepreneurs, former government officials and supply chain experts, is one of many new impromptu clearinghouses for medical equipment trying to solve the crisis.

Its website says it has requests from more than 2,000 institutions needing more than 100 million items of personal protection equipment in the next 30 days.

Hospitals will also receive an additional 20 percent Medicare reimbursement for COVID-19 patients, whose providers can use up to two weeks of personal protection equipment in a single day.

Leaders of both parties promise the money will give doctors and nurses the resources they need.

Lawmakers are "proud to have secured truly historic investment of hundreds of billions of dollars in hospitals, health systems, state and local governments, ensuring that they have the tools they need to combat the virus,” said House Speaker Nancy Pelosi, D-Calif., on Friday.

But even some in Congress are dubious.

“If the administration has a list of critical supplies it is providing, what’s on that list?" said Rep, Norma Torres, D-Calif. "If they’ve conducted a nationwide needs assessment, what did they find? If they’ve met with industry to encourage new manufacturing, who did they meet with?”

The Latest: India has another record jump of cases