Canadian Prime Minister Justin Trudeau said Sunday he will continue to self-isolate at home even though his wife has recovered from the COVID-19 disease caused by the new coronavirus.

Trudeau said he was acting out of caution. "But the fact is I was in the same house with someone who until a few days ago had COVID-19 and therefore the countdown will continue because I could have theoretically caught the virus even just a few days ago so I will remain in isolation."

He suggested that could extend for a little less than an additional 14 days as she stopped showing symptoms a few days ago. 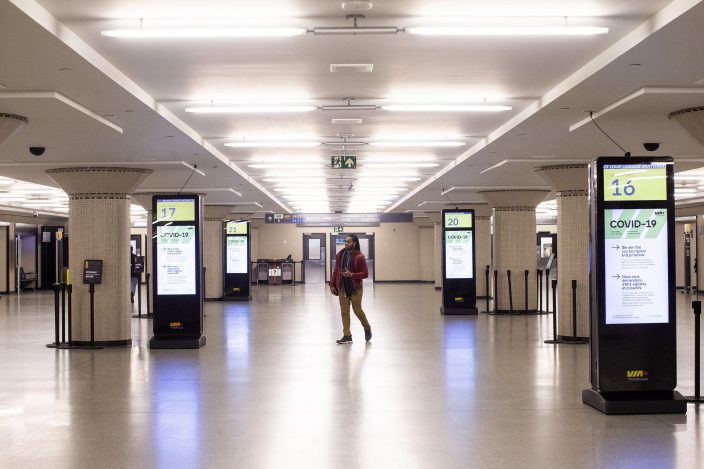 A man walks through a VIA Rail concourse area at Toronto's Union Station during the coronavirus outbreak, Saturday, March 28, 2020. Canadian Prime Minister Justin Trudeau announced that those showing symptoms of COVID-19 will be barred from domestic air and rail travel as of this coming Monday. (Chris YoungThe Canadian Press via AP)

"And of course this is something we are asking everyone else to do. I will continue to work every single day from home," he said.

Trudeau said his wife has taken their three children to the prime minister's summer residence in Harrington Lake in Quebec.

Sophie Gregoire Trudeau received the clearance from her doctor and Ottawa Public Health on Saturday.

Trudeau's office announced on March 12 that she had tested positive for the coronavirus after she fell ill upon returning from a trip to London. The prime minister and his family have been in self isolation at home since then. He and the children have not shown symptoms.

Trudeau: It will be weeks before Canada restarts economy

Trudeau to meet Cabinet in person after wife recovers

Toronto to fine people for not distancing in parks, squares

500-plus Quebec seniors' homes have at least one virus case

Ontario to close all non-essential businesses