As the coronavirus pandemic knocks primary election after primary election off schedule, Democrats argue the outbreak shows the country needs to move toward one of their longtime goals — widespread voting by mail — to protect the November election.

But Democrats' hopes for using the crisis to expand voting by mail face firm Republican opposition, as well as significant logistical challenges. In some states, it would amount to a major revamp of their voting system just eight months before an election.

Vote-by-mail boosters already lost the first round of the fight. Democrats tried and failed to insert a broad mandate expanding voting by mail in the stimulus bill, a proposal that could cost as much as $2 billion. Instead, the bill included $400 million to help states adjust elections however they see fit before November. 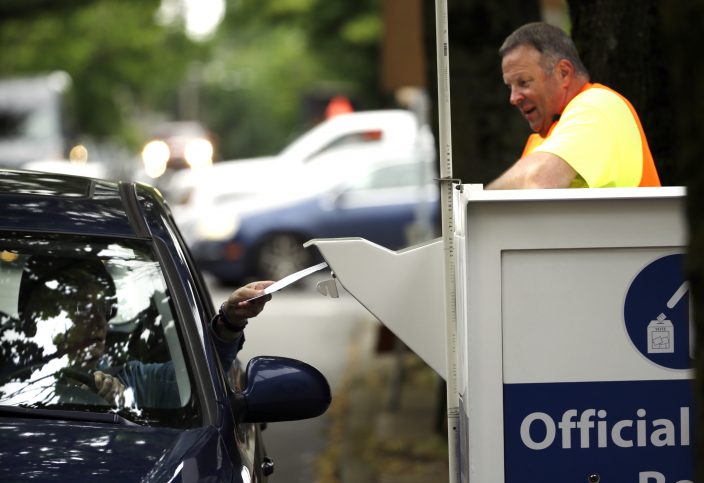 FILE - In this May 16, 2016, file photo election worker Randy Polivka watches as a motorist drops off their ballot at a ballot drop box site in Portland, Ore. The coronavirus has knocked presidential primaries back several weeks as officials worry about voters crowding into polling places. If the disease remains a hazard in November, Democrats say there's only one solution to preserve the November election, national voting by mail. (AP PhotoDon Ryan, File)

But Democrats in Washington say they will keep pressing the issue, pointing to the increasing number of states that are shifting to mail-in voting for primaries as evidence that the time is right.

“Practically every single Tuesday, we see another state reacting to their inability to run their election in the middle of this incredible health care pandemic,” said Democratic Sen. Ron Wyden of Oregon, the first state to vote entirely through the mail. He called expanded mail voting “not even a close call.”

Former Vice President Joe Biden, the leading Democratic presidential candidate, joined the push Sunday. “We should be looking to all-mail ballots across the board,” Biden said Sunday on NBC's “Meet the Press." “We should be beginning to plan that in each of our states.” 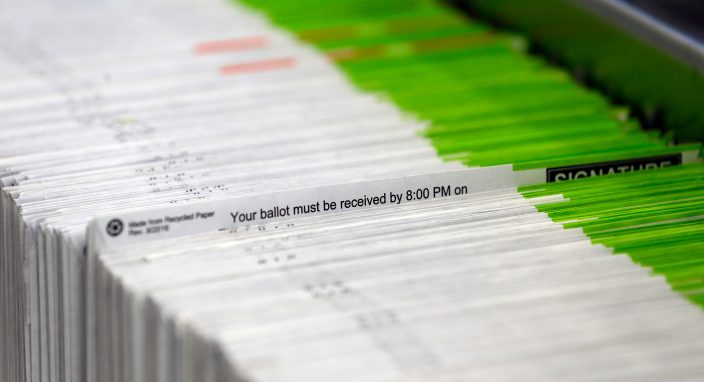 FILE - In this Nov. 8, 2016, file photo, ballots are processed at Multnomah County election headquarters in Portland, Ore. The coronavirus has knocked presidential primaries back several weeks as officials worry about voters crowding into polling places. If the disease remains a hazard in November, Democrats say there's only one solution to preserve the November election, national voting by mail. (AP PhotoDon Ryan, File)

Every state already allows some form of voting by mail, but only six Western states are set up to allow all-mail voting in every county, according to Wendy Underhill at the National Conference of State Legislatures. Meanwhile, 17 states require a formal excuse for voters to get ballots they can mail in, and some have additional requirements. In Alabama, for example, applications for ballots must be returned with a copy of a state ID.

Democrats have long sought to eliminate such rules — either on the state level or by federal mandate — arguing they are barriers to voting, particularly for minorities, the elderly or the disabled.

While Republicans have backed the trend toward mail voting, the party remains suspicious of widespread use of the method — even though there is evidence that its voters benefit the most from it.

President Donald Trump summed up GOP complaints about Democrats' mail-in-voting proposal during an interview Monday on “Fox & Friends." "The things they had in there were crazy. They had things -- levels of voting that if you ever agreed to it you’d never have a Republican elected in this country again," Trump said of Democrats.

Many Republicans argue that a major expansion of mail-in voting opens up new concerns about fraud and security and that the decisions should be made at the state level rather than be dictated by Congress.

“These people who are saying all these states have to change and vote by mail don’t know what they are talking about,” said John Merrill, Alabama's Republican secretary of state who has worked to expand mail voting in his home state. “I think every state ought to be able to make up their mind about what to do in elections.”

There are other, practical hurdles. Mail-in voting requires an expensive upfront investment in machines to process mail ballots, poll workers and election judges to be retrained to use the devices and verify voters' signatures on their envelopes and other wrinkles.

“You can't just flip the switch and go from one system to another,” Underhill said. She noted that official ballots must be printed on durable paper stock, and states may not be able to secure enough for November without sufficient advanced planning. “You can't just get it at Kinko's."

It's also not clear that voting by mail is necessarily pandemic-proof. In Washington state, an early epicenter of the outbreak, Secretary of State Kim Wyman, a Republican, recommended that a special election set for April 28 across 18 counties be canceled because of the virus.

She noted that, under Washington law, voters can register up until Election Day, which requires personal contact with government workers. And sorting of mail ballots typically takes place in crowded offices.

“Most people focus on Election Day and people being able to return a ballot. But there’s lots of activities on the back-end in elections offices," she said.

Many local officials are focused on finding ways to make voting in person safer. In Alabama, Merrill, who pushed local primaries back until mid-July because of the virus, said he plans to spend more money ensuring that polling stations are heavily cleaned and that poll workers have access to protective equipment and sanitizer.

He doesn't want to try to change the state's voting system in a few months. “We're not for introducing new problems. We're for fixing current problems, Merrill said.

Some Republicans see Democrats as trying to take advantage of a crisis.

“Some of these are things that have been kind of partisan issues for a long time and now are being presented as a kind of response to COVID-19,” said Ohio Secretary of State Frank LaRose, a Republican who opposes a federal mandate. "I've called that crisis opportunism. I don't think making big policy changes in response to a crisis is the right thing to do."

Ohio's March 17 primary was delayed at the last minute and changed to an almost-exclusively mail-in contest for April 28.

Michael McDonald, a professor at the University of Florida who tracks voting issues, notes secretaries of state have long resented mandates from Washington on how to conduct elections. But after upfront costs, mail voting is demonstrably cheaper than casting ballots in-person, McDonald said. It also may favor Republicans, whose voters tend to be older and more likely to cast absentee ballots, McDonald found, while Democrats are more likely to vote in person.

Mail voting can also delay election counts, especially in California, which allows voters to mail in their ballots on Election Day. The state is still counting votes from its March 3 primary, in part because the virus outbreak has scrambled staffing in county elections offices across the state.

California Secretary of State Alex Padilla, a Democrat, said states will be able to plan ahead for November to ensure its count is faster. He said he was disappointed that Congress balked at including voting reforms in the stimulus.

“They missed a golden opportunity to strengthen the resiliency of our elections system,” Padilla said.

Trump casts doubt on mail voting. His campaign promotes it.