Virginia's governor on Monday ordered all higher education institutions to stop any in-person instruction amid the coronavirus pandemic, a move likely directed at Liberty University.

The evangelical college in Lynchburg led by President Jerry Falwell Jr. has faced intense criticism over its decision to welcome students back to campus last week after the end of their spring break. The vast majority of classes have been moved online, but the university has said publicly that in-person instruction was necessary for a few select courses.

“We are currently reviewing what the governor said but aren’t able to make a comment at this moment,” said Liberty spokesman Scott Lamb. 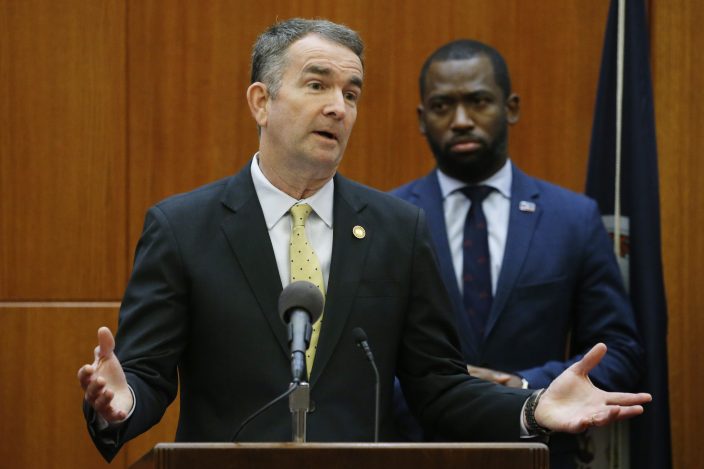 FILE - In this March 11, 2020 file photo, Virginia Gov. Ralph Northam gestures as Richmond Mayor Levar Stoney, back, listens during a news conference at the Capitol in Richmond, Va. In light of the coronavirus pandemic, the governor asked Liberty University President Jerry Falwell Jr. on Wednesday, March 25, 2020, to reconsider his decision to welcome students back to the Lynchburg campus this week after their spring break. (AP PhotoSteve Helber)

Lamb said he couldn't immediately say whether any in-person instruction was continuing Monday, but the university's website specifically mentioned that flight training for aeronautics courses would “remain in the traditional face to face format.”

Falwell, one of President Donald Trump's earliest and most ardent high-profile supporters, has generally characterized concerns about the virus as overblown. He has accused the news media of stoking fear and suggesting coverage has been politically motivated to hurt the president.

Still, the university has said it would comply with all applicable governmental directives and guidance concerning COVID-19, the disease caused by the virus that has crippled economies and upended daily life around much of the world.

Lynchburg, Va., Mayor Treney Tweedy speaks during a City Council meeting Tuesday March 24 , 2020, in Lynchburg, Va. Tweedy delivered remarks on the return of students to Liberty University. Officials in Lynchburg said Tuesday they were fielding complaints and concerns about the hundreds of students that have returned from their spring break to Liberty University, where President Jerry Falwell Jr. has welcomed them back amid the coronavirus pandemic. (AP PhotoSteve Helber)

Last week, Northam quoted from scripture in urging Falwell to rethink "his message that invites and encourages students to return to campus.”

Two weeks ago, Liberty announced a switch, telling students that most classes would be able to finish out the spring term in an online format. 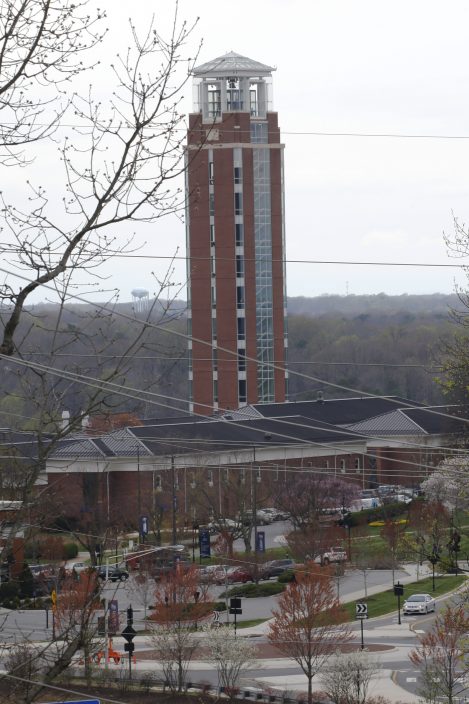 Liberty University's Freedom Tower looms over campus as students were welcomed back to the university's campus, Tuesday March 24 , 2020, in Lynchburg, Va. Officials in Lynchburg, said Tuesday they were fielding complaints and concerns about the hundreds of students that have returned from their spring break to Liberty University, where President Jerry Falwell Jr. has welcomed them back amid the coronavirus pandemic. (AP PhotoSteve Helber)

Certain programs, such as aviation, osteopathic medicine and nursing, and certain types of performance classes, like labs, could not be offered online, a statement said.

“Students in those programs and classes will only be able to take them in person but no classes will involve gatherings of more than 100 people," Liberty said.

Eli Best, a sophomore engineering major from Alexandria in northern Virginia, said he went home for spring break and returned because he had class projects that he thought needed to be finished and required the use of the on-campus machine shop.

“I didn’t see any other way to complete them," he said.

Best said Monday that all the shops and equipment he needed have since been shut down, and he's returned home.

City officials and the top local public health official have said they've been fielding complaints from concerned residents and Liberty parents about the school's response.

The city currently has four confirmed COVID-19 cases, according to the latest information available from the state Department of Health.

Falwell tweeted Sunday night that only one off-campus student who never left Lynchburg had tested positive for the virus — a response to a story in the New York Times that said nearly a dozen Liberty students were sick with symptoms that suggested COVID-19.