Dubai's premier developer Emaar Properties posted on Monday net profits of $1.68 billion for 2019, but revenue slightly dipped for the builder of the world's tallest tower as it faces an even tougher year ahead due to the global coronavirus pandemic.

Emaar said that in view of current circumstances, the company's board did not recommend a dividend to shareholders for 2019. Dubai’s sovereign wealth fund owns about a third of the company, which is publicly traded.

Just as Emaar was releasing its financial results for 2019 and its outlook for this year, local organizers recommended on Monday pushing back Dubai’s Expo 2020 to next year due to the virus that's halted travel around the world. Dubai had bet billions of dollars on the Expo to rejuvenate its troubled economy. In this Thursday, Jan. 30, 2020, photo, Chinese women with face masks walk under the world's tallest tower, Burj Khalifa, in Dubai, United Arab Emirates. The World Health Organization declared the outbreak sparked by a new virus in China that has been exported to more than a dozen countries as a global emergency Thursday after the number of cases spiked tenfold in a week. (AP PhotoKamran Jebreili)

Like other major local developers, Emaar had been pinning hopes on the six-month-long World Fair this fall. In its earnings report, subsidiary Emaar Malls, which owns the world's largest mall, the Dubai Mall, said it was expecting to see success through 2020 due to tourism driven by the Expo.

Emaar recently suspended operations at three of its hotels in the wake of government curbs on all visitor visas due to the virus. The company has not responded to numerous requests for comment by The Associated Press. 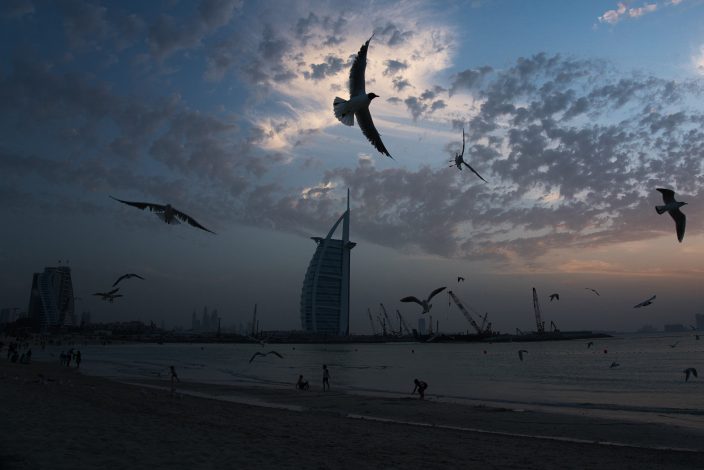 Seagulls soar over those gathered on a beach in front of the luxury Burj Al Arab hotel despite the global new coronavirus pandemic in Dubai, United Arab Emirates, Friday, March 20, 2020. The United Arab Emirates has closed its borders to foreigners, including those with residency visas, over the coronavirus outbreak, but has yet to shut down public beaches and other locations over the virus. (AP PhotoJon Gambrell)

Emaar had last year announced profits of $1.96 billion for 2018, significantly higher than the $1.5 billion in 2017. The 2018 figure, however, was adjusted down to $1.67 billion, according to the latest earnings report out Monday, due to the adoption of new standards and interpretations with regard to taxes, borrowing costs and other factors.

Subsidiary, Emaar Development, also announced lower revenue of $3.45 billion. Net profits were also down from $1.06 billion in 2018 to $735 million last year. The company said it had property sales of $5.2 billion in 2019 in what it described as a challenging market. 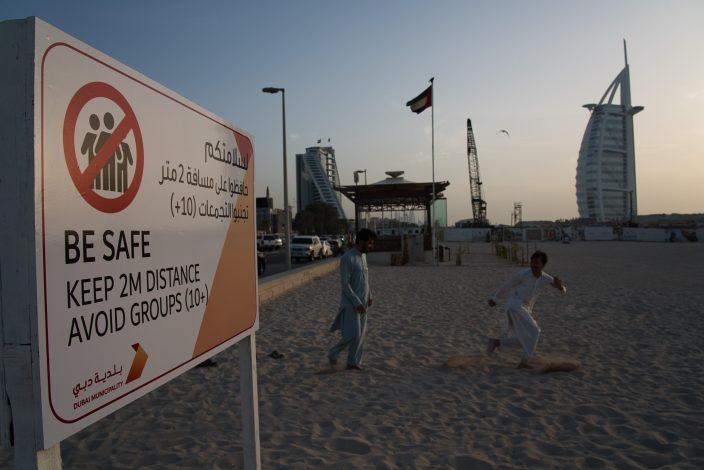 Two laborers play tag near a sign warning people to maintain a distance from each other over the outbreak of the new coronavirus in front of the sail-shaped Burj Al Arab luxury hotel in Dubai, United Arab Emirates, Friday, March 20, 2020. The United Arab Emirates has closed its borders to foreigners, including those with residency visas, over the coronavirus outbreak, but has yet to shut down public beaches and other locations over the virus. (AP PhotoJon Gambrell)

Emaar released its earnings reports on the Dubai Financial Market without a press release as has been the case in past years. Global ratings agency S&P lowered its ratings for Emaar Properties over the weekend.

Emaar has around 30,000 residences under development in the United Arab Emirates and some 17,000 globally. It has built tens of thousands of residential apartments and villas in Dubai and other markets.

A slump in real estate prices last year prompted Dubai’s ruler to establish a commission to slowdown the pace of new construction projects.