A month ago, a massive Carnival party bursting with samba music and smiling faces raged inside Rio de Janeiro’s Sambadrome. Today, its floodlights are off and there's no hint of celebration as its grounds serve a humanitarian purpose: protecting the homeless from the new coronavirus.

Rio’s Sambadrome started receiving homeless people on Monday, with City Hall giving priority to the elderly, pregnant and women with children. It’s one of several large event spaces in Brazil being re-purposed as the nation reports more than 4,500 new coronavirus cases and 150 deaths. Neighboring Argentina is doing the same for its homeless.

Beneath the Sambadrome's bleachers, Rio city authorities have converted three rooms that normally serve as classrooms into dormitories. Sixty beds were occupied on Monday, as authorities work to boost the total to 400. The beds are separated in ventilated and cleansed rooms, and social workers at the shelter check arriving homeless people for symptoms. If they have any, they’re sent to a health post. 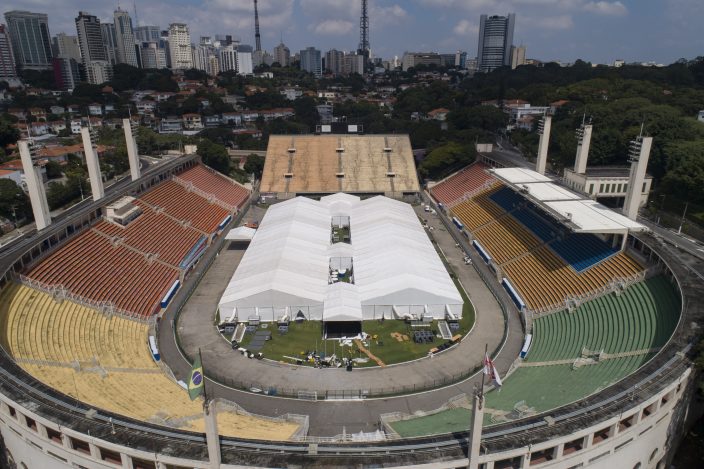 Workers set up a temporary field hospital to treat patients who have COVID-19 inside Pacaembu stadium in Sao Paulo, Brazil, Monday, March 30, 2020. The new coronavirus causes mild or moderate symptoms for most people, but for some, especially older adults and people with existing health problems, it can cause more severe illness or death.(AP PhotoAndre Penner)

“This space will be for sheltering those who accept being protected from the coronavirus,” Jucelia Oliveira Freitas, secretary of social assistance and human rights, told The Associated Press. “This population is the most vulnerable of all. In the streets, they are very exposed.”

Housing the homeless aims to avoid the spread of the virus in Rio state, where there are more than 500 cases -- the second-most of any city. Mayor Marcelo Crivella has said the number of reported cases may represent 15% of the true figure.

Brazil’s President Jair Bolsonaro has downplayed the COVID-19 virus’ severity for those who aren’t elderly or lack preexisting health conditions, and has called for life to return to normal in order to avoid crushing the economy. Health Minister Luiz Henrique Mandetta, however, has said the country is beginning an “upward spiral” of contagion and reinforced the government’s recommendation for social isolation. 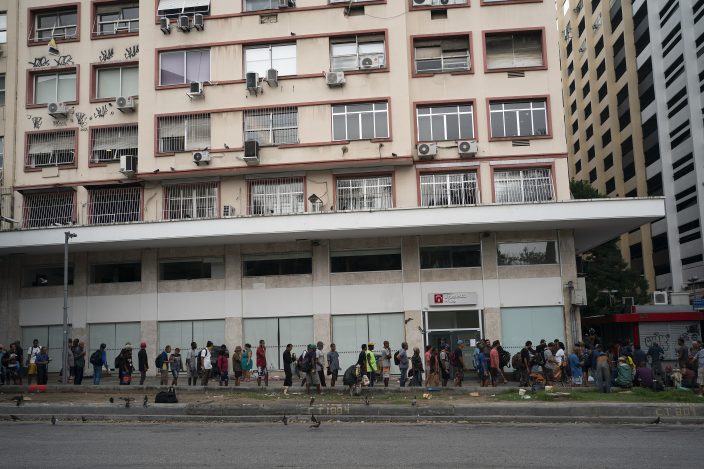 Homeless people wait in line for a cup of coffee and bread from a private charity in downtown in Rio de Janeiro, Brazil, Monday, March 30, 2020, while most other residents are staying home to help contain the spread of the new coronavirus. (AP PhotoLeo Correa)

Federal authorities expect that toward the end of April, Brazil’s public health system may collapse, due to the growing demand from sick patients. That means transformed event spaces and makeshift field hospitals could buy the health system some time.

The pandemic’s advance prompted Rio’s state government to impose lockdown measures, which left the homeless in an even more precarious position. Many saw their means of scraping out a living - for example, collecting recyclables - vanish. Restaurants that sometimes provide assistance are closed, and there is virtually no one in the streets to give alms.

Carlos Alberto, 52, who declined to provide his last name, said he plans to seek refuge at a shelter during the coronavirus crisis because everyone left on the street will be fully abandoned. 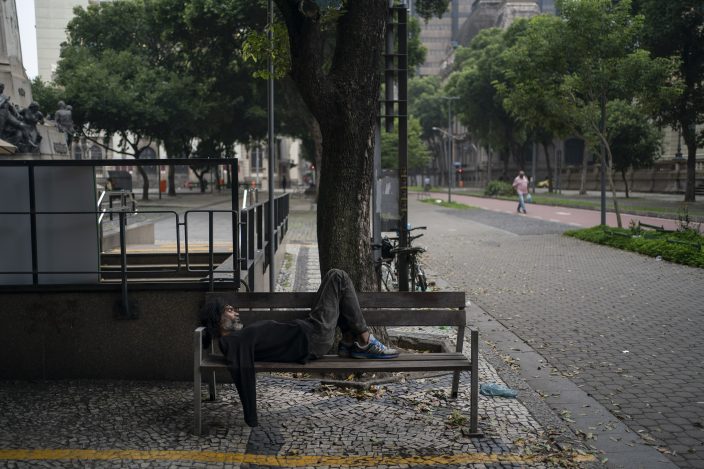 A homeless man sleeps on a bench in an empty downtown Rio de Janeiro, Brazil, Monday, March 30, 2020, while most other residents stay inside indoors to help contain the spread of the new coronavirus. (AP PhotoLeo Correa)

“No one, no one, will come out of their homes to help those that are on the streets,” he said. “I wouldn’t come out. I wouldn’t risk my life, take my car to feed someone.”

Even before Covid-19, Brazil had been struggling to recover from its devastating 2015-2016 recession that boosted the number of people on the streets. The homeless population of Sao Paulo, which has been the focal point for the virus, jumped more than 50% since 2015 to 24,344, according to data City Hall released in January. 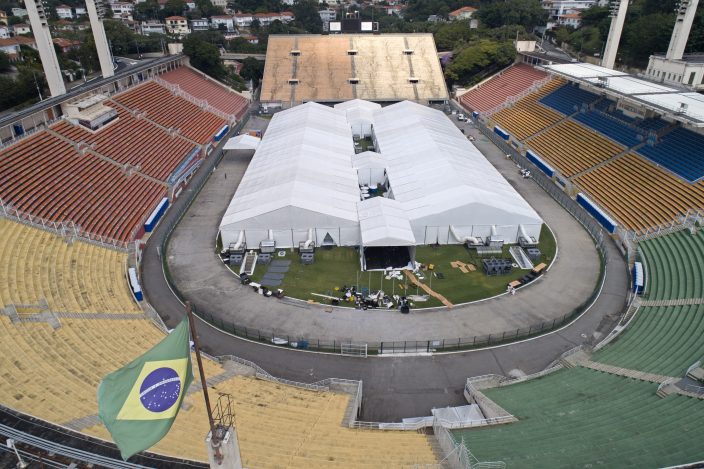 There have been some gestures of solidarity. Eli Ferreira, 54, has since 2013 sometimes traveled by boat from his island neighborhood to the city center, where he serves food to the homeless. But in recent weeks he saw greater need on the streets, and began coming every day. He tripled the amount he distributes daily, to 400 bread rolls and 60 liters of coffee.

“Truly, we are violating the governor’s decree that says people shouldn’t gather, but what has weight at this moment is the human side,” Ferreira said in an interview. Behind him, hundreds of people lined up to receive their rolls.

Other Brazilian cities are likewise revamping sporting centers. In Sao Paulo, the city prepared a field hospital within the Pacaembú stadium, one of the sites of the 1950 soccer World Cup. In Brasilia, the nation’s capital, the local government is setting up a field hospital in its Mané Garrincha stadium, erected for the 2014 World Cup. 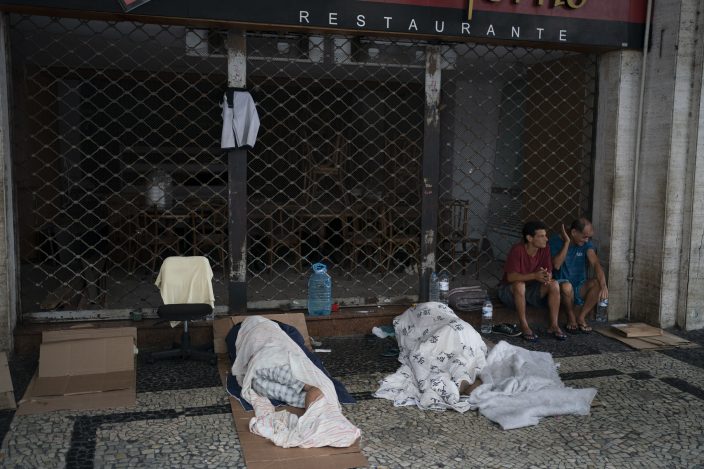 Homeless sleep on the sidewalk outside a closed restaurant in downtown Rio de Janeiro, Brazil, Monday, March 30, 2020, while most other residents stay inside indoors to help contain the spread of the new coronavirus. (AP PhotoLeo Correa)

In Argentina, Buenos Aires’ City Hall is preparing three sports clubs with 250 beds to house the homeless amid the pandemic.

“There is nothing anywhere, not even a bathroom for the people in the street,” said Natalia Bullon, 40, who collects paper and cardboard in the financial district, and sleeps in the city center with her two dogs. --- AP reporter Debora Rey contributed reporting from Buenos Aires.

The Chinese city of Wuhan, where t ...