Abdul-Halim Khaddam, a former Syrian vice president and foreign minister who was one of the most influential figures in the country before defecting in 2005 to France, has died of a heart attack in Paris, Arab media reported Wednesday. He was 87.

Khaddam also played a pivotal role during the civil war in Lebanon and Syria's three-decade domination of its smaller neighbor. But for the past 15 years, since living in Paris, he had worked against President Bashar Assad's government

Since Syria's conflict began in March 2011, Khaddam had been mostly silent and did not play any role in the uprising that later morphed into civil war. 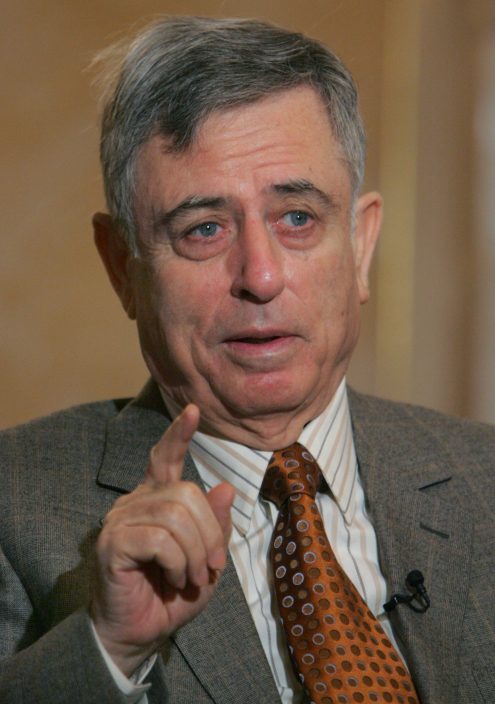 FILE - In this Jan. 6, 2006 file photo, former Syrian vice president and foreign minister Abdul-Halim Khaddam speaks during an interview with The Associated Press, in Paris, France. Khaddam who was one of the most influential figures in Syria before he defected in 2005 to France has died in Paris Arab media outlets reported Wednesday, April 1, 2020. He was 87. (AP PhotoRemy de la Mauviniere, File)

Khaddam's death was not mentioned in Syrian state or pro-government media but was reported by Arab TV stations.

Ibrahim Hamidi, a prominent Europe-based Syrian journalist wrote an obituary in the Saudi-owned daily Asharq al-Awsat. Hamidi told The Associated Press that Khaddam's death was confirmed to him by two sources, including one who visited Khaddam on regular basis.

Several Syrian political activists and former Lebanese Cabinet minister Jamal Jarrah, who was a friend of Khaddam, also tweeted that Khaddam had passed away. He later told Lebanon's An-Nahar newspaper that Khaddam died Tuesday of a heart attack at his Paris home.

Born to a Sunni Muslim family from the coastal town of Banias in September 1932, Khaddam joined the Arab Socialist Baath Party as a teenager and started rising through the party ranks after the political group took over power in Syria in 1963. Khaddam was named governor of the central province of Hama, then governor of the southern region of Quneitra and later minister of economy and trade.

After the November 1970 bloodless coup by then-Defense Minister Hafez Assad, who became president, Khaddam was named foreign minister. He held the post for 14 years and was considered a close confidante to President Hafez Assad, the father of Bashar Assad.

Between 1984 and 2005, Khaddam was Syria's first vice president. After Hafez Assad's death in 2000, Khaddam was acting ruler until Bashar Assad was elected president in a referendum. In the next few years, the influence of the so-called "old guard" close to the late Assad began to dwindle as Bashar Assad brought people close to him into decision-making posts.

Khaddam was also a close friend of Lebanon's former prime minister, Rafik Hariri, who was assassinated on Feb. 14, 2005, in a massive truck bomb in Beirut. Many blamed Syria for the killing, a claim Damascus denies.

"Rafik Hariri was clearly threatened. Several times. I used to hear the threats and send messages to Hariri that he should leave Lebanon," Khaddam said in an interview after he moved to France. "There was spite against the man."

Khaddam himself escaped two assassination attempts, the first in the Syrian capital, Damascus, in 1976, in which he was lightly wounded when gunmen opened fire at his car. In October 1977, he escaped another attempt while in the United Arab Emirates, when a burst of gunfire instead killed the UAE's Minister of State Saif Bin Said al-Ghubash.

After he left Syria, Khaddam was charged with treason and expelled from the Baath party.

Khaddam is survived by his wife, Najat Marqabi, three sons and a daughter.