Executives of Chevron, Exxon and other large and medium-size petroleum companies and industry trade groups, as well as Republican lawmakers, met with Trump in hopes of hammering out a U.S. response as ramped-up oil and gas production from Saudi Arabia and Russia and the coronavirus pandemic pushed oil prices well below $30 a barrel.

“We'll work this out,” Trump promised the oil executives. 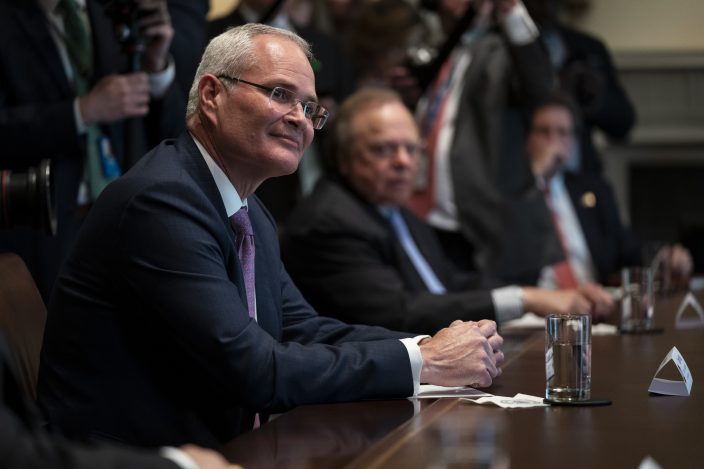 No new action on the oil crisis was immediately announced at Friday's gathering — other than Trump offering to use his position to try to get the oil executives tests for coronavirus, if they chose.

"Let’s test these guys,” Trump added. “Listen, they gave us millions of jobs. If anybody wants to be tested, we’ll test them.” 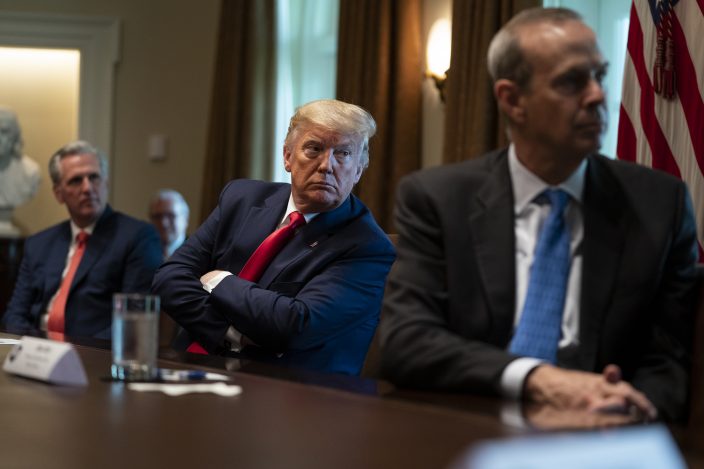 On Thursday, Trump talked of working with Saudi Arabia and Russia to try to persuade them to ease up on oil pumping and back off their oil price war, which threatens more expensive U.S. shale oil production. The two countries “are fighting over this and as everybody knows, it’s, you know, really killing an industry,” Trump said.

But one oil industry expert urged White House and oil company executives to focus on dealing with looming domestic problems from the oil market crisis, pointing to the possibility of U.S. disruptions in diesel fuel for supply trucks -- trucks that Americans homebound by the pandemic increasingly depend upon - amid the market chaos.

“This really requires ... a national coordinated response,” said Amy Myers Jaffe, director of the Council on Foreign Relations energy security program. “You have to think about national security." 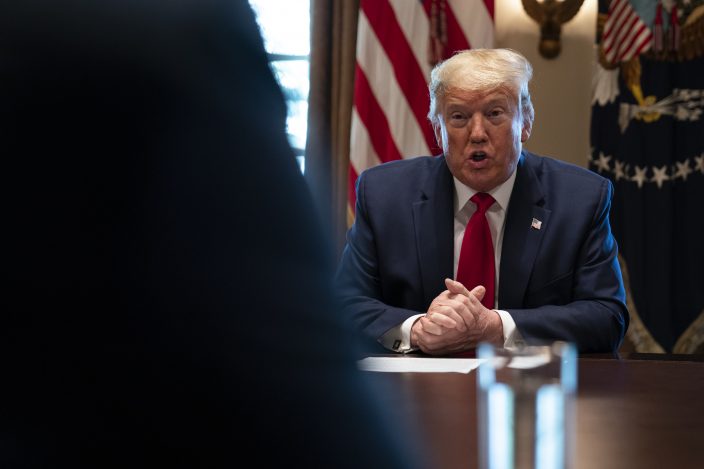 Oil companies were expected to pitch wildly varying actions for the administration. Some GOP lawmakers and small and medium-size oil companies are asking for measures including an oil embargo on Saudi Arabia or tariffs and other punitive measures to persuade the Gulf kingdom to stop flooding the global market with oil, driving down prices.

Harold Hamm, executive chairman of the shale oil company Continental Resources, and a Trump supporter, donor and informal adviser, also asked the Commerce Department to investigate what he contends is illegal dumping of below-cost crude oil onto the market by Saudi Arabia and Russia.

Hamm and Continental together donated more than $1.5 million to Trump’s campaign and political action committee.

One oil industry regulator in Texas, Ryan Sitton, has been floating the idea of production caps and reaching out to leaders from OPEC and Russia, suggesting that offering to cut production in some way might be a negotiation chip the U.S. could bring to the table.

Oil giants, meanwhile — with cash reserves that smaller producers don’t have — have been more willing to let the markets run as they will, knowing they are in better position to ride it out.

The American Petroleum Institute, which represents oil and gas producers as well as refineries, said in a letter to Trump that the group does not want the administration to take any steps that would restrict oil supply.

“Imposing supply constraints, such as quotas, tariffs, or bans on foreign crude oil would exacerbate this already difficult situation, jeopardize the short and long-term competitiveness of our refining sector world-wide, and could jeopardize the benefits Americans experience as a result of our increasing energy dominance,” the group said in a letter signed by Chet Thompson, president and CEO of American Fuel & Petrochemical Manufacturers, and Mike Sommers, president and CEO of American Petroleum Institute.

The summit has oil companies “sitting before the man asking the man to make a decision. And underneath you have this beehive of conversation and activity and who knows how it will turn up,” said Bill Miller, a longtime Texas lobbyist, political analyst and veteran of past U.S. booms and busts.

Hydraulic fracturing and other technological advances unleashed the U.S. shale oil and gas boom in the opening years of this century, pushing the United States to the top spot among global petroleum producers. Russia and others fault U.S. frackers in the current supply glut sending oil and gas prices crashing.

“You couldn’t tell people who spent their whole lives seeking out reserves and reservoirs” to ease up after fracking opened up a new boom,’’ Miller said. It’s ’’hey, I love to eat, and it’s a buffet table.”

A dozen Republican senators also are asking the Trump administration to reduce or suspend royalty payments on public land leases to ease costs for the industry. The industry is also asking Energy Secretary Dan Brouilette, who attended Friday's meeting, to use the country’s Strategic Petroleum Reserve — the underground reservoir of stockpiled U.S. government oil — to ease the supply glut and price fall for the industry.

The Trump administration has encouraged the U.S. oil and gas industry to dominate the world’s energy market and has given it a series of federal breaks. The past two weeks alone, the administration has pledged to ease up on environmental and public health enforcement for the oil industry and others during the pandemic, and published a final rule rolling back Obama-era mileage standards, locking in increased gas and diesel consumption by drivers for years.

The coronavirus hasn’t been kind t ...

Employees of a major group of Fren ...