It would’ve been a magnificent weekend.

Hoops. Music. A confetti shower at the end.

A real celebration of basketball.

Heck, the persnickety spring weather in Atlanta even turned gorgeous Friday, as if it didn't get the memo that there won't be tens of thousands of out-of-town guests. 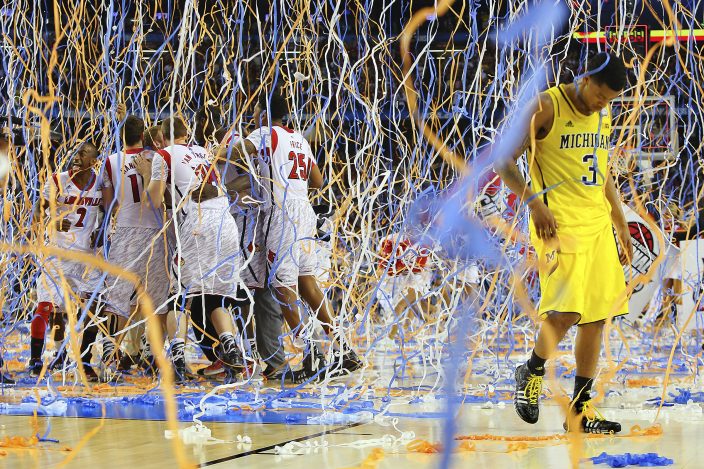 Birds chirping. Azaleas blooming. The temperature climbing into the 70s.

But this will always be remembered as the Final Four that never was, called off because of the coronavirus outbreak and one of the most sobering reminders of what this pandemic has cost the world of sports.

“Given today's weather and the forecast for the weekend, it’s another gut punch to know what could’ve been," rued Dan Corso, president of the Atlanta Sports Council. 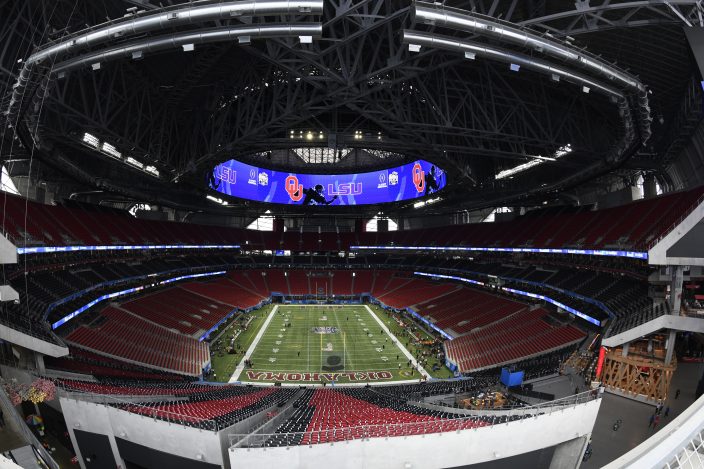 FILE - In this Dec. 28, 2019, file photo, The Mercedes-Benz stadium is shown prior to the Peach Bowl NCAA college football playoff game between LSU and Oklahoma in Atlanta. The Final Four teams would've been in Atlanta, getting in their final practices for Saturday's semifinal games. The $1.5 billion stadium, a retractable-roof wonder normally used for football and soccer, would have undergone a hasty reconfiguration to essentially construct a new lower deck stretching all the way to courtside. Those seats would've been filled with 80,000 fans. (AP PhotoDanny Karnik, File)

The four teams would've been in Atlanta already, getting in their final practices at mammoth Mercedes-Benz Stadium in preparation for Saturday's semifinal games — among the greatest days in sports, without question.

The 3-year-old, $1.5 billion stadium, a retractable-roof wonder normally used for football and soccer, would have undergone a hasty reconfiguration to essentially construct a new lower deck stretching all the way to courtside.

Those seats would've been filled with 80,000 fans. 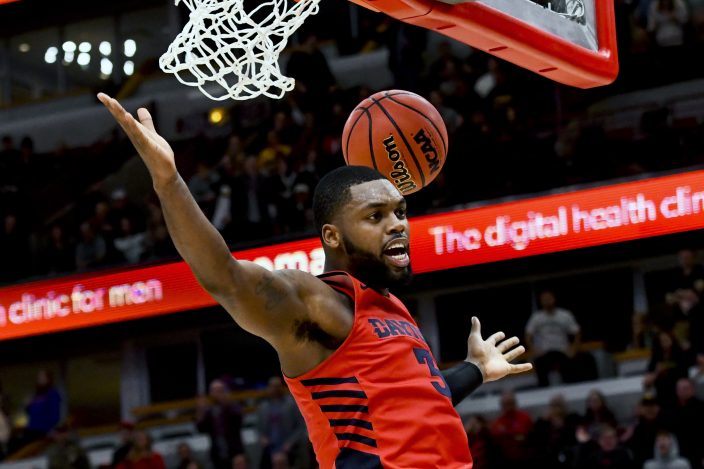 FILE - In this Dec. 21, 2019, file photo, Dayton guard Trey Landers (3) scores in the second half of an NCAA college basketball game against Colorado, in Chicago. This will always be remembered as the Final Four that never was, called off because of the coronavirus outbreak and one of the most sobering reminders of what this pandemic has cost the world of sports. “I wish that all of this was just a dream I could wake up from," senior guard Trey Landers tweeted after the shocking word came down three weeks ago that the season was over. "Wish I could play one more game with my brothers.” (AP PhotoMatt Marton, File)

It would've been electric.

“My son would have been a ball boy this weekend at the Final Four,” CBS Sports reporter Tracy Wolfson tweeted. ”Something he was of course really excited about. In honor, he dressed up today in his Final Four gear.” She added the hashtag: “missingthemadness.”“

Who knows which schools would've made it this far? If we go by the final poll from The Associated Press, Kansas, Gonzaga, Dayton and Florida State were the nation's four best teams. 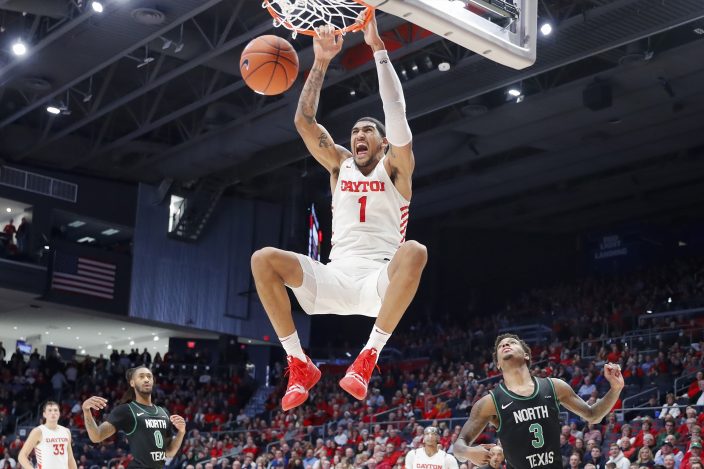 Now that was a team we all could've embraced.

The Flyers were in the midst of a magical season, rolling into tournament play on a 20-game winning streak that had lifted spirits in a city battered in the past year by a mass shooting and devastating tornadoes. 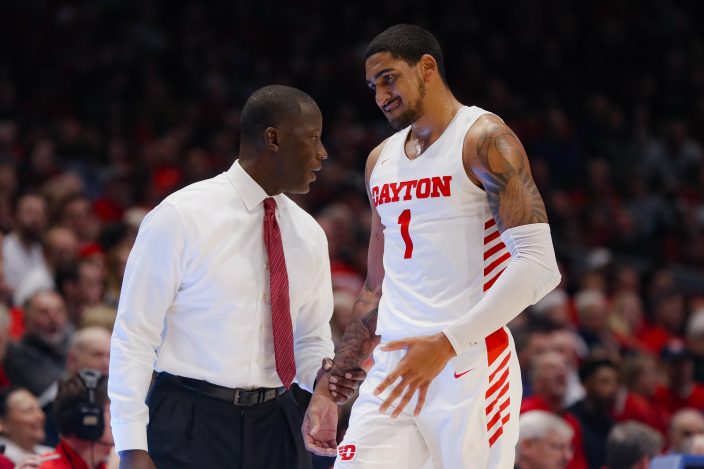 FILE - In this Dec. 14, 2019, file photo, Dayton head coach Anthony Grant, left, speaks with Obi Toppin (1) during the second half of an NCAA college basketball game against Drake, in Dayton, Ohio. Toppin and Grant have claimed top honors from The Associated Press after leading the Flyers to a No. 3 final ranking. Toppin was voted the AP men's college basketball player of the year. Grant is the AP coach of the year. (AP PhotoJohn Minchillo, File)

Alas, we'll never know if this was a team that missed out on its best chance to claim its first national title.

“The storm don’t last forever,” senior guard Trey Landers wrote early Friday on Twitter, no doubt mindful that he could’ve been in Atlanta this weekend. “Always remember that!”

Landers has moved on, signing with an agent in preparation for the NBA draft.

Dayton's high-flying star, AP player of the year Obi Toppin, won't be back next season either. He gave up his final two years of eligibility and will likely be one of the top picks in the draft.

For Dayton, the Final Four window has likely closed.

But we should make sure this special team will never be forgotten, even without a title on its resume.

“Although we feel like there was more for us to try to accomplish over the course of the season, there’s nothing that can take away what these young men did out on the court throughout the entire season,” coach Anthony Grant said.

While the Final Four was the star attraction, this weekend in Atlanta would've been so much more.

A series of free concerts were set to be held at Centennial Olympic Park, capped off by one of Taylor Swift's few live performances in 2020.

On Sunday, the NCAA Division II and III title games were scheduled for State Farm Arena, sandwiched between the stadium and the park, adding to an already tantalizing lineup of hoops and tunes.

Not even a single shining moment.

“We put in a lot of lot of work the last two years," Corso said Friday in a telephone interview. “Today, we were going to see it come to fruition."

For Atlanta, this was supposed to be its fifth time hosting the Final Four. The city likely won't get another shot until 2027, since the NCAA has already doled out its signature event for the next six years.

Out of fairness, the organization should seriously consider pushing everyone back a year, so the A-T-L can get a do-over in 2021.

But that doesn't seem to be an option.

Instead, Corso said, the city is pushing to receive an automatic spot in the next round of Final Fours, which will cover the 2027-31 period. The bidding process begins next summer.

“We've had conversations with the NCAA about seeing if we can get in the next cycle without potentially going through the bid process," he said. “Kind of an automatic bid."

Of course, with the world coming to a standstill as it battles the deadly virus, sports is hardly the most pressing concern. But it will surely be a welcome salve when games are able to resume.

Unfortunately, there's no getting back this Final Four.

Paul Newberry is a sports columnist for The Associated Press.Write to him at pnewberry(at)ap.org, follow him on Twitter at https://twitter.com/pnewberry1963 and find his work at https://apnews.com