Robert Wickens never gave up on his dreams.

When his Formula One hopes fizzled, Wickens worked his way back through the ranks to compete in the IndyCar Series. When doctors told him he might not walk again following a horrific crash at Pocono in August 2018, he set out to prove them wrong.

And now, with some technological help, Wickens is about to return to racing. 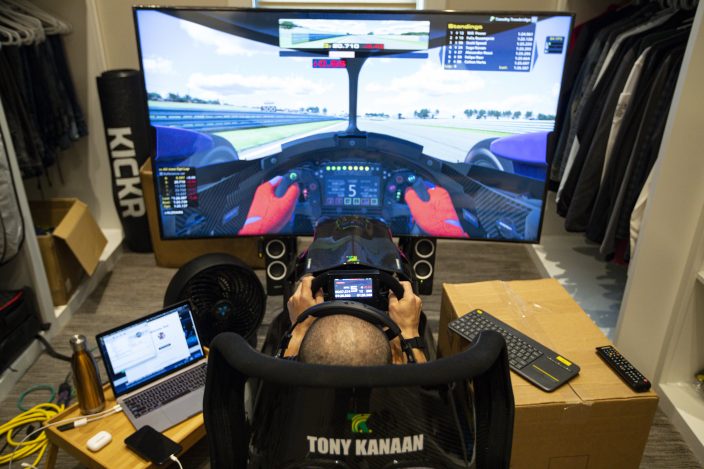 FILE - In this March 28, 2020, file photo, IndyCar driver Tony Kanaan, of Brazil, uses a racing simulator in his home in Indianapolis to practice for a virtual racing event. As Robert Wickens fought his way back from a spinal cord injury, he kept dreaming about the day he could run against his old racing buddies. The promising Canadian driver believes he'll take his biggest step yet by making his debut in the IndyCar iRacing Challenge — a virtual race being held Saturday, April 4, 2020, on the Barber Motorsports Track in Alabama. (AP PhotoMichael Conroy, File)

The Canadian driver is scheduled to compete in the second round of the IndyCar iRacing Challenge — a 45-lap virtual race on an Alabama road course that holds real promise for Wickens' comeback hopes.

“Although this is fun, I see this as the long-term project of getting me back into the race car," he said Friday. “I always knew simulation was going to be the best way to try different hand-brake or paddle configurations. This is step one of 100 to get me back into the NTT IndyCar Series."

It certainly didn't seem plausible after the Pocono crash.

Wickens was airlifted from the track to the hospital where he was diagnosed with a long list of injuries: Thoracic spinal fracture, fractured neck, fractured tibias and fibulas in both legs, fractures in both hands, a fractured right forearm, a fractured elbow, four fractured ribs and a pulmonary contusion. The most serious was the bruised spinal cord.

When doctors told him their prognosis, Wickens was determined to prove them wrong and had the full support of the series' drivers and teams.

Wickens took his rehab to social media so the whole world could watch. In January 2019, he posted a video that showed him walking with assistance. Two months later, he returned to his first race since the crash. In July, at Toronto, Wickens took the pace car for a parade-lap spin with the use of hand controls.

Over the last five weeks, fans have witnessed Wickens doing push-ups, walking on a treadmill and working with a walker.

And now, with NBCSN broadcasting the race, they will get a glimpse into the potential future Wickens and his colleagues have envisioned.

“It’s been great watching his progress," said Will Power, the 2014 IndyCar champion and 2018 Indianapolis 500 winner. “He deserves to be back in the series. Tremendous talent that you know was going to be a champion. I really hope that he gets back, that he can create a system where he can get back in the car and use his talent."

After the 31-year-old Wickens missed last week's event because he couldn't find a suitable steering wheel to bypass the pedals, two arrived this week — one through his team, the other from former IndyCar and Cup driver Max Papis.

Wickens, who worked on simulators while pursuing an F1 career, couldn't start practicing until Thursday afternoon and already feels behind as he tries to dial everything in.

While he doesn't expect to run up front on Barber Motorsports' 2.38-mile, 17-turn road circuit this weekend, Wickens has a different goal in front of a sports world starved for content because of the COVID-19 pandemic.

“I see this as a great training tool for me to make my hand control second nature," he said. “Now obviously with what’s going on in the world, the simulation, the virtual racing, esports, basically took center stage and made it all reality very quickly. I guess you could say I’m almost a beneficiary of what’s happening in the world right now."

Last week, NASCAR drew more than 900,000 viewers to its inaugural event — an esports record. IndyCar and iRacing streamed its race, at Watkins Glen, on YouTube and got 45,000 viewers

Those numbers could increase this week, giving IndyCar an opportunity to showcase its sport, its technology and Watkins' dream quest.

“It’s great to have him out here competing with us," said Graham Rahal, who has competed against Wickens for almost two decades. “The likelihood he’s going to figure this out and kick all of our butts again... Hopefully we can keep up with him a little better on the sim than real life."