Attorney General William Barr ordered the Bureau of Prisons on Friday to increase the use of home confinement and expedite the release of eligible high-risk inmates at three federal prisons where coronavirus cases have skyrocketed.

Officials were told to give highest priority to inmates who are being held at FCC Oakdale, a prison complex in Louisiana where five inmates have died and more than a dozen others remain hospitalized. Also listed were FCI Elkton in Ohio — where three inmates have died — and FCI Danbury in Connecticut, which has reported 20 inmates testing positive for coronavirus.

“We have to move with dispatch in using home confinement, where appropriate, to move vulnerable inmates out of these institutions,” Barr said in a Friday evening memo to the prison system’s director. 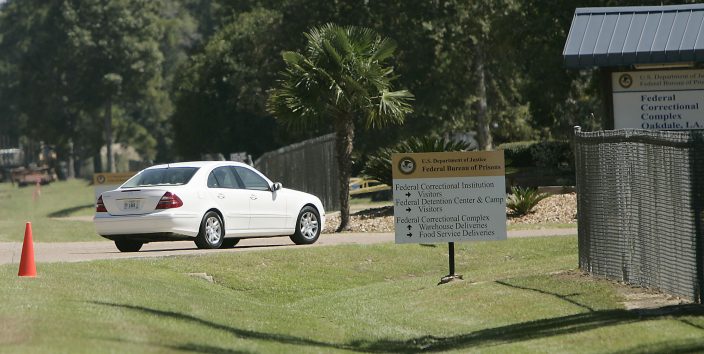 FILE - In this Sept. 26, 2006, file photo a person drive through the gates of a federal prison in Oakdale, La. The federal Bureau of Prisons is locking all its 146,000 inmates in their cells for the next two weeks in an unparalleled effort to slow the spread of the coronavirus, as the focus shifts to the Louisiana compound, where two inmates have died and nearly 20 others remain hospitalized. (AP PhotoRogelio V. Solis, File)

As of Friday night, 91 inmates and 50 staff members had tested positive for coronavirus at federal correctional facilities across the U.S., the agency said. Congressional leaders and prison advocates have been pressing the Justice Department for weeks to release at-risk inmates ahead of a potential outbreak, arguing that the public health guidance to stay 6 feet away from other people is nearly impossible behind bars.

The situation at Oakdale — where union officials say hundreds of inmates are quarantined — is fueling fear among inmates and staff members in the rest of the Bureau of Prisons system that the virus could spread just as rapidly at any of the other 121 correctional facilities, though the rate of infection compared with outside prison is low. Health officials have been warning for more than a decade about the dangers of epidemics in jails and prisons, which are ideal environments for virus outbreaks.

Earlier this week, the agency moved into a new phase of its coronavirus response plan: a nationwide lockdown, keeping all federal inmates locked in their cells for 14 days.

Robert Morris, the local union president for officers at Oakdale, said Barr’s order was a “smart call” that “might save some inmate lives.”

At the hard-hit federal prison in Elkton, Ohio, all employees were given N95 masks this week and plans were in the works to give all 2,500 inmates surgical masks, local union president Joseph Mayle said.

He applauded Barr's order for inmates, but said employees there were “being forced to come to work against doctors’ orders to self-quarantine because the agency refuses to give them emergency leave.”

In the memo, Barr said the protections the Bureau of Prisons has put in place “have not been perfectly successful at all institutions.” He ordered the agency to conduct a review and identify all inmates who may have coronavirus risk factors, beginning with those at Oakdale, Danbury and Elkton.

Under the order, once the Bureau of Prisons identifies an inmate as someone who could serve a sentence at home, they must immediately prepare to release them to home confinement, Barr wrote. All of those inmates would be subject to a 14-day quarantine, officials said.

Israeli leader vows to push ahead with annexing West Ba ...

Over 70% of tested inmates in federal prisons have COVID-19