Scarce supplies of medical equipment are leading to growing competition within the U.S. and among nations, in what one French politician called a “worldwide treasure hunt.”

The governor of New York state, the epicenter of the U.S. outbreak, vowed to seize unused ventilators from private hospitals and companies, while President Donald Trump said he was preventing the export of N95 respirator masks and surgical gloves, a move he said was necessary to ensure that medical supplies are available in the U.S.

The number of people infected in the U.S. exceeded a quarter-million, and the death toll climbed past 7,000, with New York state alone accounting for more than 2,900 dead, an increase of over 560 in just one day. Most of the dead are in New York City, where hospitals are swamped with patients. 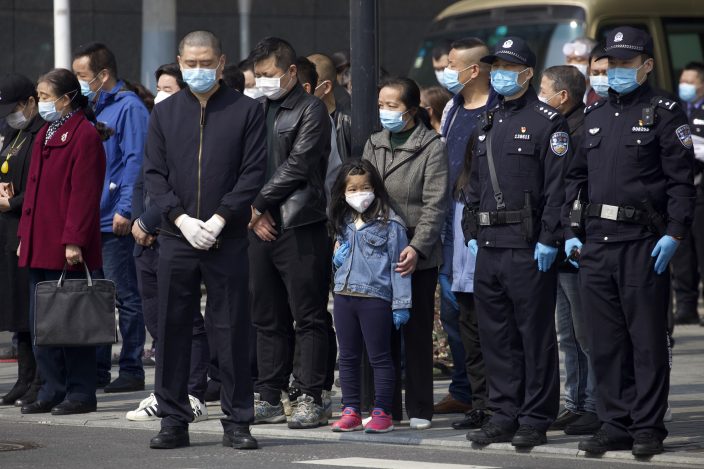 People bow their heads during a national moment of mourning for victims of coronavirus in Wuhan in central China's Hubei Province, Saturday, April 4, 2020. With air raid sirens wailing and flags at half-staff, China on Saturday held a three-minute nationwide moment of reflection to honor those who have died in the coronavirus outbreak, especially "martyrs" who fell while fighting what has become a global pandemic. (AP PhotoNg Han Guan)

Worldwide, confirmed infections rose past 1 million and deaths topped 58,000, according to a tally by Johns Hopkins University. Experts say both numbers are seriously undercounted because of the lack of testing, mild cases that were missed and governments that are underplaying the crisis.

Europe’s three worst-hit countries — Italy, Spain and France — accounted for more than 32,000 dead, or over half the global toll.

In China, where the novel coronavirus was first detected in December, flags flew at half mast and air raid sirens sounded for three minutes on a day of remembrance for the dead. China has cautiously lifted restrictions amid dropping numbers of infections and on Saturday, reported just one new confirmed case in the epicenter of Wuhan and 18 others among people arriving from abroad. There were four new deaths for an official total of 3,326. 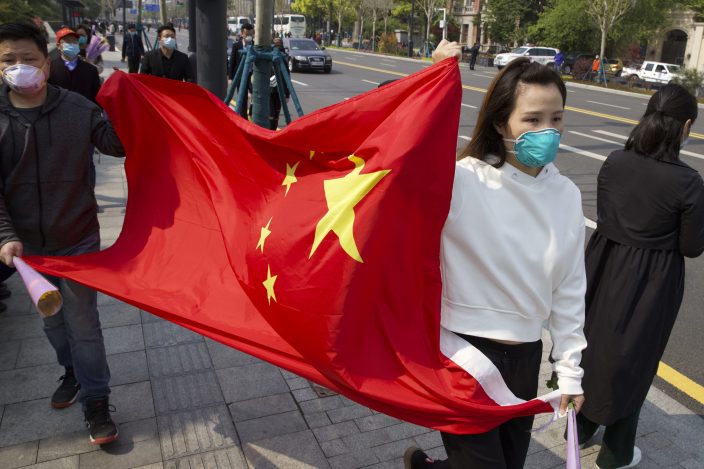 People hold a Chinese flag as they gather outside of a park where an official memorial was held for victims of coronavirus in Wuhan in central China's Hubei Province, Saturday, April 4, 2020. With air raid sirens wailing and flags at half-mast, China held a three-minute nationwide moment of reflection to honor those who have died in the coronavirus outbreak. (AP PhotoNg Han Guan)

During a meeting on anti-virus measures on Saturday, Prime Minster Chung Sye-kyun expressed concern over rising infections linked to recent arrivals amid broadening outbreaks in Europe and the United States.

The country has also struggled to stem infections in hospitals, nursing homes, psychiatric wards and other live-in facilities. 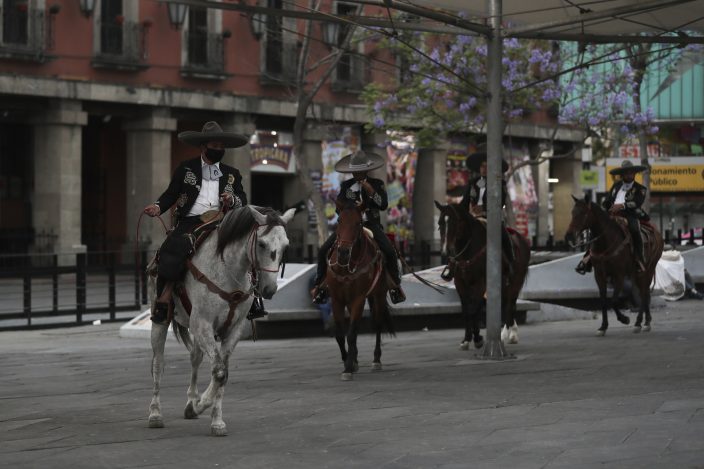 Mexican police dressed as charros patrol the popular Garibaldi square now empty of visitors in Mexico City, Friday, April 3, 2020. Mexico has started taking tougher measures against the new coronavirus, but some experts warn the country is acting too late and testing too little to prevent the type of crisis unfolding across the border in the United States. (AP PhotoFernando Llano)

The economic damage from the lockdowns and closures mounted. The U.S. snapped its record-breaking hiring streak of nearly 10 years when the government reported that employers slashed over 700,000 jobs last month. But the true picture is far worse, because the figures do not include the last two weeks, when 10 million thrown-out-of-work Americans applied for unemployment benefits.

A more immediate concern was the shortage of masks and gloves, leading to fierce competition among buyers from Europe, the U.S. and elsewhere and aggressive measures such as New York state Gov. Andrew Cuomo's plan to take ventilators that aren’t being used. Cuomo says New York, the nation’s worst hot spot, could run out of ventilators next week.

“If they want to sue me for borrowing their excess ventilators to save lives, let them sue me,” Cuomo said. He promised to eventually return the equipment or compensate the owners. 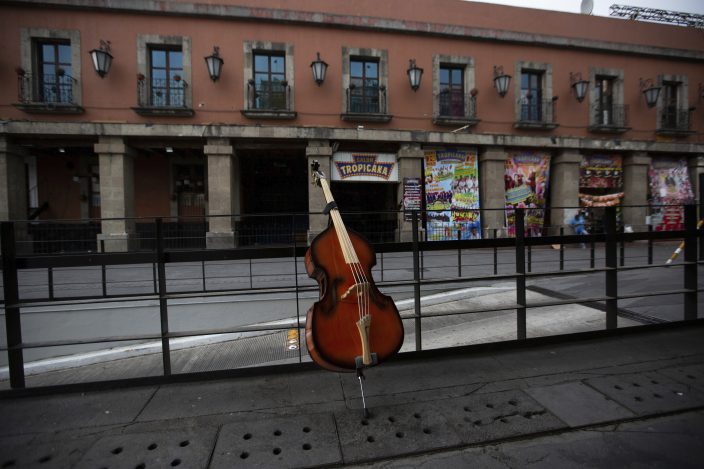 A double bass leans against a barrier in the popular Garibaldi square, now empty of visitors in Mexico City, Friday, April 3, 2020. Mexico has started taking tougher measures against the new coronavirus, but some experts warn the country is acting too late and testing too little to prevent the type of crisis unfolding across the border in the United States. (AP PhotoFernando Llano)

Worldwide shortages have caused health care workers to fall sick and forced doctors in Europe to make life-or-death decisions about which patients get a breathing machine. The search for supplies and bidding wars among buyers have created what Valerie Pecresse, president of France's battered Île-de-France region, called a “worldwide treasure hunt."

The governor of the U.S. state of Louisiana said New Orleans could exhaust its supply by Tuesday.

Amid swelling cases, Our Lady of the Lake Regional Medical Center in Baton Rouge, Louisiana, has gone from one unit dedicated to coronavirus patients to seven. Nurse Christen Hyde said nurses call families twice a day to give updates on their relatives, in some cases delivering bleak news. 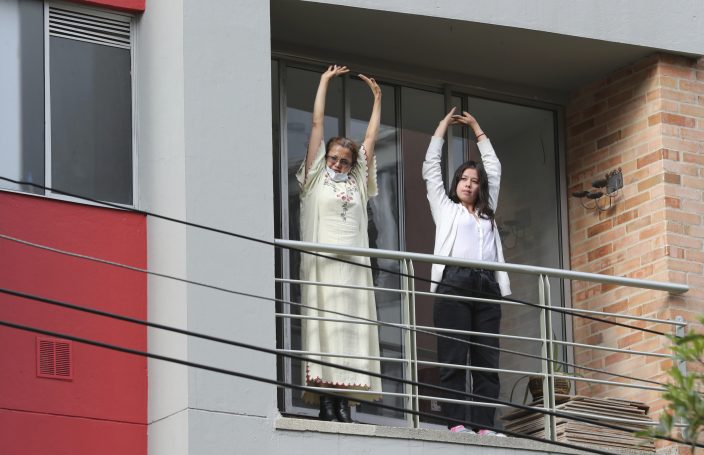 Residents take part in an aerobics class led by city police instructing from the street below during a lockdown ordered by the government in an effort to prevent the spread of the new coronavirus, in Bogota, Colombia, Friday, April 3, 2020. Colombian police visit neighborhoods inviting residents to their windows or balconies to participate in an aerobics class, and encourage social distancing. (AP PhotoFernando Vergara)

“To have to call a family member and tell them that their family member is not doing well and they are probably going to be passing soon is just devastating,” said Hyde, who has had four patients die.

Along with blocking mask exports, Trump announced new guidelines that call for everyone to wear makeshift face coverings such as T-shirts and bandannas when leaving the house, especially in areas hit hard by the pandemic, like New York. But the president said he had no intention of following the advice from the Centers for Disease Control and Prevention.

“It’s a recommendation, they recommend it,” Trump told reporters. “I just don’t want to wear one myself.”

The change comes amid concerns from health officials that those without symptoms can spread the virus, especially in places like grocery stores or pharmacies. Officials stressed that medical-grade masks should be reserved for health workers and others on the front lines of the pandemic, with critical equipment in short supply.

Italy, the hardest-hit country in Europe with about 14,700 dead, continued seeing signs that infections and deaths might be leveling off. France reported a surge of more than 1,000 deaths Friday, bringing its overall toll to more than 6,500.

“The work is extremely tough and heavy,” said Philippe Montravers, an anesthesiologist in Paris. “We’ve had doctors, nurses, caregivers who got sick, infected ... but who have come back after recovering. It’s a bit like those World War I soldiers who were injured and came back to fight.”

Spain recorded over 900 new deaths, down slightly from the record it hit a day earlier. The carnage almost certainly included large numbers of elderly who authorities admit are not getting access to the country’s limited breathing machines, which are being used first on healthier, younger patients.

For most people, the coronavirus causes mild or moderate symptoms, such as fever and cough. But for others, especially older adults and people with health problems, it can cause pneumonia. Over 200,000 people have recovered, by Johns Hopkins’ count.

The Major League Soccer Players As ...