This past week, New York got worse — far worse. In New York City, as morgue space ran out, people started wondering where the bodies will go and the funeral industry struggled to keep up. On the streets of a city accustomed to the exact opposite of social distancing, New Yorkers found a new, gentler reality.

The American president's virus briefings emerged as a strange kind of must-see TV, whether you loved them or hated them, and two Cuomo siblings — a beleaguered governor and his anchorman younger brother — became daily fixtures as well.

From France to Peru to Greece to an Ecuadorean city where bodies were piling up beyond, the effects of the virus — and the efforts to fight it — were evident all over the planet. The spaces we filled were now filled with space — even as Wuhan, China, site of the earliest known outbreak, started to reopen stores and restaurants. 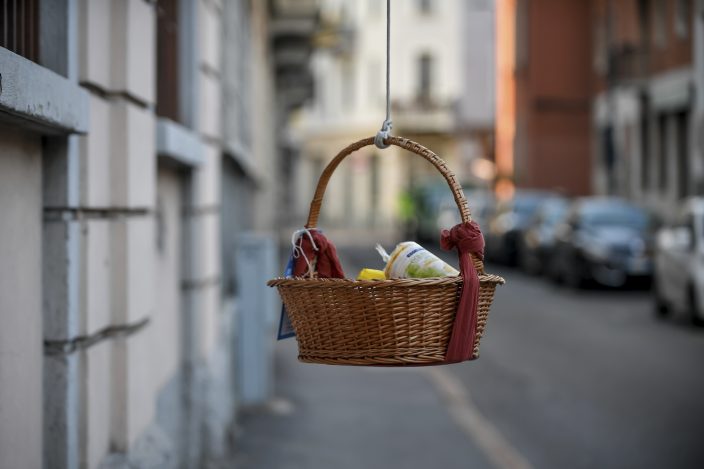 One of the baskets with food and other goods hanging from balconies and left at disposition of people in need during the coronavirus emergency in Milan, Italy, Saturday, April 4, 2020. The initiative, dubbed "hanging baskets", was born after an old Neapolitan tradition, that of the "hanging coffee" (Caffe' sospeso) that customers pay in bars and are left at disposition of whoever enters the bar and asks for it. The new coronavirus causes mild or moderate symptoms for most people, but for some, especially older adults and people with existing health problems, it can cause more severe illness or death. (Claudio FurlanLaPresse via AP)

Germany was scoring early wins because of more testing and intensive-care units; in Spain, where even makeshift ICUs were full, doctors were still making agonizing decisions about who to treat.

Associated Press journalists across the planet chronicled it all — in a week when they lost one of their longtime colleagues to COVID-19. This guide to some of their words and images is a diary of a world at once on pause and in the middle of the biggest fight of its generation. 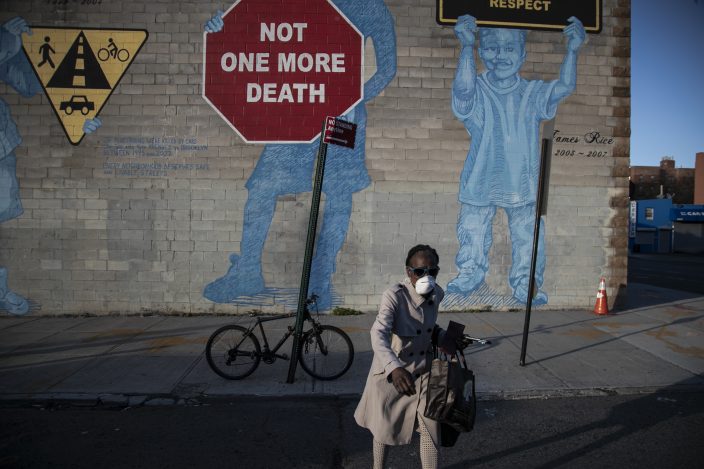 A woman wearing a mask crosses the street in front of a mural about traffic accidents reading, "NOT ONE MORE DEATH" in the Brooklyn borough of New York, March 27, 2020. (AP PhotoWong Maye-E)

The government passed a massive $2.2 trillion relief package to help ease the pain from the pandemic. But the money won’t solve one of the most pressing problems facing those on the front lines of fighting the virus — the lack of adequate medical equipment to care for patients and protect health care workers.

For medical supplies, the marketplace is cutthroat: States and hospital systems are competing against each other, foreign countries and even the U.S. government for medical protective gear and ventilators.

How would overwhelmed hospitals decide who to treat first? Doctors and hospitals are grappling with what happens when they are overwhelmed and can’t offer the most aggressive care to their patients simply for lack of space and equipment. They’re turning to old emergency response plans and medical ethicists to figure out who will get care, and who won’t, when the time comes to choose. 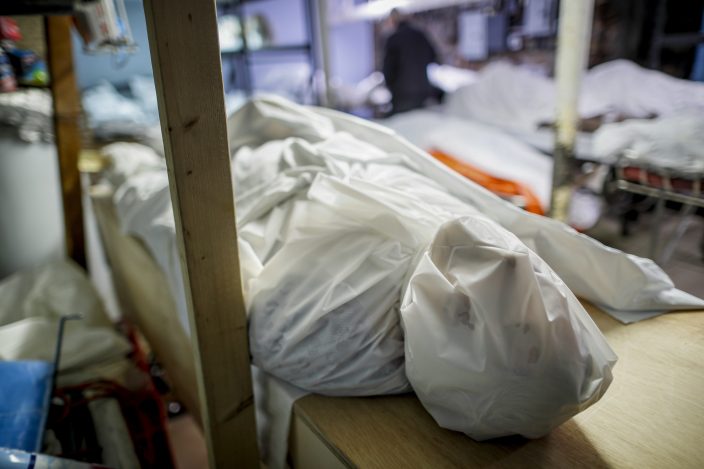 Bodies are wrapped in protective plastic in a holding facility at Daniel J. Schaefer Funeral Home, Thursday, April 2, 2020, in the Brooklyn borough of New York. The company is equipped to handle 40-60 cases at a time. But amid the coronavirus pandemic, it was taking care of 185 Thursday morning. (AP PhotoJohn Minchillo)

While health care workers are in huge demand in some corners, others are seeing their jobs disappear as hospitals, clinics and doctor practices cancel routine appointments and elective surgeries and procedures during the pandemic.

Coronavirus survivors are lining up to donate blood in hopes of helping others, while pregnant women are dealing with having birth plans disrupted along with so much else. And some potentially relieving news: There's no evidence the coronavirus spreads through food.

Finally, some reporting around an enduring question: Why do outbreaks keep happening at nursing homes despite federal lockdown orders imposed last month? 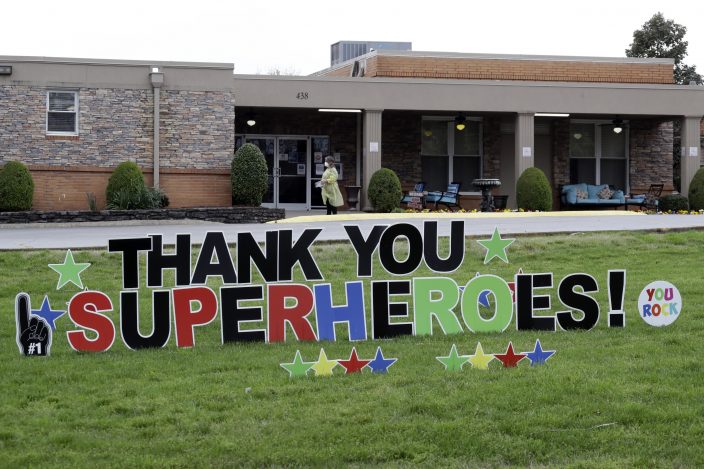 FILE - In this March 30, 2020 file photo, a worker in protective clothing walks into the Gallatin Center for Rehabilitation and Healing in Gallatin, Tenn. Another person has died from a coronavirus outbreak at the nursing home that saw more several people test positive. Sumner Regional Medical Center spokesman Kyle Brogdon confirmed the death from the Gallatin Center for Rehabilitation and Healing. (AP PhotoMark Humphrey, File)

The scramble for virus supplies around the world is testing global solidarity in the battle against the coronavirus. National and corporate self-interest are trumping all as governments, individuals and businesses race to get what they need.

Where are all the ventilators? The slow deployment of ventilators underscores the ways in which the sprawling federal bureaucracy has fallen short in the crisis. Demand for medical equipment far outpaces the current supply, and the stockpiles that do exist aren’t enough for the hardest-hit areas. That undercuts the air of confidence projected by President Donald Trump at his daily briefings. The Pentagon has promised to supply ventilators, but the supply crunch has turned critical. 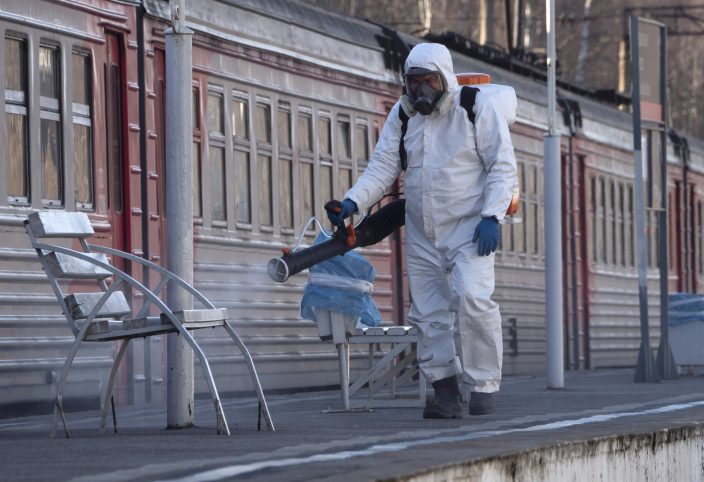 A member from a local veterinary service wearing protective suit sprays disinfectant on a platform of the railway station in Ladozhskoye Ozero village outside St. Petersburg, Russia, Saturday, April 4, 2020. The new coronavirus causes mild or moderate symptoms for most people, but for some, especially older adults and people with existing health problems, it can cause more severe illness or death. (AP PhotoDmitri Lovetsky)

In Ecuador, one of the first Latin American countries to confirm the arrival of the disease, hospitals are turning away patients and bodies are being left on streets and in homes for days in Guayaquil, a normally bustling city of 2.6 million. Medical experts fear the disaster brewing in Guayaquil may offer a frightening glimpse of what awaits the region in coming weeks and months.

Steps taken to slow the spread of the coronavirus have forced state legislatures to meet remotely and greatly limit public access to their deliberations and decisions. And one of the key provisions of the congressional stimulus bill, the $349 billion loan program for small businesses, is likely to benefit businesses that are quite large — potentially leaving little money for the true mom-and-pop operations. 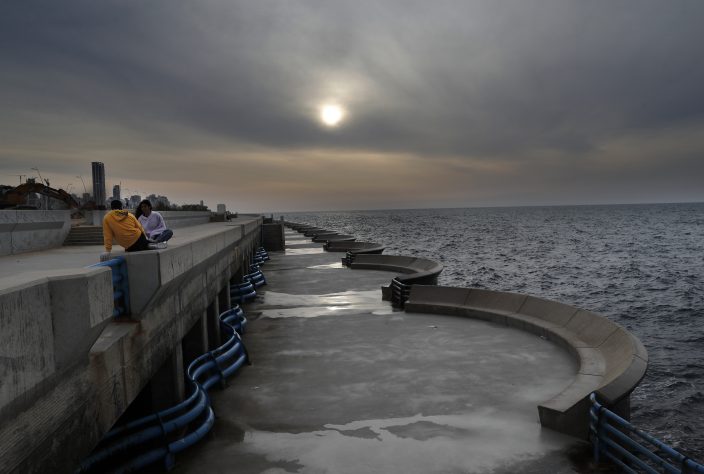 Corrects DATE TO SATURDAY, APRIL 4, 2020 - A couple sit at a waterfront promenade, along the Mediterranean Sea, which is almost empty of residents during a lockdown that imposed by the government to help stem the spread of the coronavirus, in Beirut, Lebanon, Saturday, April 4, 2020. The virus causes mild or moderate symptoms for most people, but for some, especially older adults and people with existing health problems, it can cause more severe illness or death. (AP PhotoHussein Malla)

The scope of the economic damage from the virus came into clearer focus this week, with a series of bleak job reports issued by U.S. and European countries.

In Wuhan, China, people were eager to get back to work after a two-month lockdown, but local officials were enforcing disease checks and other controls that sometimes made that difficult. To board a subway, check into a hotel or just enter Wuhan, where the pandemic began in December, residents must show a green symbol on their smartphone that verifies they are symptom-free. 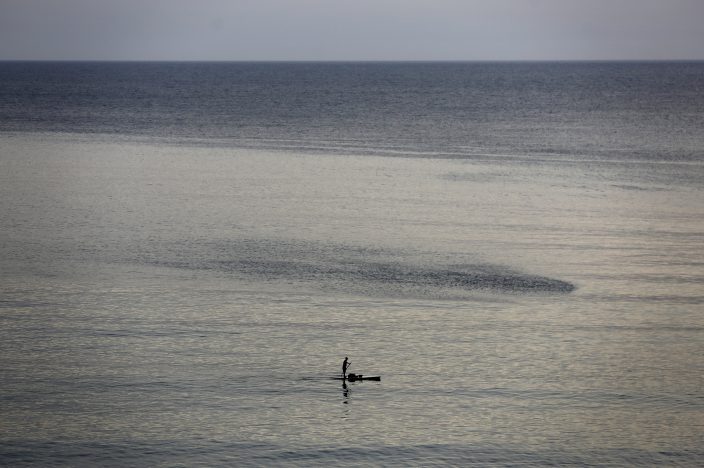 A man stands on his surf on Beirut's Mediterranean Sea, as he back to the beach an hour before the starting of the nighttime curfew that imposed by the government to help stem the spread of the coronavirus, in Beirut, Lebanon, Saturday, April 4, 2020. The virus causes mild or moderate symptoms for most people, but for some, especially older adults and people with existing health problems, it can cause more severe illness or death. (AP PhotoHussein Malla)

Workers still on the job in America worried about their health as cases jumped. As people tried to avoid leaving their houses, prompting a surge in delivery orders, some Amazon and Instacart workers walked off the job, demanding better health protections.

This was the week the rent came due for the first time since the economic crisis hit, and people across America struggled with how to pay. “The way I see it, the whole world is on pause,” one Brooklyn resident who couldn’t pay rent said. “I’d rather allocate my money towards my actual survival, which would be food.”

Across the world, people in some of the poorest countries struggled with how to protect themselves from an enemy they couldn’t see and were unsure they could avoid. In crowded cities from Gaza to Bangladesh, residents questioned how they could possibly socially distance themselves, a question even more urgent for political prisoners crammed into cells across the Middle East. In Latin America, the disease, imported in many cases by the wealthy returning from European vacations, now threatens the poor. In Africa, Zimbabweans faced a stark choice: survive the day or protect yourself from the virus.

Other vulnerable populations struggled as well. Recovering addicts had to deal with this new pressure without face-to-face group sessions, those without reliable internet worked to find ways to study and stay connected with the suddenly distant world and rural communities already suffering under hospital closures wondered how they’d cope if and when the virus comes.

And in the United States, many Asian Americans are using social media to mobilize against some of the racism that has surfaced related to the virus and its origins.

Among those struggling with the new way of life are allergy sufferers, who wonder about every cough as never before, and both introverts and extroverts, who are reacting differently to isolation and quarantine. But even as many face similar struggles, is there — at least in the United States — a shared experience to be found in all of this?

The waters deep beneath the sea may contain some of the few humans who don't realize how the world is changing: submariners. And in one area — the world of pet fostering — the virus may actually be helping things.

Finally, while many associate Hollywood with its A-list stars and glitzy gatherings, the abrupt shutdown of productions has had a profound effect on the front-line workers who cut stars’ hair, organize premieres and edit everything from short videos to feature films. Six front-line workers described how the pandemic has upended their lives, and the hope that when things return to normal, everyone’s going to need “a big global exhale and celebration that it’s over.”

AP’s new daily series “One Good Thing” is in its third week of telling multimedia stories about individuals fulfilling critical needs in desperate times. This week’s unintended theme: food and music, which nourish the vulnerable as well as those working hardest to keep others alive.

Two brothers with a New Jersey pizzeria wanted to ensure they could continue paying their 20 employees, so they took out a loan. Once the news spread about the bosses doing what they could to keep their employees whole, the customers’ donations started rolling in.

A text message between an entrepreneur and a San Francisco emergency room nurse resulted in medical staff receiving donated meals from some of the finest restaurants, several known for their 10-course tasting menus. Said one nurse about a particularly memorable sea salt caramel bread pudding, “It was possibly the best thing I have ever eaten.”

The National Orchestra of France used technology to weave together the sight and sounds of its musicians, who filmed themselves playing alone in their homes into a seamless, rousing whole. Listen to Ravel’s Boléro.

AP correspondents around the world are sharing their vantage points in the coronavirus saga, from Beirut to Cincinnati. Find out more here.

GROUND GAME: INSIDE THE OUTBREAK