Prime Minister Justin Trudeau said Saturday that Canada won’t bring retaliatory or punitive measures against the United States after the Trump administration announced it would prevent the export of N95 protective masks.

President Trump said he would prevent the export of N95 protective masks to ensure they are available in the U.S.

“We need the masks. We don’t want any other people getting it,” Trump said. 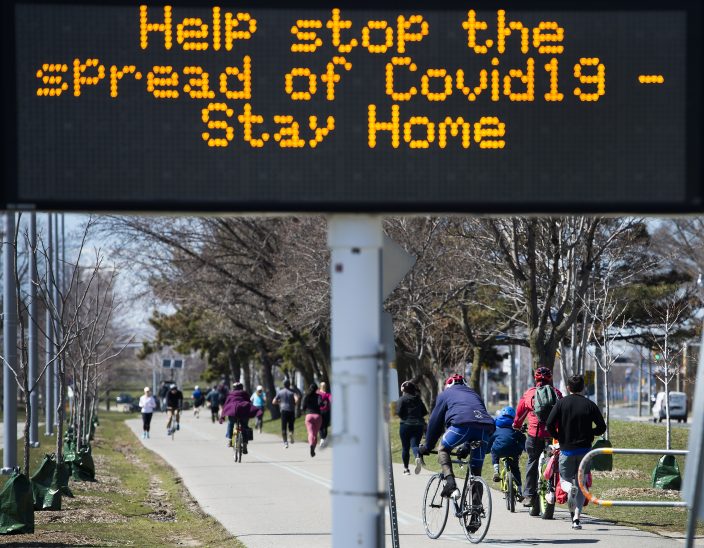 People get exercise outside on the lake shore path along Lake Ontario in Toronto on Thursday, April 2, 2020. Health officials and the government has asks that people stay inside to help curb the spread of the coronavirus also known as COVID-19. (Nathan DenetteThe Canadian Press via AP)

Trudeau said he will speak to Trump in the coming days. He said his officials are having constructive conversations with American officials.

The prime minister said he’ll tell Trump both countries are interlinked in ways that would hurt the nations if supply chains were cut.

“We are not looking at retaliatory measures or measures that are punitive, ” Trudeau said. 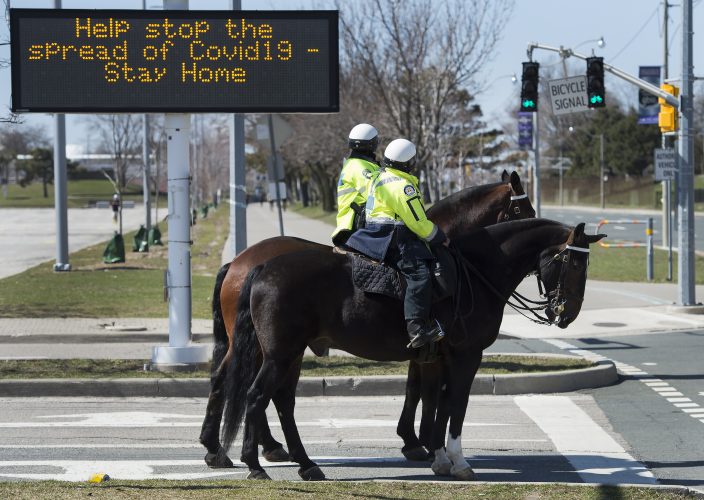 Toronto police officers stop at a red light as they patrol on their service horses in Toronto on Thursday, April 2, 2020. Health officials and the government has asks that people stay inside to help curb the spread of the coronavirus also known as COVID-19. (Nathan DenetteThe Canadian Press via AP)

“We know it is in both our countries interests to cooperate."

The prime minister noted Canada ships gloves and testing kits to the U.S and said materials from the N95 masks originate in Canada. Canadian nurses also cross the bridge in Windsor to work in the Detroit medical system everyday.

He noted health care workers rely on the masks in Canada. 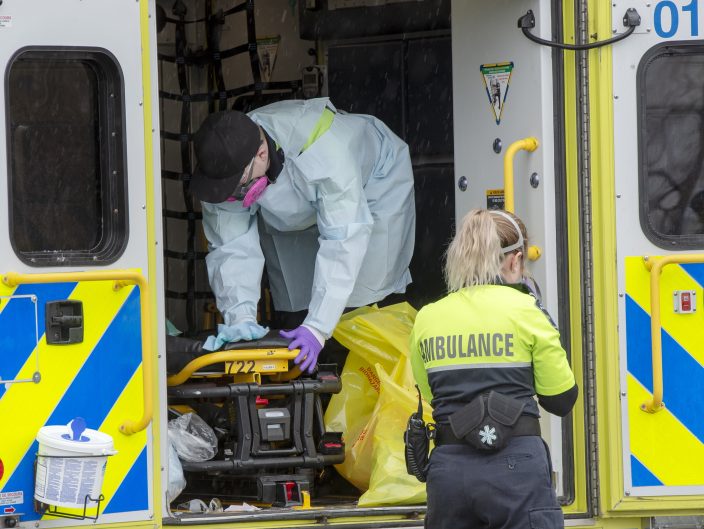 First responders sanitize their ambulance after transporting a patient to the Verdun Hospital, Thursday, April 2, 2020 in Montreal. The hospital has seen a sharp spike in the number of COVID-19 cases among patients and staff. (Ryan RemiorzThe Canadian Press via AP)

Manufacturing giant 3M says there are significant humanitarian implications of ceasing N95 masks to health care workers in Canada and Latin America, where 3M is a critical supplier of respirators.

“We want them to help our country and I think it's going to be OK," Trump said.

Ontario Premier Doug Ford said he couldn't stress enough how disappointed he was in Trump for making the decision and Alberta Premier Jason Kenney didn’t hold back his outrage at Trump’s decision.

“It reminds me of what happened in 1939 and 1940 when Canada was part of the fight against global fascism — the United States sat out the first two or three years and actually initially refused to even provide supplies to Canada and the United Kingdom that was leading the fight at the time,” Kenney said.

Canada has more than 12,924 confirmed coronavirus cases, including 214 deaths. Twenty two of those deaths are linked to one nursing home in Ontario. Canada has conducted more than 309,000 tests.

US blocks millions of masks for Canada, but some allowed

Premier infuriated by Trump, says Canada helped US amId 9/11