The Latest on the coronavir us pandemic. The new coronavirus causes mild or moderate symptoms for most people. For some, especially older adults and people with existing health problems, it can cause more severe illness or death. 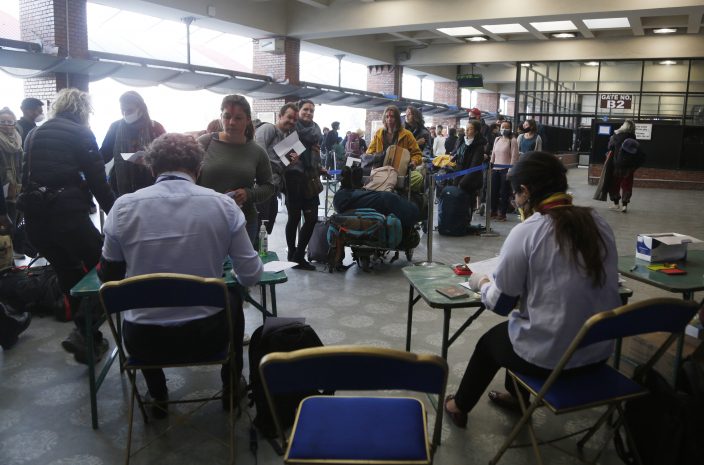 Stranded tourists from various countries register their names to get a rescue flight back to their country during lockdown in Kathmandu, Nepal, Saturday, April 4, 2020. Nepal, home to the highest mountains and hiking trails, is popular with tourists during the spring season when the weather is favorable for climbing. Thousands of tourists are believed to be stranded in Nepal since the government ordered a complete lockdown that halted all flights and road travel to prevent the spread of the virus. Businesses and government offices were also shut. (AP PhotoNiranjan Shrestha)

KATHMANDU, Nepal — American nationals and permanent residents have boarded a flight out of Kathmandu in what was likely their last chance to head home as Nepal prepares to extend lockdown measures to contain the spreading of the new coronavirus.

Sunday’s flight with 303 passengers on board was the second one arranged by the U.S. embassy but paid for by the passengers. 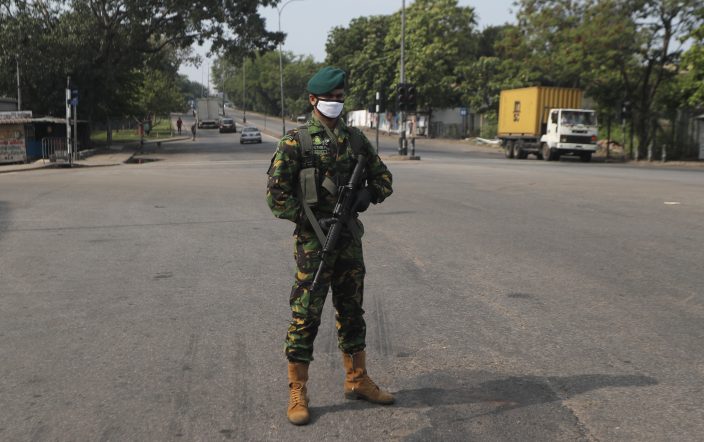 A Sri Lankan police officer mans a check point during a curfew imposed to curb the spreading of new coronavirus in Colombo, Sri Lanka, Wednesday, April 1, 2020. The new coronavirus causes mild or moderate symptoms for most people, but for some, especially older adults and people with existing health problems, it can cause more severe illness or death. (AP PhotoEranga Jayawardena)

The Qatar Airways jet is scheduled to land at Washington D.C. with a fuel stop at Doha.

Nepal’s government has halted all flights and ground transportation, shutting down offices and shuttering businesses since last month to control the spread of the coronavirus.

Nepal has nine confirmed cases including one person who has recovered but no deaths so far.

COLOMBO, Sri Lanka — Nearly 2900 prisoners have been released from overcrowded prisons in Sri Lanka as the Indian ocean island nation has stepped up it’s efforts to contain the spreading of the new coronavirus.

Sri Lanka has been under a countrywide curfew since March 20. Five people have died due to the virus and the total number of confirmed cases have risen to 166.

According to a statement from the president’s office, 2,961 prisoners have been released on bail since March 17.

Sri Lanka’s prisons are highly congested, and the president’s office said at present, there are more than 26,000 inmates while the normal capacity does not exceed 10,000.

Two inmates were killed and six others wounded last month when they scuffled with guards and some tried to escape during a protest against new strict measures to control the spread of the virus.

Prisoners protested after the government banned visitors to prevent the spreading of the virus inside prisons. Visitors often bring home-cooked food when they visit.

BEIJING — Chinese health authorities reported 30 new coronavirus cases Sunday, including 25 people who had arrived from overseas. The other five cases were in southern China’s Guangdong province, which borders Hong Kong.

China has clamped down on international arrivals, banning most foreigners from entering and limiting foreign airlines to one flight per week. Having largely stopped the spread of the disease, the fear is that infected people coming from abroad could spark new outbreaks.

The National Health Commission said that three more people had died, bringing the country’s death toll to 3,329 as of the end of Saturday. The deaths were in Wuhan, where the pandemic began and by far the hardest-hit city in China. The number of confirmed cases stood at 81,669.

The Latest: Officials to keep watch as Australia eases rules

The Latest: India has another record jump of cases

The Latest: South Africa has backlog of nearly 100,000 tests

The Latest: Cyprus to cover costs for infected tourists

The Latest: Greece makes a bit to save its tourism season.

The Latest: South Korea has 25 new cases in small outbreaks