Wang Quanzhang, a well-known Chinese rights lawyer, was released from prison Sunday after being held for more than four years, his wife said.

It was unclear whether he would be allowed to return to Beijing, where he practiced and lived with his wife and young son. Police took him to his house in his hometown of Jinan in eastern China, his wife said in a tweet on her verified Twitter account.

Rights groups outside mainland China said that Chinese police have put other released lawyers under house arrest to isolate them from their network. 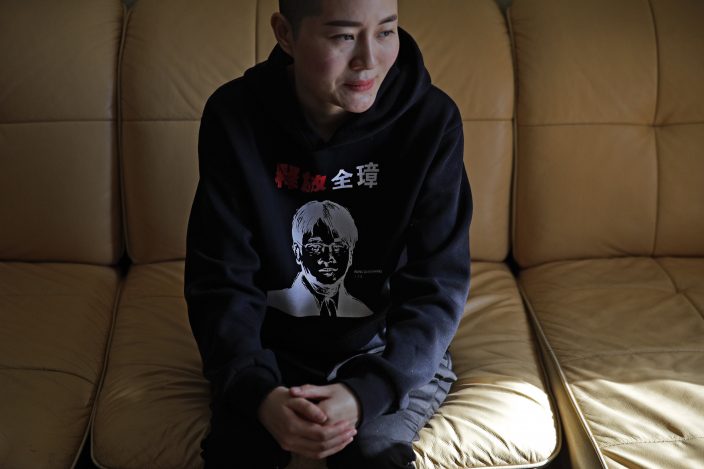 FILE - In this Jan. 28, 2019, file photo, Li Wenzu, wife of prominent Chinese human rights lawyer Wang Quanzhang reacts after Wang's sentencing, at her house in Beijing. Wang was released from prison Sunday, April 5, 2020, after being held for more than four years, his wife said. Wang was among more than 200 lawyers and legal activists swept up in 2015 in what became known as the 709 Crackdown for the date, July 9, when most of them were detained. The sweater Li wears has print of her husband's portrait with the words "Release Quanzhang." (AP PhotoAndy Wong, File)

Wang was among more than 200 lawyers and legal activists swept up in 2015 in what became known as the 709 Crackdown for the date, July 9, when most of them were detained. While authorities had intimidated and harassed lawyers previously, the roundup signaled President Xi Jinping's much tougher approach to quashing any possible threats to Communist Party rule.

Wang, who was picked up in August 2015, had pursued land rights cases for poor villagers and represented members of the banned Falun Gong meditation sect. He was sentenced in January 2019 for subverting state power.

His wife Li Wenzu said in her tweet that Wang had been released about 5 a.m. and taken to his house in Jinan. He called her shortly after 9 a.m. on a borrowed phone. The house was being rented out, but police forced the tenant to leave, she said.

A statement issued by six human rights groups ahead of his release urged China to refrain from putting Wang under house arrest or surveillance and allow him to return to Beijing.