Josh Allert’s days are a blur and a battle.

His mental and physical stamina are constantly put to the test as the 22-year-old emergency medical technician transports coronavirus patients around New York. He is burdened by the push-and-pull between the desire to help at the epicenter of the pandemic and the knowledge doing so separates him from the people he loves. He worries about getting sick or infecting his family.

Sitting in an ambulance as it dashed across New York City near the end of another draining shift earlier this week, the stress overwhelmed him. 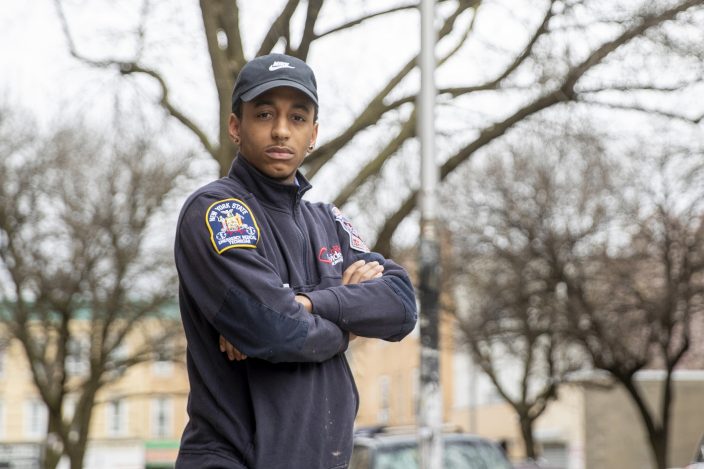 In this Saturday, April 4, 2020 photo, emergency medical technician Josh Allert poses for a photo in New York. Thousands of workers have been thrust onto the front lines of the coronavirus emergency in New York City. That includes Allert, whose days are a blur and a battle. (AP PhotoMary Altaffer)

“I cried on the truck,” Allert told The Associated Press. “I’ve been working this hard and just wanted to go see my family and spend time with them and kiss them and hug them, and I can’t right now.”

Allert is part of an army of workers who have suddenly been thrust onto the front lines of the outbreak in New York, where the staggering death toll from coronavirus has surpassed 4,000.

A month ago, Allert’s EMT job served as his side hustle. Then COVID-19 crashed into the city. Everything shut down, including the computer work he was trying to turn into a full-time gig.

The private ambulance company where Allert moonlights began offering more opportunities. A lot more. During a recent weekend, he put in a 12-hour shift on Friday followed by a 21-hour stint the following day. The phone can ring at all hours.

He was on his Xbox at 2 a.m. recently trying to decompress when they asked him to come in. So he did. Another wearying 18-hour stint followed.

“Technically I’m only part-time, but I know what the deal is,” Allert said. “There’s a lot of patients going in. They need us to take people out. ... It’s hard work. A lot of us are only making a couple dollars more than minimum wage but I’m doing this for my family, trying to help them out.”

The sight of Allert coming into a COVID-19 patient’s room is typically good news. Many of his runs during the epidemic have centered around transporting recovering patients back home to open up beds for the next in a seemingly unending wave.

Yet the process is anything but smooth. Whenever Allert enters a hospital, he is required to have his temperature taken before filling out paperwork concerning his recent whereabouts.

As he navigates hospital hallways in his protective gear, he walks into a sea of patients on ventilators fighting an opponent blind to race, gender and circumstance.

“It’s looking very grim,” Allert said. “A lot of hospitals are overpacked. You got people in the hallways, standing, sitting on chairs. You can see the staff interacting with other patients. Tensions are high, people are frustrated.”

The job is not easy. He’d like to receive hazard pay. He’s not. He’d like his company to have a bigger stash of personal protection equipment. It doesn’t. He’d like for things to return to some semblance of normal. It won’t. Maybe not for a long time.

“There’s still a lot more to go around, as morbid as that sounds,” he said. “This is spreading really fast."

“I’m still working and breathing,” Allert said. ”(My family), I think they’re concerned. They’re Christian. They want you to take your precautions. They believe this is in God’s hands.”