Europe is seeing further signs of hope in the coronavirus outbreak as Italy's daily death toll was at its lowest in more than two weeks and health officials noted with caution Sunday that the infection curve was finally descending. In Spain, new deaths dropped for the third straight day,

But the optimism was tempered by Britain's jump in coronavirus deaths that outpaced the daily toll in Italy.

Angelo Borrelli, the head of Italy's Civil Protection agency on Sunday, said there were 525 deaths in the 24-hour period since Saturday evening. That’s the lowest such figure in the country since 427 deaths were registered on March 19. 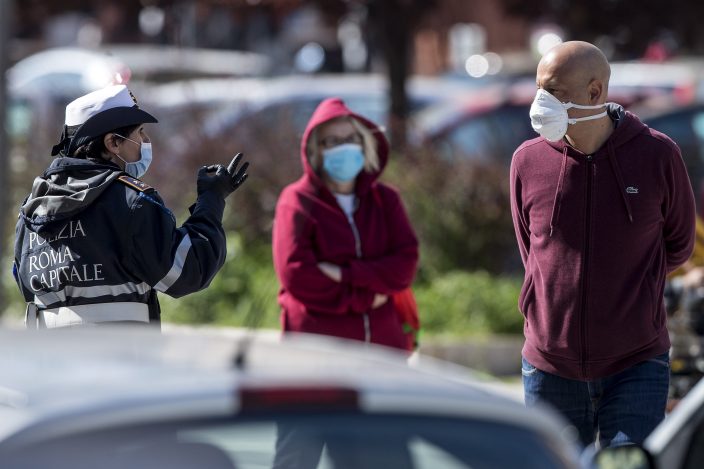 People are turned away by local police as parish priest Maurizio Mirilli celebrates Palm Sunday mass from the his church's bell tower, in Rome, Sunday, April 5, 2020. Churches are closed to faithful all over Italy due to the coronavirus outbreak. The new coronavirus causes mild or moderate symptoms for most people, but for some, especially older adults and people with existing health problems, it can cause more severe illness or death. (Roberto MonaldoLaPresse via AP)

A day shy of one month under a national lockdown that the Italian government ordered, the lower count of day-to-day deaths brought some encouragement.

The number of intensive care unit beds occupied by COVID-19 patients has also showed a decrease in the last few days, including in northern Lombardy, Italy’s most stricken region. 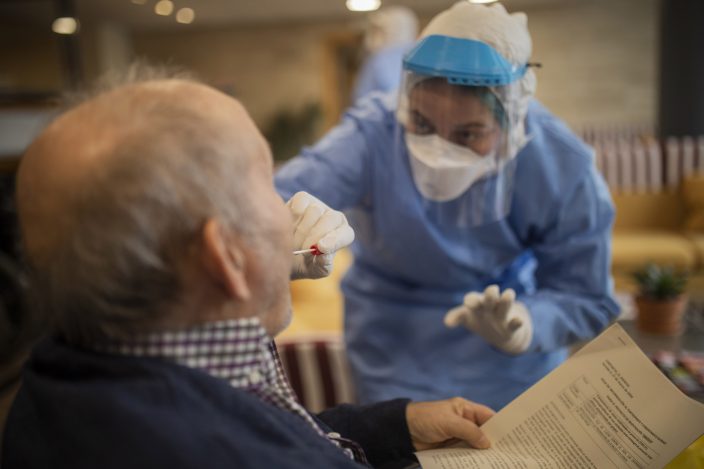 In this photo taken on Wednesday April 1, 2020, aid workers from the Spanish NGO Open Arms carry out coronavirus detection tests on the elderly at a nursing home in Barcelona, Spain. The initiative is part of a clinical trial led by doctors Oriol Mitja and Bonaventura Clotet, from the Lluita Foundation against AIDS and the Germans Trias Hospital, focused on cutting down virus transmission. Spain has seen Thursday a new record in virus-related fatalities that came as the country is seeing the growth of contagion waning, health ministry data showed placing Spain neck to neck with Italy, the country that saw the worst outbreak in Europe. The COVID-19 coronavirus causes mild or moderate symptoms for most people, but for some, especially older adults and people with existing health problems, it can cause more severe illness or death.(AP PhotoSanti Palacios)

Borrelli also noted with a measure of satisfaction that the number of those hospitalized but not in ICU beds also has decreased.

“The curve, which had been plateauing for days, is starting to descend,″ national health official Silvio Brusaferro told reporters, referring to graphs indicating daily numbers of confirmed cases. 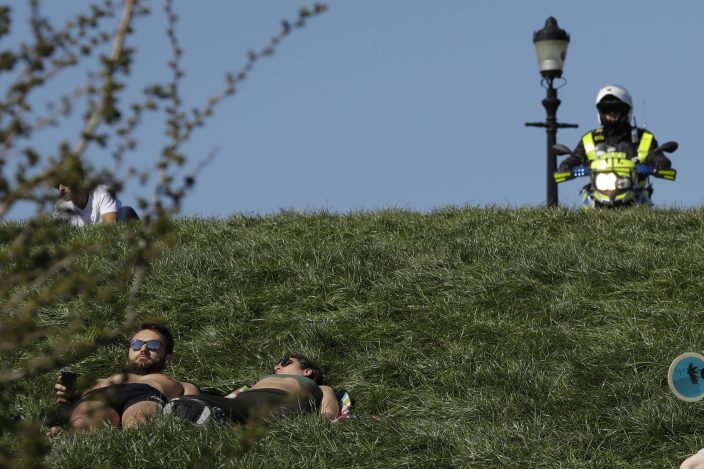 A man and woman lay down sunbathing as a police officer on a motorbike shouts for people who were relaxing in the sun to go home, on Primrose Hill in London, to stop the spread of coronavirus and keep the park open for people observing the British government's guidance of social distancing, only using parks for dog walking, one form of exercise a day, like a run, walk, or cycle alone or with members of the same household, Sunday, April 5, 2020. The new coronavirus causes mild or moderate symptoms for most people, but for some, especially older adults and people with existing health problems, it can cause more severe illness or death. (AP PhotoMatt Dunham)

But Borrelli warned: “This good news shouldn’t make us drop our guard."

For days, anticipating a possible downward slope in the curve, government and health authorities in Italy have cautioned that restrictions on movement would likely last in some form for weeks.

The virus causes mild to moderate symptoms in most people, but for some, especially older adults and the infirm, it can cause severe pneumonia and lead to death.

Britain recorded 708 new coronavirus deaths Saturday while Italy reported 631 deaths that day. With 621 more deaths reported on Sunday, Britain has 4,934 virus deaths overall among 47,806 cases. Those coming down with the virus in the U.K. include Prime Minister Boris Johnson, the health secretary, England’s chief medical official and Prince Charles, heir to the British throne.

There are wide fears that Johnson’s Conservative government didn't take the virus seriously enough at first and that beautiful spring weather will tempt Britons and others to break social distancing rules.

Restrictions on movement vary from country to country. In Germany and Britain, residents can exercise and walk their dogs, as well as go to the supermarket and do other essential tasks.

Swedish authorities have advised the public to practice social distancing, but schools, bars and restaurants are still open.

Spain announced 6,023 confirmed new infections Sunday, taking its national tally to 130,759 but down from an increase of 7,026 infections in the previous day. Spain’s confirmed new virus deaths dropped for the third straight day, to 674 — the first time daily deaths have fallen below 800 in the past week.

“We are starting to see the light at the end of the tunnel,” Spanish Prime Minister Pedro Sánchez said.

Danica Kirka in London, David Rising in Berlin, and Joseph Wilson in Barcelona, Spain, contributed to this report.

The city of Louisville, Kentucky, ...

Europeans soak up the sun but virus travel rules a mishmash

EU agrees on virus economy aid but split over way ahead