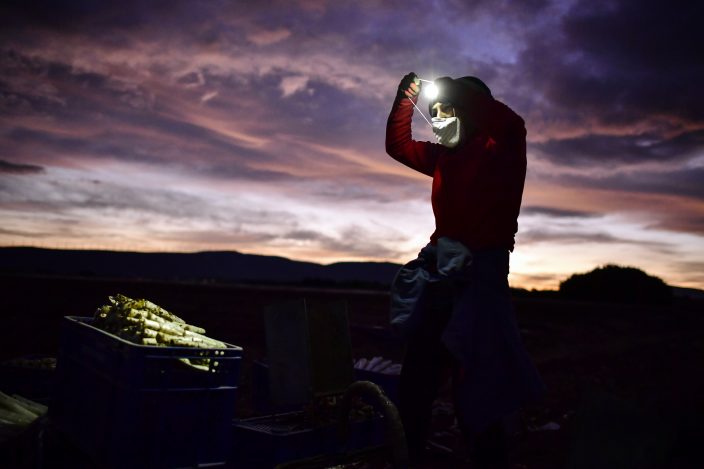 Maria Rivera, a 42-year-old seasonal worker, wears face mask to protect against coronavirus while collecting white asparagus from the field using lanterns in Uterga, around 15 km (9 miles) from Pamplona, northern Spain, Sunday, April 5, 2020. COVID-19 causes mild or moderate symptoms for most people, but for some, especially older adults and people with existing health problems, it can cause more severe illness or death. (AP PhotoAlvaro Barrientos)

VIRUS OUTBREAK-PREPARATIONS — As the first alarms sounded in early January that an outbreak of a novel coronavirus in China might ignite a global pandemic, the Trump administration squandered nearly two months that could have been used to bolster the federal stockpile of critically needed medical supplies and equipment. A review of federal purchasing contracts by The Associated Press shows federal agencies largely waited until mid-March to begin placing bulk orders of N95 respirator masks, mechanical ventilators and other equipment needed by front-line health care workers. By that time, hospitals in several states were treating thousands of infected patients without adequate equipment and were pleading for shipments from the Strategic National Stockpile, which is now nearly drained. By Michael Biesecker. SENT: 2,100 words, photos. An abridged version of 850 words also is available. With VIRUS OUTBREAK-PREPARATIONS-TIMELINE — Timeline of how the virus spread while supply orders lagged. SENT: 960 words, photos. 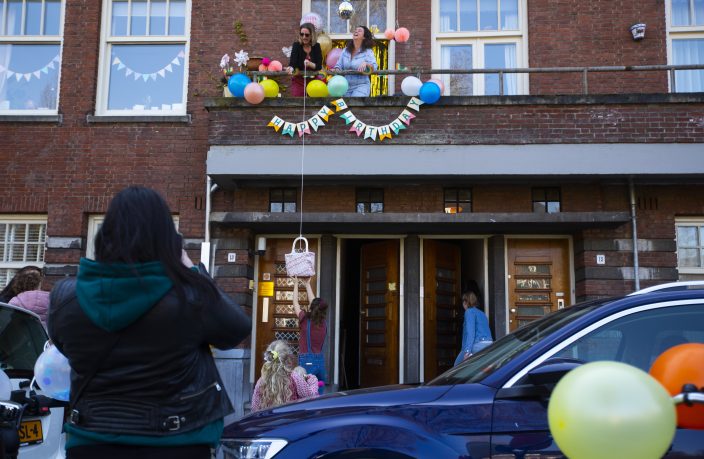 Drinks are lowered in a basket as people observe social distancing when celebrating two birthdays in Amsterdam, Netherlands, Sunday, April 5, 2020. The Dutch appeared to heed government directives to stay clear of forests beaches and parks to avoid large crowds and the risk of spreading the coronavirus. (AP PhotoPeter Dejong)

VIRUS OUTBREAK — Americans braced for what the nation’s top doctor warned would be “the hardest and saddest week” of their lives while Britain assumed the unwelcome mantle of deadliest coronavirus hotspot in Europe after a record 24-hour jump in deaths that surpassed even hard-hit Italy. “This is going to be our Pearl Harbor moment, our 9/11 moment,’’ U.S. Surgeon General Jerome Adams told “Fox News Sunday.” New York City, the U.S. epicenter of the pandemic, saw a glimmer of hope, with Gov. Andrew Cuomo saying that the number of daily deaths had dropped slightly, along with intensive care admissions and the number of patients who need breathing tubes inserted. Still, he warned that it was “too early to tell” the significance of those numbers. By Danica Kirka and David Rising. SENT: 1,140 words, photos. With VIRUS OUTBREAK-THE LATEST,

VIRUS OUTBREAK-WASHINGTON — America’s surgeon general raises the specter of the gravest attacks against the nation in modern times to steel an anxious country for the impending and immeasurable sorrow to touch families in the age of the coronavirus. A government expert says the virus probably won’t be wiped out entirely this year. By Will Weissert and Kevin Freking. SENT: 450 words, photos. UPCOMING: 700 words, photos by 3 p.m.

VIRUS OUTBREAK-STATE-PUBLIC HEALTH — State and local officials were steadily and at times dramatically cutting back on their first line of defense against pandemics and other health emergencies in the decade before the coronavirus pandemic. Funding for public health was slashed at the federal level and for state and local departments after the 2008 recession caused serious budget problems. But as the economy recovered, public health funding did not. A shortfall persisted despite several alarming outbreaks, from H1N1 to Ebola, and experts say it has left the U.S. more vulnerable now to COVID-19. By Sara Burnett. SENT: 850 words, photos.

VIRUS OUTBREAK-FRONT LINE GROCERS — Grocery workers across the globe are working the frontlines during lockdowns meant to keep the coronavirus from spreading. Their stores are deemed essential, and their work puts them close to the public and therefore at risk. Often in low-wage jobs, the workers have earned praise from Pope Francis and former U.S. President Barack Obama. But with infection and death rates climbing, workers are demanding better pay, protections and access to testing. By Jim Vertuno. SENT: 950 words, photos.

VIRUS OUTBREAK-MEDICAL WORKERS-ISOLATION — Countless doctors and nurses who face an increased risk of exposure to the coronavirus are moving away from their families to protect them. Health care providers have moved to campers, hotel rooms, tents, garages and other temporary housing as they risk exposure to a virus that has claimed tens of thousands of lives worldwide. By Amy Forliti. SENT: 840 words, photos.

VIRUS OUTBREAK-TUSKEGEE-MISTRUST — Roughly 40 million black Americans are deciding minute by minute whether to put their faith in the government and in the medical field during the coronavirus pandemic. Some might call it the Tuskegee effect, referring to the U.S. government’s once-secret syphilis study of black men in Alabama that one study shows later reduced their life expectancy due to distrust of medical science. By Aaron Morrison and Jay Reeves. SENT: 1,070 words, photos. This is the Monday Spotlight.

VIRUS OUTBREAK-PALM SUNDAY — Pope Francis celebrated Palm Sunday Mass in the shelter of St. Peter’s Basilica without the public because of the coronavirus pandemic, while parish priests elsewhere in Rome took to church rooftops and bell towers to lead services so at least some faithful could follow the familiar ritual. SENT: 890 words, photos. With VIRUS OUTBREAK-MIDEAST — Jerusalem’s Palm Sunday procession scaled back due to virus. SENT: 990 words, photos.

VIRUS OUTBREAK-PANDEMIC-PASSOVER — Passover and its epic story — how the Jewish people escaped to freedom after plagues struck their oppressors — are uniquely resonant this year, as Jews find ways to honor the holiday amid the outbreak of what feels like a real-life plague. SENT: 800 words, photos.

VIRUS OUTBREAK-THE FRENCH WAY — France is moving hundreds of critically ill COVID-19 patients around the country on specially fitted high-speed trains, planes, even a warship. The exceptional journeys are carefully coordinated to relieve overwhelmed hospitals and try to stay ahead of the fast-moving virus. By Sylvie Corbet and Angela Charlton. SENT: 990 words, photos.

VIRUS OUTBREAK-QUEEN — In a rare address to the nation, Queen Elizabeth II plans to exhort Britons to rise to the challenge of the coronavirus pandemic, drawing on wisdom from her decades as Britain’s head of state to urge discipline and resolve in a time of crisis. SENT: 500 words, photo.

VIRUS OUTBREAK-EUROPE — Europe is seeing further signs of hope in the coronavirus outbreak as Italy’s daily death toll was at its lowest in more than two weeks and health officials noted with caution Sunday that the infection curve was finally descending. In Spain, new deaths dropped for the third straight day, But the optimism was tempered by Britain’s jump in coronavirus deaths that outpaced the daily toll in Italy. SENT: 560 words, photos.

VIRUS-OUTBREAK-MEDICAL-WORKERS — Experts and health officials who are trying to plan a response to the coronavirus outbreak are missing a critical piece of information — the number of health care workers who have tested positive for the disease. Washington state faced the first major outbreak of COVID-19 in the nation, but health officials have not kept track of how many doctors and nurses have the disease. SENT: 860, words, photos.

VIRUS OUTBREAK-NEW YORK — A slight dip in new coronavirus deaths in New York over the last 24 hours may be a glimmer of hope that the spread is slowing, Gov. Andrew Cuomo said as overall fatalities in the state climbed to nearly 4,200. Cuomo said it was too soon to determine whether the pandemic had reached its apex. SENT: 570 words, photos.

VIRUS OUTBREAK-AFRICA’S ECONOMIC BLUES — The global economic crisis linked to the coronavirus could wipe out jobs for millions across the African continent, many who live hand-to-mouth with zero savings. One official says that “the economy is frozen in place. And with that, of course, all the jobs are gone.” SENT: 1,030 words, photos. With VIRUS OUTBREAK-AFRICA — South Sudan has announced its first case of COVID-19, making it the 51st of Africa’s 54 countries to report the disease. SENT: 410 words, photos.

VIRUS OUTBREAK-MINE EXPLOSION — A planned public gathering was shelved on the 10th anniversary of the worst U.S. mining disaster in decades. Heartfelt speeches gave way to silent remembrances and individual prayers for the 29 men who died at the Upper Big Branch mine in West Virginia. SENT: 620 words, photos.

VIRUS OUTBREAK-ONE GOOD THING-SIDEWALK ART — Sidewalk notes bring smiles to hospital staff during virus. In recent days, workers at New Orleans’ Ochsner Medical Center who take the familiar stroll from the parking lot to the main entrance have been greeted with expressions of gratitude from an unnamed artist, sketched out on the sidewalk. “If you’re just arriving, thank you for what you’re about to do,” says one. SENT: 300 words, photos.

VIRUS OUTBREAK-BRITAIN-THEN AND NOW-PHOTO GALLERY — London, a city of ceaseless crowds, has been stilled by the new coronavirus. Streets, squares, shopping districts and sports stadiums have been emptied since the city, like others around the world. went into effective lockdown in March in an attempt to slow the spread of the new coronavirus. SENT: 410 words, photos.

VIRUS OUTBREAK-GERMANY-CIDER — How does a traditional German restaurant comply with the untraditional demands of the coronavirus era? By transforming itself into a drive-thru. SENT: 270 words, photos.

VIRUS OUTBREAK-TRUMP'S AGENDA — President Trump is taking an old political adage to heart: Never let a crisis go to waste. The coronavirus is projected to kill more than 100,000 Americans. It has effectively shuttered the economy, torpedoed the stock market and rewritten the rules of what used to be called normal life. But in this moment of upheaval, Trump and his advisers haven’t lost sight of the opportunity to advance his agenda. SENT: 960 words, photos.

VIRUS OUTBREAK-AIRCRAFT CARRIER — Defense Secretary Mark Esper says the firing of a Navy captain who sought help for sailors on his aircraft carrier where the coronavirus was present was a case of holding leaders “accountable.” But he says the matter is being investigated to see if it was proper. UPCOMING: 600 words, photos by 3 p.m.

ELECTION 2020-BIDEN — Joe Biden says the Democratic National Convention, already delayed until August because of the coronavirus, may need to take place online as the pandemic continues to reshape the race for the White House. SENT: 460 words, photos.

RWANDA-GENOCIDE-MASS GRAVE — A valley dam that authorities in Rwanda say could contain about 30,000 bodies has been discovered more than a quarter-century after the country’s genocide in which 800,000 ethnic Tutsi and Hutus who tried to protect them were killed. SENT: 260 words.

VIRUS OUTBREAK-APPALACHIAN TRAIL — Hikers on the Appalachian Trail face difficult decisions as the coronavirus pandemic worsens: postpone a dream or ignore warnings and keep hiking. Alexandra Eagle and Jonathan Hall planned for a year before setting out March 9 to hike the 2,190-mile trail for their honeymoon. SENT: 890 words, photos.

VIRUS OUTBREAK-TESTING — Home testing for the new coronavirus may sound like a good idea, but U.S. regulators say it’s still too risky. They’ve stopped companies that quickly launched home-testing kits until they can show their products can accurately detect the virus. SENT: 890 words, photos.

VIRUS OUTBREAK-OIL — The global economic crisis caused by coronavirus has devastated the oil industry in the U.S., which pumps more crude than any other country. In the first quarter, the price of U.S. crude fell harder than at any point in history, plunging 66% to around $20 a barrel. A generation ago, a drop in oil prices would have largely been celebrated in the U.S., translating into cheaper gas for consumers. But today, those depressed prices carry negative economic consequences, particularly in states that have become dependent on oil to keep their budgets balanced and residents employed. SENT: 980 words, photo.

FBN-OBIT-TOM DEMPSEY — Former NFL kicker Tom Dempsey, who played in the NFL despite being born without toes on his kicking foot and made a record 63-yard field goal, died late Saturday while struggling with complications from the new coronavirus, his daughter said. He was 73 years old. SENT: 790 words, photos.