Mexican President Andrés Manuel López Obrador said Sunday there will be no huge economic stimulus program as the country faces the threat of coronavirus-induced crisis almost certainly unlike any it has seen in the past century.

Instead, the administration will expand his signature social programs, continue to prop up the heavily indebted state-owned oil company, deepen the government’s austerity campaign and do everything possible to avoid taking on more debt.

“There is a lesson that we have learned well and that we don’t forget,” López Obrador said to an empty and echoing National Palace patio. “An economic model that only benefits minorities does not yield general well-being, but on the contrary engenders public misery and violence.” 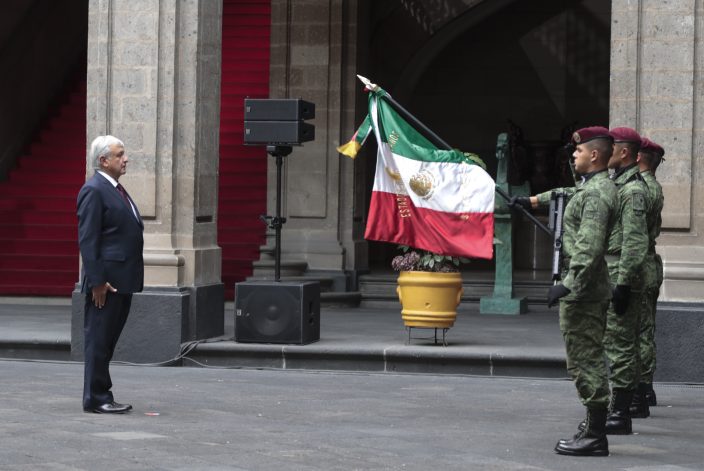 Mexican President Andres Manuel Lopez Obrador salutes the flag after speaking at the National Palace in Mexico City, Sunday, April 5, 2020. Mexico's Treasury reduced its forecast for the year this week to a contraction of the Mexican economy, which was already in a technical recession. López Obrador, however, has labeled the situation a "transitory crisis" and says things will be good again soon. (AP Photo Eduardo Verdugo)

The economic reactivation plan remains consistent with his administration’s priority of helping Mexico’s most vulnerable through greater public spending on social welfare, keeping people employed and cutting costs in the sprawling government, he said.

As an example, he said the top level of government bureaucrats — from undersecretaries on up to him — will have their salaries reduced and give up their annual year-end bonuses.

López Obrador quoted U.S. President Franklin D. Roosevelt, who he described as that country’s best president “We have always known that heedless self interest was bad morals, we now know that it is bad economics.” 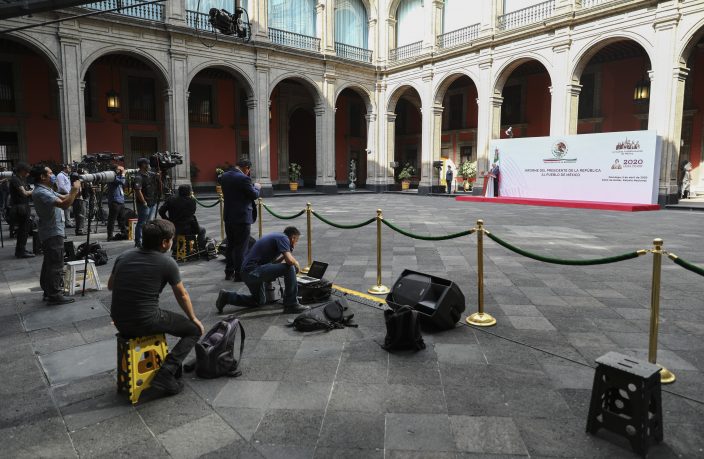 Mexican President Andres Manuel Lopez Obrador speaks at the National Palace in Mexico City, as the press keeps their distance, Sunday, April 5, 2020. López Obrador spoke to the nation about his economic recovery plan. Mexico's Treasury reduced its forecast for the year this week to a contraction of the Mexican economy, which was already in a technical recession. Mexico's government has broadened its shutdown of "non essential activities," and prohibited gatherings of more than 50 people as a way to help slow down the spread of COVID-19. The one-month emergency measures will be in effect from March 30 to April 30. (AP PhotoEduardo Verdugo)

Before the speech Sunday, the primary association of Mexican industries, Concamin, warned in a statement that the pandemic could cause Mexico’s worst recession in a century. It called for “support to businesses to avoid the temporary closure of hundreds of thousands of them.”

Thus far, López Obrador has mostly talked about protecting the country’s poorest and placed special emphasis on those working in the informal half of Mexico’s economy. The industrial chamber made multiple references to the government’s support being widely inclusive.

López Obrador has praised billionaire Carlos Slim for his commitment to not laying off any workers during the crisis and urged other business owners to follow his example. The president has said that only workers in essential businesses should still be going to work and that those who stay at home should continue to be paid.

But he tried to appear open while not making any promises. Last week he received several of the country’s top businessmen and on Saturday he tweeted a photograph of a video call he had with BlackRock Chairman and CEO Larry Fink, during which they exchanged “opinions about the coronavirus and the deterioration of the global economy.”

Even before the pandemic, Mexico’s economy had already been in recession. Then last week, Mexico’s Treasury predicted the country’s economy will contract as much as 3.9% in 2020 because of the pandemic, and private analysts are making even direr predictions.

The Bank of America predicted Thursday that Mexico’s GDP could contract 8% this year. That would be a bigger downturn than during the 2009 global recession, complicated in Mexico by the H1N1 pandemic, when GDP decreased 6.5%. It would also be worse than the December 1994 peso crisis, following which the country’s GDP fell 6.2% in 1995.

A close economic partner of the United States, Mexico will expect to receive some benefit from the huge $2 trillion stimulus package approved there.

On Sunday, López Obrador continued to strike an optimistic tone.

“This crisis is passing, transitory,” he said of the pandemic. “Soon normality will return. We will overcome the coronavirus. We will reactivate the economy and Mexico will continue standing showing the world its glory and its greatness.”

Mexico has reported 79 deaths related to the virus and nearly 2,000 confirmed infections.

For most people, the coronavirus results in mild or moderate symptoms, such as fever and cough that clear up in two to three weeks. But it can cause more several illness, including pneumonia and death, for some, especially older adults and people with existing health problems.

The new coronavirus has caused a global pandemic that has sickened at least 1.2 million, killed more than 69,000 worldwide, crippled economies and forced restrictions on the movement of millions of people in an effort to stop the virus from spreading and overwhelming health care systems.

Supported only by stuffed toys lef ...