Bobby Mitchell, the speedy NFL offensive star of the late 1950s and 1960s who became the Washington Redskins' first black player on the way to a Hall of Fame career, has died. He was 84.

Mitchell split his career with the Cleveland Browns and Redskins and was inducted into the Pro Football Hall of Fame in 1983. The Hall of Fame said Sunday night that Mitchell's family said he died in the afternoon but didn't provide any other details.

“The game lost a true legend today,” Hall of Fame President & CEO David Baker said in a statement. “Bobby was an incredible player, a talented executive and a real gentleman to everyone with whom he worked or competed against.” 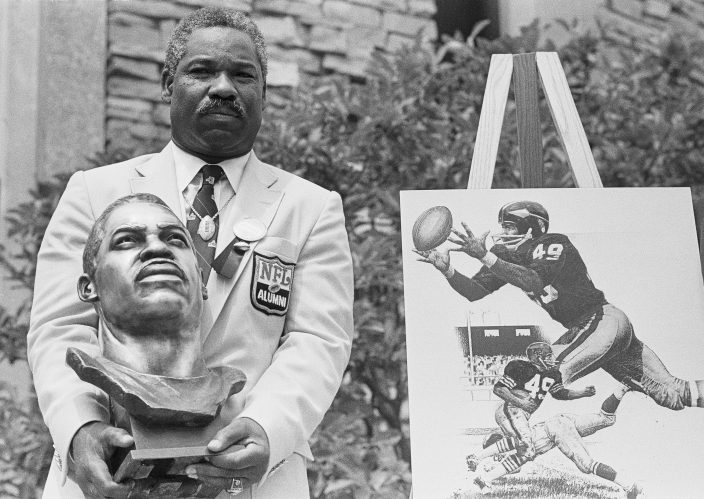 FILE - In this July 30, 1983, file photo, former Cleveland Browns and Washington Redskins halfback and wide receiver Bobby Mitchell poses with his bronze bust after being inducted into the Pro Football Hall of Fame in ceremonies in Canton, Ohio. Mitchell, the speedy late 1950s and ’60s NFL offensive star the Browns and the Redskins, has died. He was 84. The Pro Football Hall of Fame said Sunday night, April 5, 2020, that Mitchell’s family said he died in the afternoon. (AP PhotoGus Chan, File)

When Mitchell joined the Redskins in 1962, they became the last NFL team to integrate. After playing his first four seasons in Cleveland, he spent seven more with Washington and retired with the second-most combined offensive yards.

“His passion for the game of football was unmatched by anyone I have ever met,” Redskins owner Daniel Snyder said. “Not only was he one of the most influential individuals in franchise history, but he was also one of the greatest men I have ever known. He was a true class act and will be sorely missed.”

Retired NFL running back Brian Mitchell, who has no relation to Bobby but became friends with him, said he learned from the Hall of Famer, “Tough times don’t remain, tough people do, and you don’t let what you go through change who you are unless it’s for the better."

“I’m sure there was people saying stuff to him and doing things that (ticked) him off, but he wasn’t bitter,” Brian Mitchell said. “When you look at him when he was working for the Redskins early on, many people felt Bobby should’ve been the general manager of the Washington Redskins. He didn’t get bitter. He kept doing the things he can do.”

Bobby Mitchell said during a 2015 episode of Showtime's “60 Minutes Sports" that he understood pretty quickly upon signing in Washington “there was no one in this town used to having a black star.” Friend and fellow Hall of Famer Jim Brown took it one step further.

“Bobby was an individual that was thrown into the arena of being a victim for no reason,” Brown said. “He had to suffer for being black more than any person I know that played football at the time I played. with that kind of ability, if he were white, everybody on this earth would know who he was.”

Mitchell played halfback for the Browns from 1958-61 and moved to flanker with the Redskins, leading the NFL in receiving yards in 1962 and 1963. He was a three-time All-NFL selection, played in four Pro Bowls and his 7,954 all-purpose yards were the second-most in league history when he retired in 1968.

After retiring, Mitchell became active in the community and held an annual golf tournament raising funds for the Leukemia & Lymphoma Society since 1980.

""You look at Bobby, his career was a Hall of Fame career, but I know for African-American people, he was a social activist, as well," Brian Mitchell said. “Not only was he a great football player and a guy who would go out there and fight for the rights of his people but he was also a guy who was a philanthropist, a guy doing everything that you’re supposed to do.”

Mitchell grew up in Hot Springs, Arkansas, played baseball in high school and starred in track and football at the University of Illinois. The Hall of Fame flag on the museum’s campus in Canton, Ohio, will be flown at half-staff in Mitchell’s memory.

When the U.S. recognized Venezuela ...

A rookie at the major league minim ...