The commander of the U.S. 7th Fleet visited the leadership of the USS Theodore Roosevelt in Guam, where the aircraft carrier is being cleaned after an outbreak of COVID-19 among its crew. 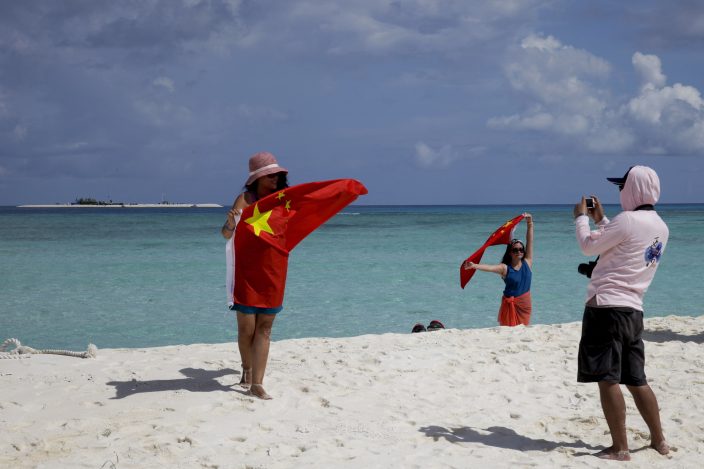 FILE - In this Sept. 14, 2014, file photo, Chinese tourists take souvenir photos with the Chinese national flag as they visit Quanfu Island, one of Paracel Islands of Sansha prefecture of southern China's Hainan province in the South China Sea. Vietnam’s foreign ministry on Friday, April 3, 2020, said a fishing boat with eight Vietnamese fishermen on board was “carrying out normal fishing activities” the previous day in waters near the Paracel islands that Vietnam claims but which are controlled by China. It was then “hindered, rammed and sunk” by a Chinese coast guard vessel, the ministry said. (AP PhotoPeng Peng, File)

Vice Adm. Bill Merz arrived Sunday to meet with the crew of the Nimitz-class carrier and area leadership as part of efforts to provide support for work to make ship ready to return to service, the 7th Fleet said in a press statement.

Defense Secretary Mark Esper said Sunday that about half the carrier's nearly 5,000 sailors had been tested for the coronavirus so far. He said all of the 155 who are infected have mild or moderate symptoms and none was hospitalized.

Sailors from the ship are being isolated at Guam hotels while the ship is cleaned. 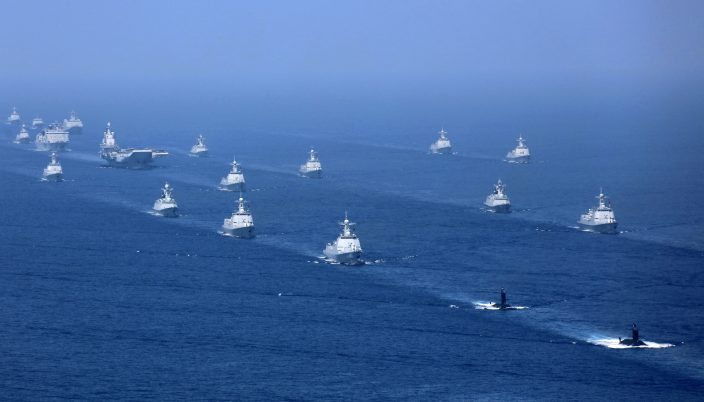 FILE - In this April 12, 2018, file photo released by China's Xinhua News Agency, the Liaoning aircraft carrier is accompanied by navy frigates and submarines conducting an exercises in the South China Sea. Despite the coronavirus outbreak, China is keeping up with military exercises around Taiwan at the northern edge of the South China Sea. (Li GangXinhua via AP, File)

The ship’s commander, Capt. Brett Crozier, was fired for going outside of the chain of command in asking for help for the outbreak, in a decision now under review.

In Asia, a carrier presence is central to what the Pentagon has identified as a bigger focus on China, including its militarization of disputed areas of the South China Sea.

Vietnam has protested what is says was the ramming and sinking of one of its fishing boats by a Chinese coast guard vessel.

Vietnam’s foreign ministry on Friday said the fishing boat No. QNg 90617 TS with eight Vietnamese fishermen on board was “carrying out normal fishing activities” the previous day in waters near the Paracel islands that Vietnam claims but which are controlled by China. It was then “hindered, rammed and sunk” by a Chinese coast guard vessel, the ministry said.

China’s action violates understandings between the sides and the spirit of a regional agreement on avoiding conflict, it said. Vietnam has lodged a protest with the Chinese embassy and demanded China investigate, discipline the responsible officers and compensate the fishermen, it said.

China responded with its own statement accusing the Vietnamese boat of illegally entering Chinese waters and said collided with the Chinese ship Haijing 4301 after conducting “dangerous actions." All eight Vietnamese sailors were rescued by the Chinese ship and admitted to wrongdoing, China Maritime Police spokesman Zhang Jun was quoted as saying in a statement from the bureau.

China seized the islands from Vietnam late in the last century and frequent confrontations have occurred there.

CHINA KEEPS UP EXERCISES AROUND TAIWAN DESPITE VIRUS OUTBREAK

Despite the coronavirus outbreak, China is keeping up with military exercises around Taiwan at the northern edge of the South China Sea.

The drill included practicing tactics to evade enemy aircraft as well as carrying out early-warning, reconnaissance and surveillance missions, the report said.

It also included simulated combat between two groups of fighter jets, according to the report.

China has increasingly staged aerial drills around Taiwan, including circumnavigating the island it claims as its own territory, to be conquered by military force if necessary.

Taiwan and China have overlapping claims in the South China Sea, although Taiwan has limited its activities to its island base in the Spratly group and the Pratas islands southeast of Hong Kong.

The Hong Kong newspaper South China Morning Post quoted experts as saying was exercise was intended to “enhance China’s intelligence-gathering capabilities to better monitor activities at sea and in the air."