Quibi may specialize in small, bite-sized videos, but its volume of shows is large. The media platform launches Monday with 175 new original shows — everything from scripted series, comedic diversions, deep dramas and celebrity fluff. Here's a look at some of the notable and less notable shows.

Liam Hemsworth stars as a father-to-be with huge bills and a terminal illness in this high-end thrilling series that feels like watching a big-budget film. Christoph Waltz plays a man with an intriguing offer for our hero: Be prey for a bunch of hunters and leave your wife and child millions. The idea of hunting humans for sport has a long history, and this series comes just a few weeks after the clunky film “The Hunt” was released. But this Quibi version is a masterclass in how the medium can create gripping yet tiny chapters.

This image released by Quibi shows Laurence Fishburne, left, and Stephan James in a scene from "#FreeRayShawn." This engrossing crime drama centers on fast food worker who we meet zooming through the back streets of New Orleans with what seems like every city officer on his tail. He's been set up by police on a drug deal and takes refuge inside his apartment building with his girlfriend and child. (Quibi via AP)

Each episode of this very adult and harrowing tale is engrossing and perfectly paced. Sophie Turner stars as a young woman with suicidal tendencies who survives a plane crash and fights to stay alive in a snowy wasteland alongside another passenger played by Corey Hawkins. It looks and feels like prestige Hollywood fare, and Turner is superb as a woman haunted by her own illness. 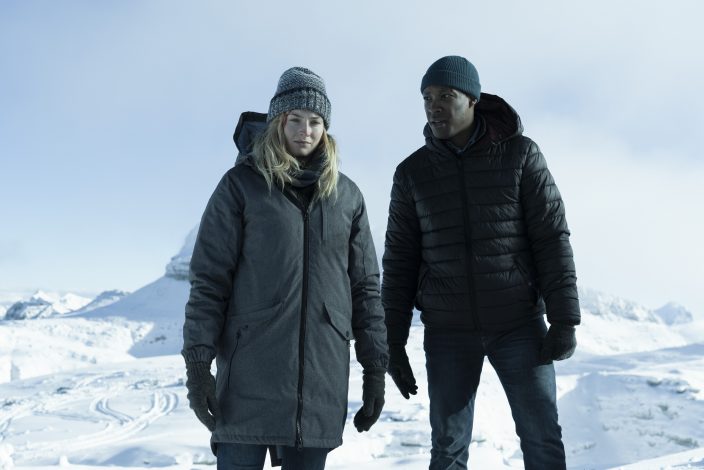 This image released by Quibi shows Sophie Turner, left, and Corey Hawkins in a scene from "Survive." Turner stars as a young woman with suicidal tendencies who survives a plane crash and fights to stay alive in a snowy wasteland alongside another passenger played by Hawkins. (Quibi via AP)

This engrossing crime drama centers on a fast food worker who we meet zooming through the back streets of New Orleans with what seems like every city officer on his tail. He's been set up by police on a drug deal and takes refuge inside his apartment building with his girlfriend and child. Each episode is tense and raw, with references to Black Lives Matter and a nod to the power of social media. It stars Stephan James as Rayshawn and an understated Laurence Fishburne as a sympathetic beat cop. The show is like a bag of chips: You can't stop after just a few episodes.

Seeing the rich and famous get pranked is always fun and it gets next level in a revival of “Punk'd.” Old host Ashton Kutcher has been replaced by Chance the Rapper, whose easy charm and good-natured humor is a key reason this series works. Some of the elaborate set-ups include Megan Thee Stallion frightened by a gorilla, performer Sabrina Carpenter finding her home infested by rats, and internet phenom Liza Koshy destroying a bat mitzvah. Other targets include Lil Nas X, Ty Dolla $ign, Adam Devine, Migos and French Montana. 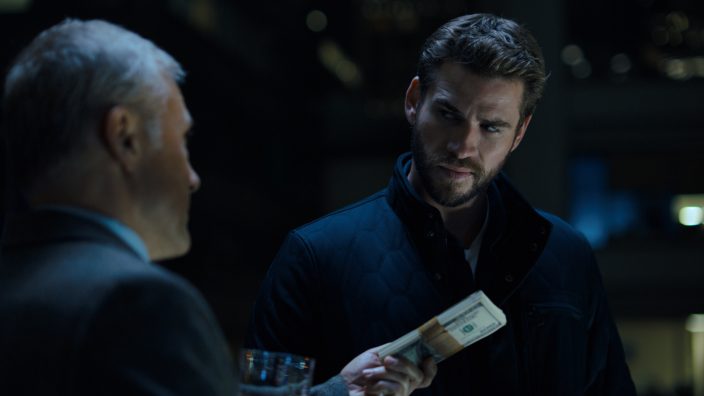 This image released by Quibi shows Christoph Waltz, left, and Liam Hemsworth in a scene from "Most Dangerous Game." Hemsworth stars as a father-to-be with huge bills and a terminal illness in this high-end thrilling series that feels like watching a big-budget film. Waltz plays a man with an intriguing offer for our hero: Be prey for a bunch of hunters and leave your wife and child millions. (Quibi via AP)

Chrissy Teigen as a judge? Why not? The model wears a robe and waves a gavel in a series of small claim cases — one features two boyfriends fighting over one of them buying the wrong silly sweater for someone — that don't have any of the testiness of “The People's Court.” Things are so relaxed that Teigen’s mother acts as the bailiff. Teigen is funny and patient and actually a pretty good judge. And, yes, hubby John Legend does show up sometimes. “Can I have one thing to myself ever?” she asks him.

Home renovation takes a dark turn in this series that sees notorious sites of violence get a makeover. "Murder and makeover don’t usually go together. But now that’s all going to change,” says designer Joelle Uzyel in the first episode. It's macabre and, at times, almost seems to mock HGTV's huge swath of programming. But the result of the first makeover (which takes three episodes) is breathtaking. The funnest part is watching the prim and elegant designer Mike Welch gradually lose his calm. “Dismembered?” he asks in horror when told what happened years ago at his new work site.

Young sports phenoms are the subjects of this series, hosted with a very light hand by soccer star Megan Rapinoe. Each documentary-style episode features interviews and competition footage of the stars, including of boxer Chantel Navarro, Olympic gold medal snowboarder Red Gerard and football player Korey Foreman. The portraits are deeply moving and personal, even if they have a tendency to veer toward adoration. Rapinoe only appears at the beginning of each episode to introduce the young athlete. Then she's gone, which seems a waste.

THE SHAPE OF PASTA

Foodies should bite on this well-made travelogue, as chef Evan Funke goes to Italy to find some of the more unique and forgotten shapes of pasta. That sounds a little ridiculous for a premise, but the filmmakers prove respectful and loving of the topic, sucking you in. In the first episode, Funke goes to a tiny Southern town where their handmade shape is going extinct. “We are trying to preserve the shape. It's our identity,” he is told. The show is beautifully shot but comes with a warning: If you tune in, you'll crave just one thing for dinner.

Jennifer Lopez leads this cringe-worthy show that really only rich people who want everyone to know they have a heart of gold would appreciate. Celebs give $100,000 to someone who touched their lives. Those people must then give half to someone else, so the celebrity can create “a chain of gratitude and kindness.” In Lopez's case, she gives the money — inelegantly, stacks of bills — to a mom with a girl with cerebral palsy. “You're so cute!” the girl says to Lopez. Unfortunately this back-slapping show has attracted the likes of Kristen Bell, Nick Jonas, Tracy Morgan, Aaron Rodgers, Kevin Hart and Karlie Kloss. Even the title is disingenuous.

This is another celebrity vanity project that'll leave you scratching your head. Offset, a member of Migos — and husband of Cardi B — has decided to show off his love of cars. In the first episode, he puts kids with cancer in tiny model supercars, like a McLaren P1 with a top speed of 4 mph. Why, you may ask, put confused, sick children in model Ferraris? They don’t even control the cars. But Offset and Cardi B are happy to take a victory lap. The second episode is all about Offset and Lil Yachty attempting Hollywood driving stunts. In the third, Offset visits Jay Leno and tours his vast car collection. The whole series looks a lot of fun for everyone but Offset.

One of the odder shows has a ferociously upbeat Reese Witherspoon narrating nature documentaries, with a twist. She focuses on female animals and seems to try to have them offer lessons of empowerment. The first episode focuses on sister cheetahs. “It's tough being a teenage cheetah,” she says, calling the two big cat sister “gutsy girls.” Then we watch the cheetahs stalk and brutally kill an impala. "Getting that belief in yourself and gaining confidence, that's what growing up is all about," a chirpy Witherspoon says. “Walk tall, fierce queens.” The second episode deals with ant queens and loses its way quickly, with Witherspoon awkwardly highlighting the violent queen's reproductive power. The footage is from the BBC and it is stunning, even if it shows a limit to holding the camera vertically.