The group crying began after the final scene of the last episode of ABC’s “Modern Family” was taped — with the notable exception of Ed O’Neill, who plays patriarch Jay Pritchett.

“I said, ‘No tears?’” recalled his co-star, Jesse Tyler Ferguson. “He said, you know what? Things hit me in a really weird way. I’ll be getting a facial in two weeks and, all of a sudden, I’ll burst into tears.’ And the only thing I took from that is, Ed gets facials?”

After 11 seasons, the “Modern Family” actors who’ve come to know each other well — maybe minus spa treatments — compare saying goodbye to leaving high school. They marvel at the friction-free years they worked together and make plans to stay in touch, relying for now on digital group chats during the pandemic-imposed isolation. 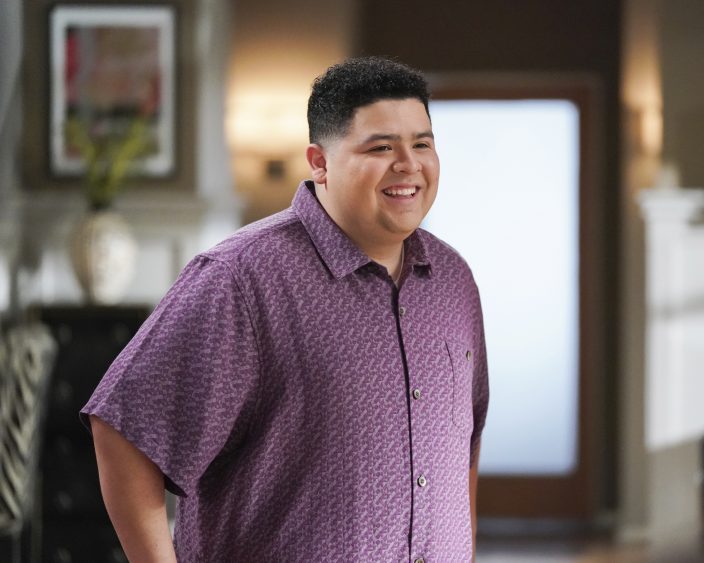 This image released by ABC shows Rico Rodriguez in a scene from the comedy series "Modern Family." The popular comedy series ends its 11-season run with a two-hour finale on Wednesday. (Eric McCandlessABC via AP)

In recent interviews, the cast and creators Steve Levitan and Christopher Lloyd shared favorite series moments, souvenirs they claimed, and what’s next for them. The hourlong finale airs at 9 p.m. EDT Wednesday, preceded at 8 p.m. by the retrospective special, “A Modern Farewell.”

— Whether high school seniors believe it or not, there’s more and better relationships and experiences ahead of them, said Eric Stonestreet, who played Cameron Tucker. But Stonestreet finds it hard to believe that’s the case after graduating from “Modern Family”: “We had a full-blown utopia, where we had a great group of people. We worked with professionals at the top of their game. And it’s going to be hard to recreate that.” 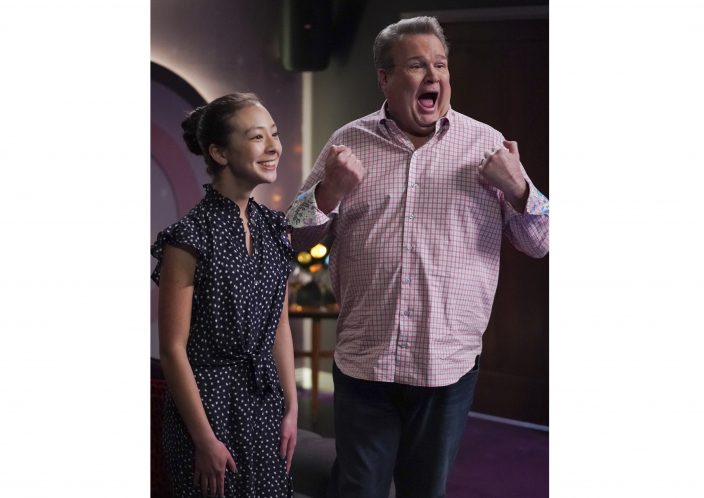 This image released by ABC shows Aubrey Anderson-Emmons, left, and Eric Stonestreet in a scene from "Modern Family." The popular comedy series ends its 11-season run with a two-hour finale on Wednesday. (Eric McCandlessABC via AP)

— Jesse Tyler Ferguson, who played Cam’s partner and eventually husband Mitchell Pritchett, said it was the convergence of reality and fiction that resounded for him. In a “Modern Family” scene, Mitch is seen watching news footage that included his real-life spouse (actor-producer Justin Mikita) demonstrating for legalized same-sex marriage in California. “It felt very like a circle moment. ... I couldn’t believe that I got to be married in real life, and then later I got to get married again on TV in front of millions and millions of people. It felt very important.”

—“It was the combination of being critically acclaimed as well as popular that made for a heady mix,” Lloyd said. “There’s crazy milestones, like when Mitt Romney was running against (President Barack Obama) and they both stated it was their favorite TV show. That doesn’t happen very often.”

— Ariel Winter, who played Alex Dunphy, says what she gained from the show includes her relationship with Nolan Gould, who played her sibling Luke Dunphy. Winter calls Gould “one of my best friends. He really is the little brother that I never had and that I love so much.” 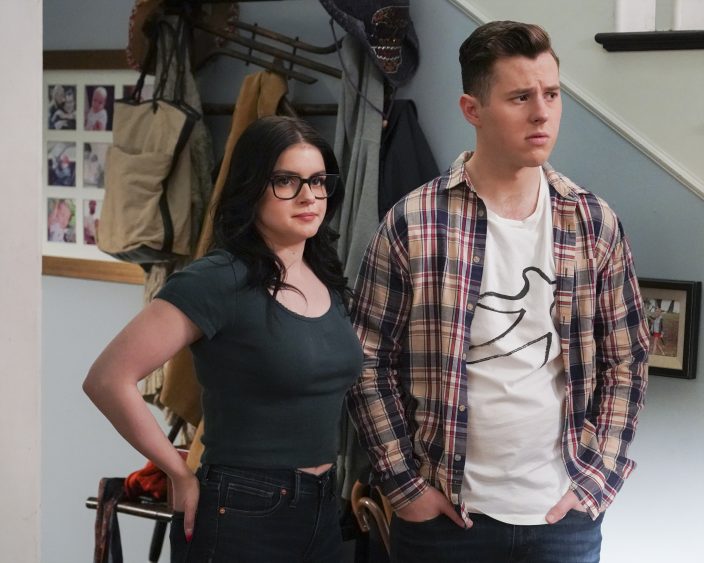 This image released by ANC shows Ariel Winter, left, and Nolan Gould in a scene from "Modern Family." The popular comedy series ends its 11-season run with a two-hour finale on Wednesday. (Eric McCandlessABC via AP)

— Julie Bowen (Claire Dunphy) spent a fair amount of off-camera time in a hallway that mostly served as a waiting area for scenes shot elsewhere in the Dunphy house. Cast photos decorated the walls, along with paintings of birds that Bowen requested as a keepsake. The artwork had “so much to do with that set, and being there and feeling at home,” she said.

— Winter says she may be the only cast member that didn’t request any set decorations. “I know it sounds weird, but for me, nothing stuck out as something I needed" as a memento, she said. Having spent half her life on the series, from age 11 to 22, “it’s ingrained in my mind. ... I have the memories, and I’m good with that.” 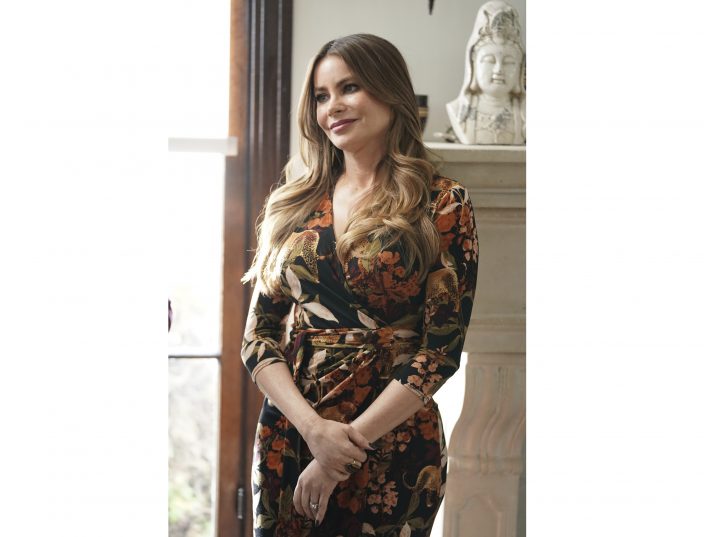 This image released by ABC shows Sofia Vergara in a scene from the series finale of "Modern Family." The popular comedy series ends its 11-season run with a two-hour finale on Wednesday. (Eric McCandlessABC via AP)

— Bowen had planned to focus on producing and directing, but then she got a call for a new series, “Raised by Wolves,” from “Will & Grace” creators David Kohan and Max Mutchnick, “an offer I could not turn down.” With the industry's coronavirus-caused production shutdown, “we’re in a holding pattern. ...I’m assuming there’s going to be life again. It’s really hard in this moment to know what’s what.”

— Ty Burrell, who played opposite Bowen as her husband, Phil, is in the voice cast of the animated comedy “Duncanville” and also has an eye on producing. “I was planning on taking time to be with my family over the course of this year," he said, a plan sealed by the health crisis. Being home with his young children is the silver lining.

— Rico Rodriquez, who played son Manny to Sofia Vergara’s Gloria Delgado-Pritchett, is a young man with big dreams. He and his sister started a production company to “write, produce, direct our own stuff,” and he’s open to outside opportunities to act as well. “I’m down for anything,” Rodriguez said.

— The last episode includes familiar comic moments of "Phil being Phil, Cam being Cam, Sofia being Sofia" said Lloyd, who wrote the second half-hour. But it also includes a "sweet emotional hug in there, which is another thing that audiences have come to expect from the show, and I think it’s a good balance.”

— Levitan, who wrote part one, says “Modern Family” has tried to bring "a little joy and happiness into people’s lives. ... I would say that now more than ever, if people can tune in for an hour and forget about all the dark things going on in our world today that would be wonderful.”

Lynn Elber can be reached on Twitter at https://twitter.com/lynnelber.

The coronavirus hasn’t been kind t ...

Employees of a major group of Fren ...