Defending his administration’s response to the coronavirus, President Donald Trump falsely asserted that travelers at U.S. airports are being routinely tested for COVID-19, made groundless accusations against a watchdog and wrongly claimed the Obama administration did nothing during a flu pandemic. 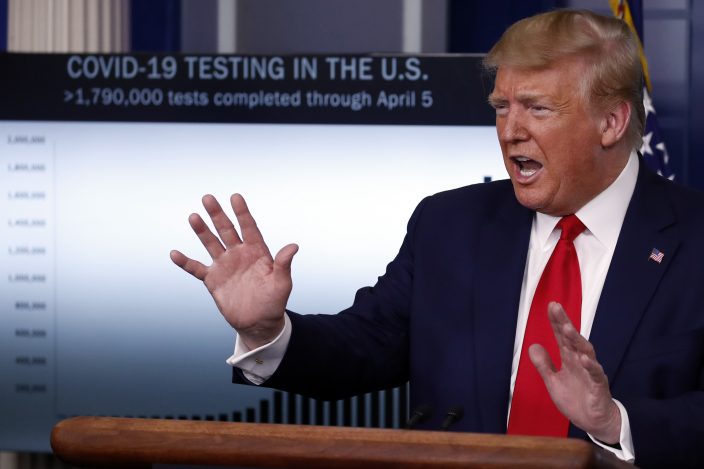 TRUMP, explaining his hesitancy to suspend U.S. domestic flights to stem spread of the virus: “They’re generally very, very empty planes. ... There’s also testing done when people get onto those planes and also when people get off the planes.” — news briefing Monday.

THE FACTS: False. There’s no evidence to support his suggestion that travelers at U.S. airports are being regularly tested, let alone when they both get on and off the planes.

There are coronavirus screenings of some passengers arriving at 13 major U.S. airports on international flights, which involve temperature checks and questioning by U.S. agents about possible symptoms. Some states are also screening passengers who are arriving from hard-hit coronavirus areas in the U.S. and asking them to self-isolate. None of that is the same as getting a COVID-19 test, and there are plenty of gaps in containment.

The screenings, for instance, can miss people who don’t yet show symptoms of COVID-19; while symptoms often appear within five or six days of exposure, the incubation period is 14 days.

The checks on international travelers are primarily conducted for American citizens, legal permanent residents, and their immediate families who recently visited certain countries — many parts of Europe, as well as China and Iran.

Some states including Florida and Texas also said they will screen airline passengers arriving from New York, New Jersey and Connecticut and ask them to self-quarantine for 14 days. Texas is also requiring screenings for people arriving from New Orleans.

TRUMP, on a report from the Health and Human Services Department’s watchdog that found hospitals faced severe shortages of coronavirus test supplies: “Did I hear the word inspector general? Really? It’s wrong. ... Could politics be entered into that?” — news briefing Monday.

TRUMP: “You didn’t tell me also that this inspector general came out of the Obama administration.” — news briefing Monday.

THE FACTS: His claims are groundless. There is no evidence that the report was “wrong” or politically motivated. And it's a politically expedient distortion to brand federal employees whose service spans administrations as creatures of the previous one.

It was based on a survey of 323 hospitals around the country in late March and reported described conditions. It did not make any judgments about the federal health department or the Trump administration.

With coronavirus cases rocketing toward their expected peak, the inspector general's office reported that a shortage of tests and long waits for results were at the root of mounting problems faced by hospitals.

Overseeing the report was Christi A. Grimm, who is acting as HHS inspector general. She is a career government manager who took over the position early this year in an interim capacity.

Grimm began her career with the agency in 1999 and has served under both Republican and Democratic administrations.

TRUMP: “Nobody has done more testing ... If (other countries) did the kind of testing proportionally that we are doing, they’d have many more cases than us.” — news briefing Monday.

THE FACTS: That’s flat wrong. While more tests mean more known cases, the U.S. lags proportionally in testing its citizens. South Korea, for example, actually has a higher rate of testing. It also has fewer known cases, both in absolute terms and as a percentage of its population.

The U.S. only recently surpassed South Korea in the total number of tests, even though both countries reported their first confirmed cases on the same day in January.

The U.S. count of infections is now going up fast in part because the virus is spreading and in part because of a test shortage that lasted weeks, as well as a backlog in laboratories reporting results. U.S. testing continues to be constrained by shortages of key supplies, including sampling swabs, and backlogs of tens of thousands of unprocessed tests.

Daily case counts are rapidly rising in the U.S. and are currently over 370,000. South Korea, which emphasized early widespread testing and strict containment, saw less of a spike in cases, and its curve has leveled off at 10,300. That would be close to 70,000 cases if its population were the same as the U.S.

THE FACTS: His suggestion that the Obama administration was oblivious and did nothing during the 2009 H1N1 pandemic, initially called “swine flu," is wrong.

Then, the Centers for Disease Control and Prevention’s flu surveillance network actually sounded the alarm, spotting two children in California who were the first diagnosed cases of the new flu strain. About two weeks later, the U.S. declared a public health emergency and CDC began releasing anti-flu drugs from the national stockpile to help hospitals get ready. In contrast, Trump declared a state of emergency in early March, seven weeks after the first U.S. case of COVID-19 was announced.

As for thousands dying, it actually turned out that the new H1N1 strain was less deadly than average seasonal flu. But even that comparison is problematic, because regular flu years are deadliest for the elderly while H1N1 was riskiest for younger people.

Survey: US factories sink in May for third straight mon ...

American factories slowed for the ...