Wisconsin's chaotic primary may just be the beginning. Both major parties are preparing for a monthslong, state-by-state legal fight over how citizens can safely cast their ballots should the coronavirus outbreak persist through November's election.

The outcome of the court battles –- expected to litigate mail-in voting rules, voter identification requirements and safe access to polls –- may have a significant impact on how many people turn out to vote in hundreds of elections across the country between now and November, including the race for the White House. It will likely play out in key presidential battlegrounds amid an already roiling debate over voting rights and protecting access to the ballot.

“We have already seen more litigation, even before COVID, than ever before in 2020,” said Marc Elias, a prominent attorney who represents the Democratic Party on voting issues. “What COVID has done is added fuel to that fire.” 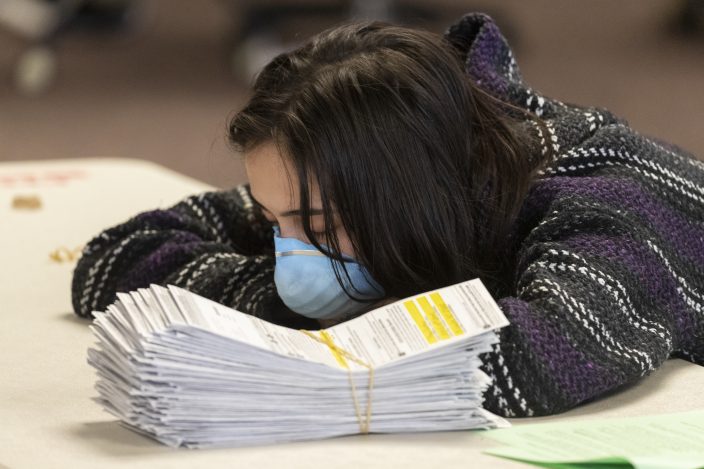 Elias said he expects to file lawsuits within the coming weeks against states that Democrats argue haven't taken adequate steps to protect voters and poll workers during the outbreak. The party is specifically pushing steps to make it simpler to request and return mail-in ballots.

Republicans are ready to fight back. President Donald Trump has already tried to portray voting by mail as suspicious and warned that it could lead to so many people voting that “you'd never have a Republican elected in this country again.” The Republican National Committee will spend some of the $10 million it set aside for presidential-year election-related litigation to fight back against Democratic lawsuits over the virus.

Tuesday’s presidential primary in Wisconsin was a preview of confusion the court fights can cause. After Democratic Gov. Tony Evers tried to delay the election at the last minute, a court initially postponed and tweaked the rules for the contest, only to have the U.S. Supreme Court on Monday night reinstate many of the original rules and the election. The election went on as planned — although Milwaukee opened just five of its 180 in-person polling places after hundred of poll workers declined to show up. Voters cast ballots while wearing protective masks and stood in long lines, trying to keep a safe distance so as not to spread or catch the virus that has killed 92 people in the state.

Only five states send ballots to all voters to be returned through the mail. Roughly one-third of states require a formal excuse to procure an absentee ballot that can be sent in remotely, including the swing state of New Hampshire, which has yet to designate the pandemic as a legitimate reason to get a mail ballot. Other states crucial to the presidential contest, like Wisconsin and North Carolina, require a witness to sign an application for a mail ballot — a requirement that can be difficult to meet for voters in quarantine.

In Texas, the state Democratic Party has already filed a lawsuit seeking to allow the pandemic to qualify as a legitimate excuse for any voter seeking an absentee ballot. The Republican National Committee, meanwhile, helped New Mexico Republicans try to stop that state's Supreme Court from allowing a request by county clerks to transform their June primary into an all-mail event. 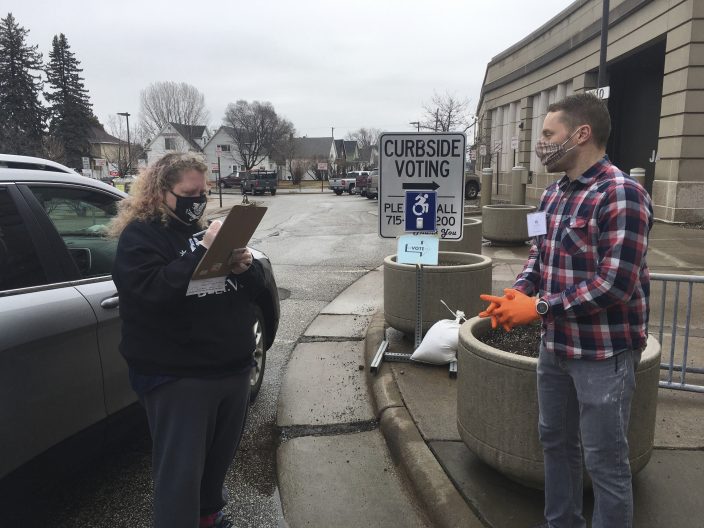 Richard Kaufman, right, a volunteer election official in Superior Wis., helps Betty Bockovich cast a vote at a curbside voting station set up outside the Government Center in Superior, Wis., Tuesday, April 7, 2020. Voters could ring a doorbell and poll workers would come outside to help them vote in the state's presidential primary election if they didn't want to go inside to cast their ballots because of the COVID-19 outbreak. (Dan KrakerMinnesota Public Radio via AP)

The party argues that such changes are premature and, in some cases, unworkable.

“Imposing a new system onto states unnecessarily will result in significant problems in the November election, and it is critical we work to preserve the integrity of the democratic process,” said Republican National Committee spokeswoman Mandi Merritt.

The Trump campaign has likewise laid down markers on what sort of changes it expects state Republicans to fight. Vote-by-mail options can "play a role during a pandemic by enabling at-risk voters to vote safely,” legal counsel Justin Clark said in a statement.

But, Clark added, “states should resist proposals that open the door to voting fraud such as mailing ballots to voters who haven’t asked for one.” Notably, some Republican secretaries of state, such as in Iowa and Ohio, have already moved to send mail ballots out widely.

Senate Republicans prevented measures from making it into the stimulus bill passed last month. Democratic leaders on Tuesday said the Wisconsin primary strengthened their resolve to try again in the next bill, but voting rights groups are pessimistic that will succeed.

Instead, advocates are trying to secure more funding for local elections offices. They got $400 million in the last stimulus but estimate at least $1.6 billion more would be needed to enable the states to prepare for a radically changed voting landscape in November.

“Making sure that our elections can be conducted fully and fairly is a very high priority for us," Senate Minority Leader Chuck Schumer told reporters Tuesday.

Still, voting rights advocates believe more litigation is inevitable as parties look closely at vote-by-mail procedures. Elias said Democrats are pushing for some standards, including a postage-paid return envelope, counting ballots postmarked by Election Day, allowing voters to resolve issues arising from questions about a signature and allowing groups to drop off and collect mail ballots from voters.

Democrats argue the latter provision, dubbed “ballot harvesting,” is essential for elderly voters and others isolated by the pandemic. But it's another red line for the Trump campaign.

“States should also limit the ballot harvesters who are incentivized by the Democrats to violate social distancing rules,” Clark said.

Rick Hasen, an election law professor at the University of California-Irvine, said he expects “a lot of litigation, especially in states that offer excuse absentee balloting.” But, he added, fighting over elections was already going to be intense before the outbreak.

Spain reports no virus deaths for first time since Marc ...

Spain on Monday reported no offici ...

As Trump rails against mail voting, some allies embrace it